Cali: a way out of crime

CALI, Colombia – city notorious for having the highest number of murders in the whole country. According to the official Police data, from January to May 2015 it totaled 540, while the authorities declare a decrease of 28% compared to 2014, which closed with 1,544 murders.
In the city there are hundreds of armed urban gangs (pandillas) devoted to theft, robbery, hired assassination and micro drug-dealing, and many of them are also linked to neo-paramilitary groups (Los Machos, Los Rostrojos and others) and the drug cartel.
Over time, Cali has received thousands of refugees from different conflict areas of in Colombia, resulting in neighborhoods overcrowded and characterized by extreme poverty (Aguablanca, Siloè, Petecuy, Sucre) and often marginalized from the rest of the city.
The conflict between armed groups for the control of areas devoted to micro-trafficking has determined over time the creation among various quarters of the so-called “invisible borders”, imaginary lines demarcating the zones of influence of the different gangs. Drawn with the blood of hundreds of deaths, also not directly related to gangs, these barriers forced the inhabitants to a life of fear of being involved in gunfights.
Many of the dead, as well as the murderers themselves, are often very young and in both cases victims of the violence that has destroyed thousands of lives for decades.
Unlike a few years ago, the Government is investing in security, strengthening the presence of the Police and founding the Unipol special section, constantly operating on the territory. However, in many areas the community maintains an attitude of rejection towards the Police, often accused of being itself an active part of the conflict and of using harsh methods.
The high rate of crime has encouraged many civilians and, in particular, artists to establish recreational and cultural associations that may offer young people a way out of the spiral of violence plaguing the city. Common areas have been created and continue to arise, where youngsters can meet and produce works and performances of various kinds (graffiti, dance, sports, street-art). 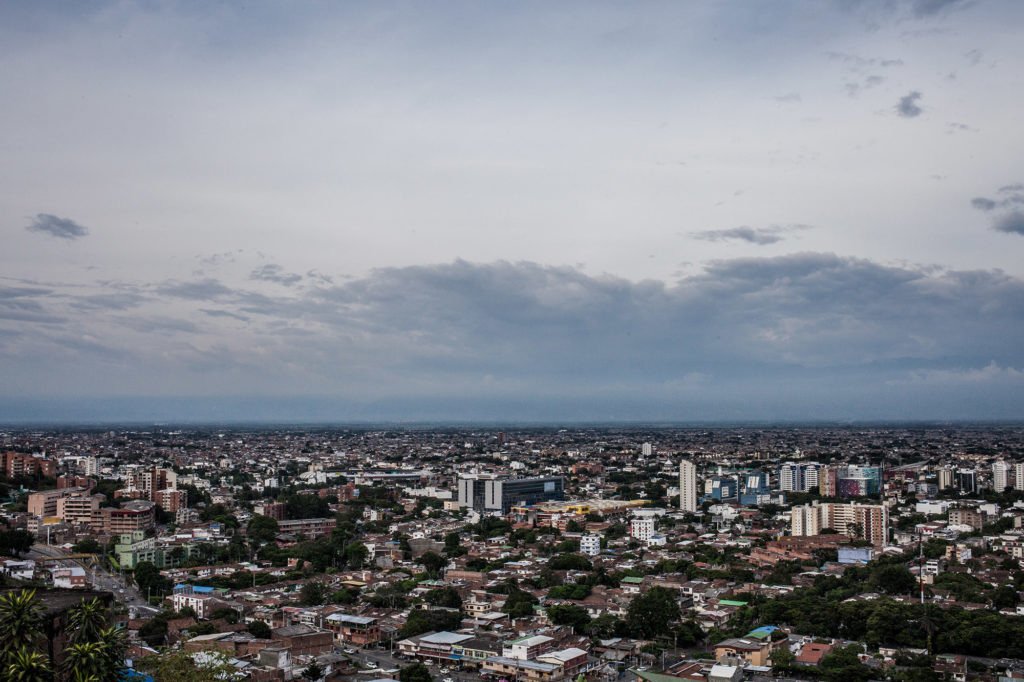 Panoramic view of Cali seen from the Siloé neighborhood. Cali is considered one of the most violent cities of Colombia. 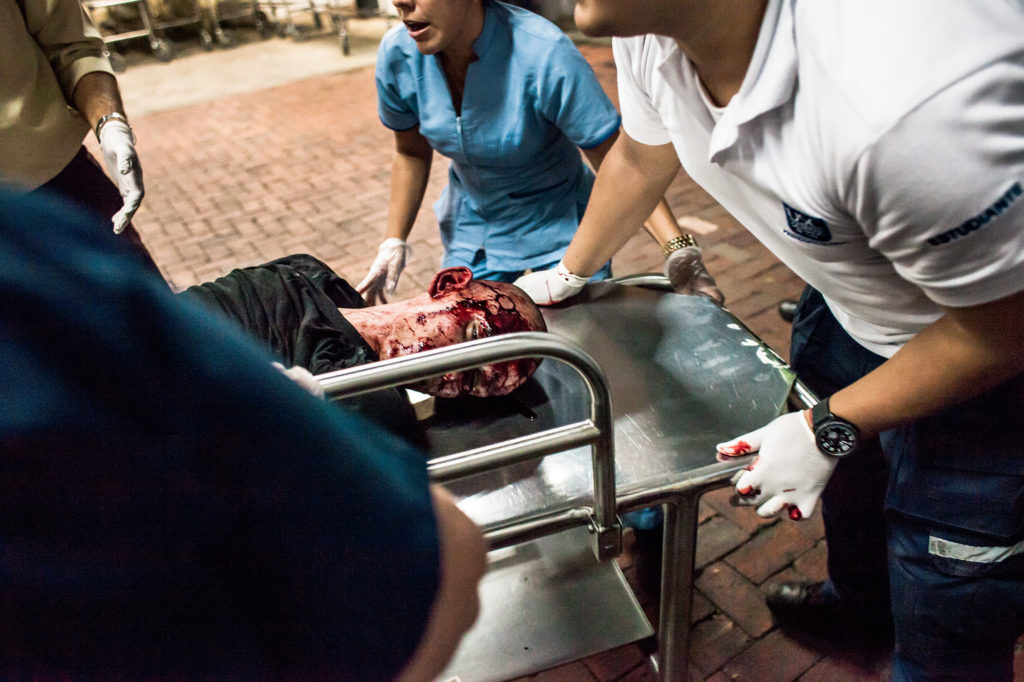 Del Valle Hospital: a young man is brought in ER after being shot, and died shortly afterwards. 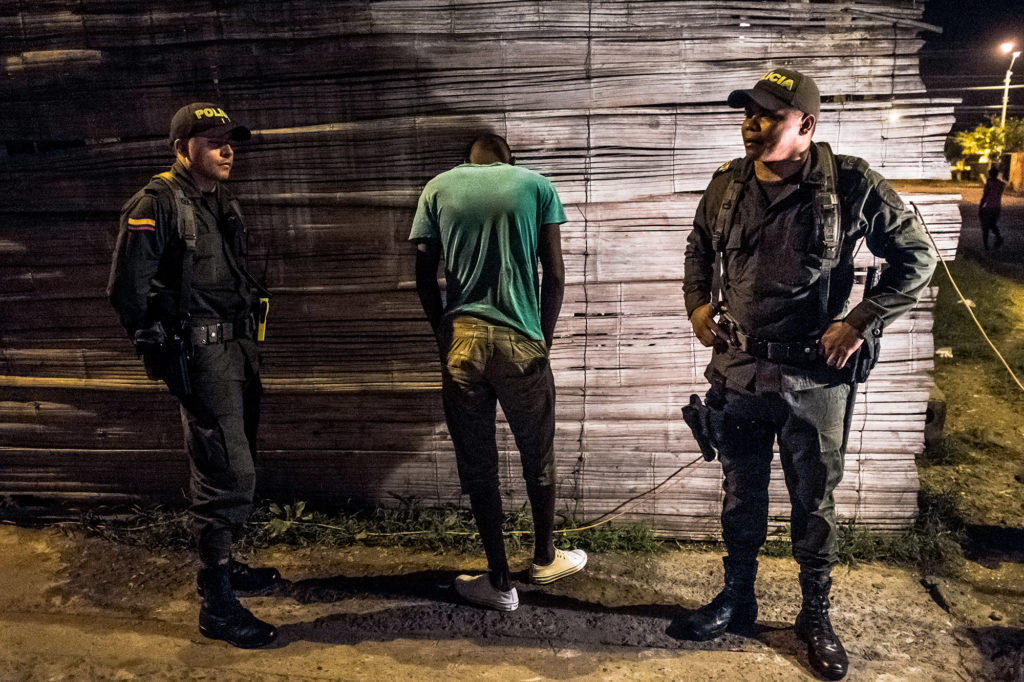 Young member of a gang being arrested by the Police during a patrol in the Aguablanca quarter.

Street artist kids performing with fire in the Siloé quarter. In this and in other dangerous neighborhoods, several cultural associations arose in order to provide the new generations with options different from criminality. 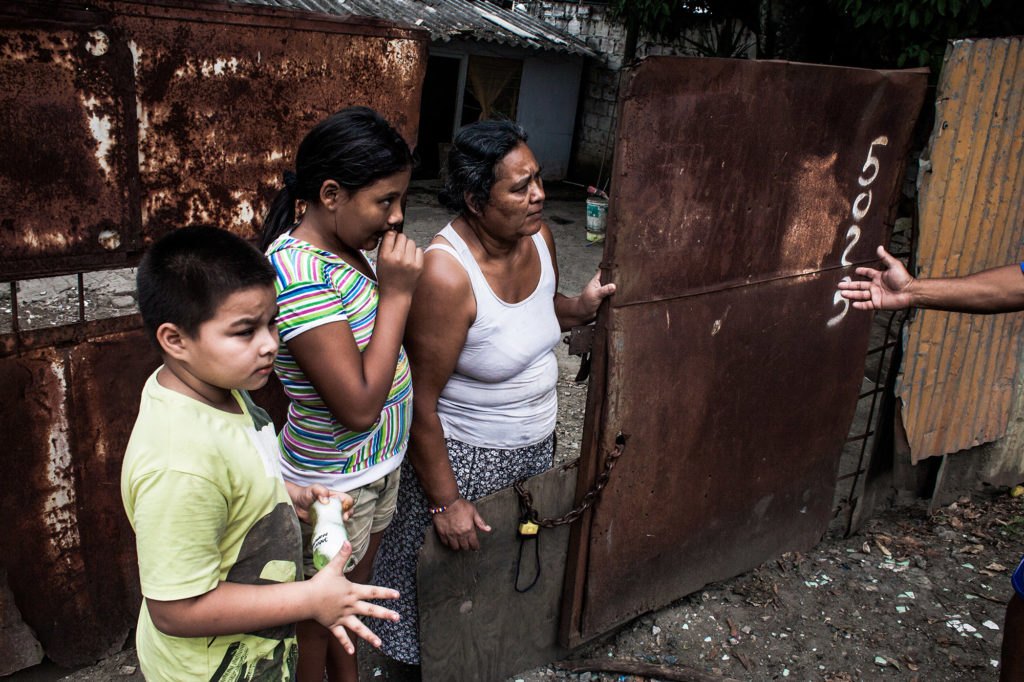 Family in the Petecuy quarter, historically one of the most violent areas of the city. Many people live in poverty and have lost their relatives due to criminality and gunfights. 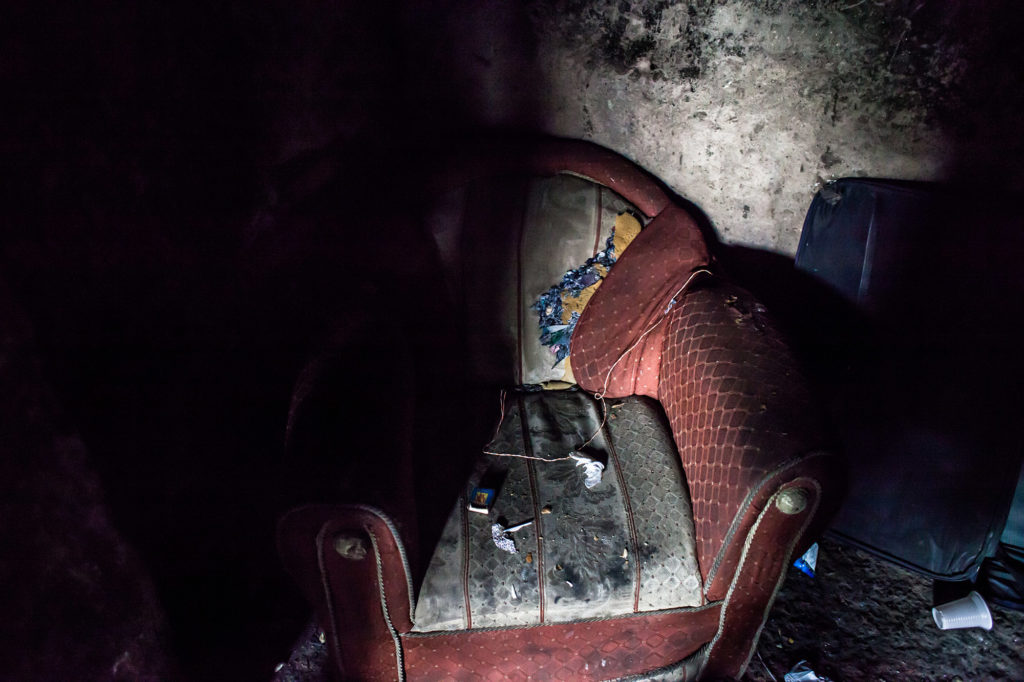 Remainings of shots of "basuco", a drug similar to crack, left on a destroyed armchair in an abandoned building in the Sucre quarter. 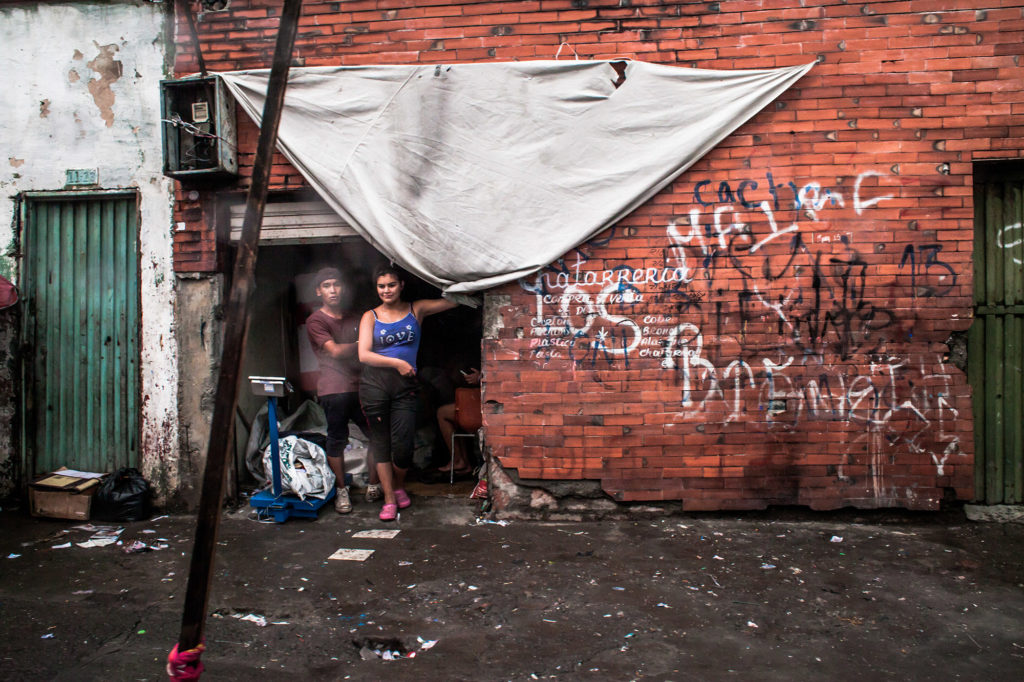 Young couple living in the Sucre quarter. There is a governmental project for the demolition of part of the area, in order to create a park for the city. 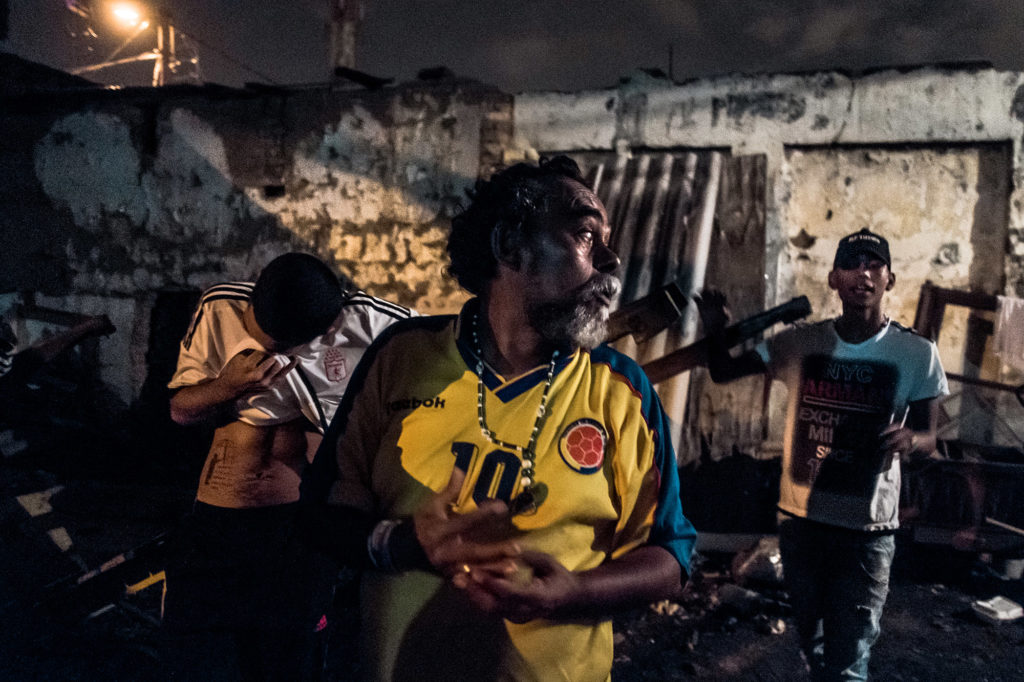 Members of a criminal gang in the quarter of Sucre. Gangs control the micro-traffic of drugs in the city, which is one of the main causes of fights among gangsters. 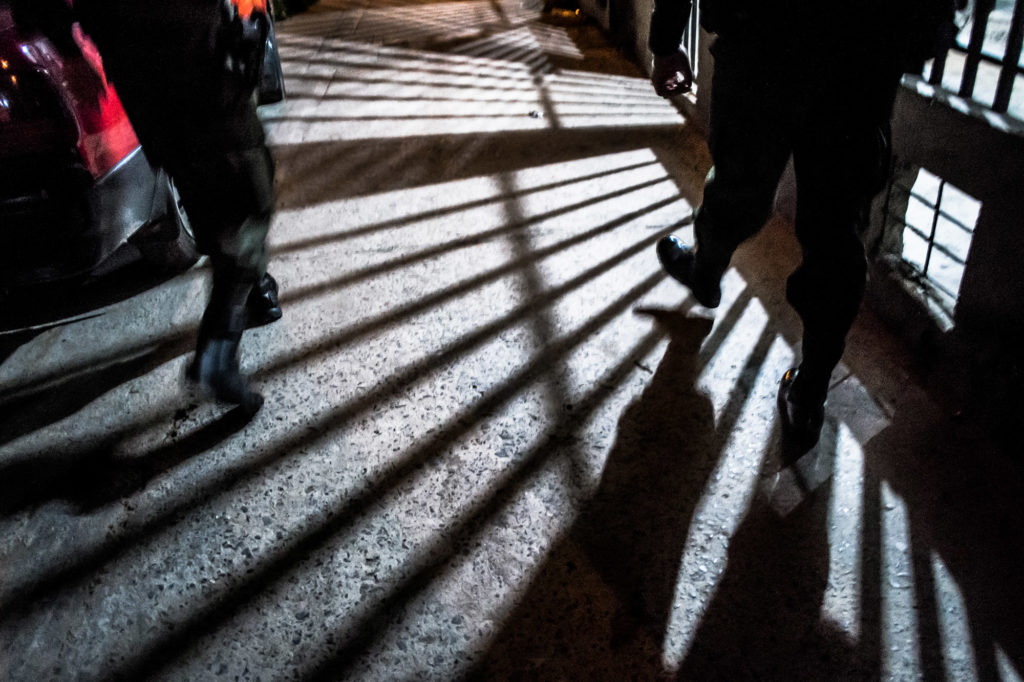 Policemen patrolling the area of Los Mangos in the quarter of Aguablanca, one of the poorest and marginalized of the city. The presence of the Police aims to avoid gunfights among gangs' members and within the so-called "invisible borders" within the neighborhoods. Invisible borders are boundaries established by the local gangs within quarters, for the control of micro-traffiking. These borders affect also the daily life of civilians, who often get accidentally involved into fights among gangs. 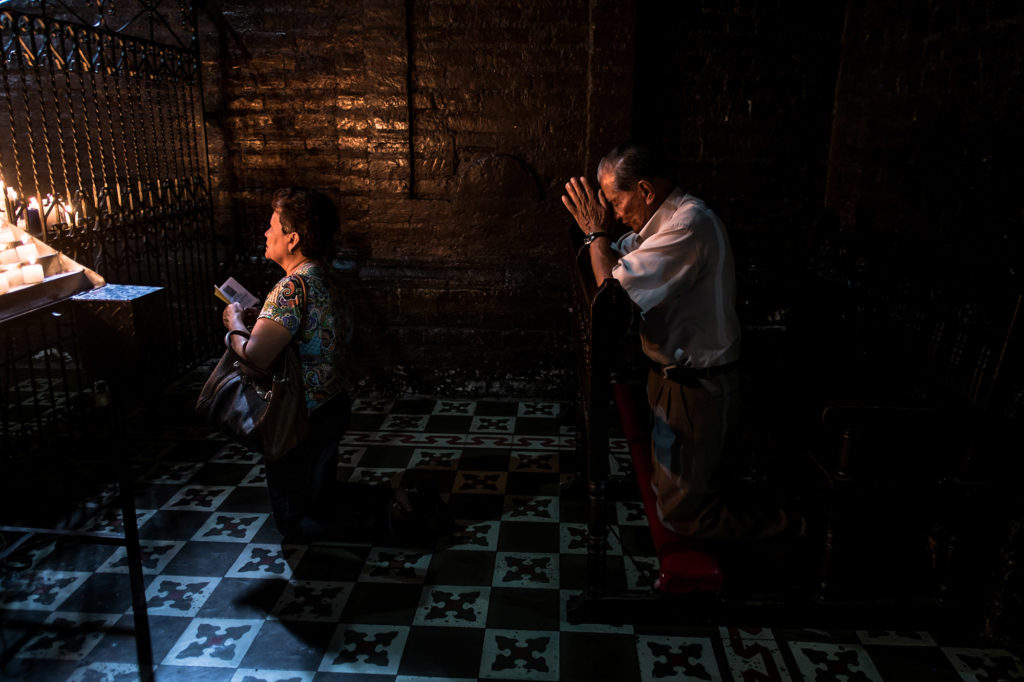 People praying in a church. Faith is very strongly felt within the population of Cali, as a reaction to violence and all the atrocities that happen so often in the city. 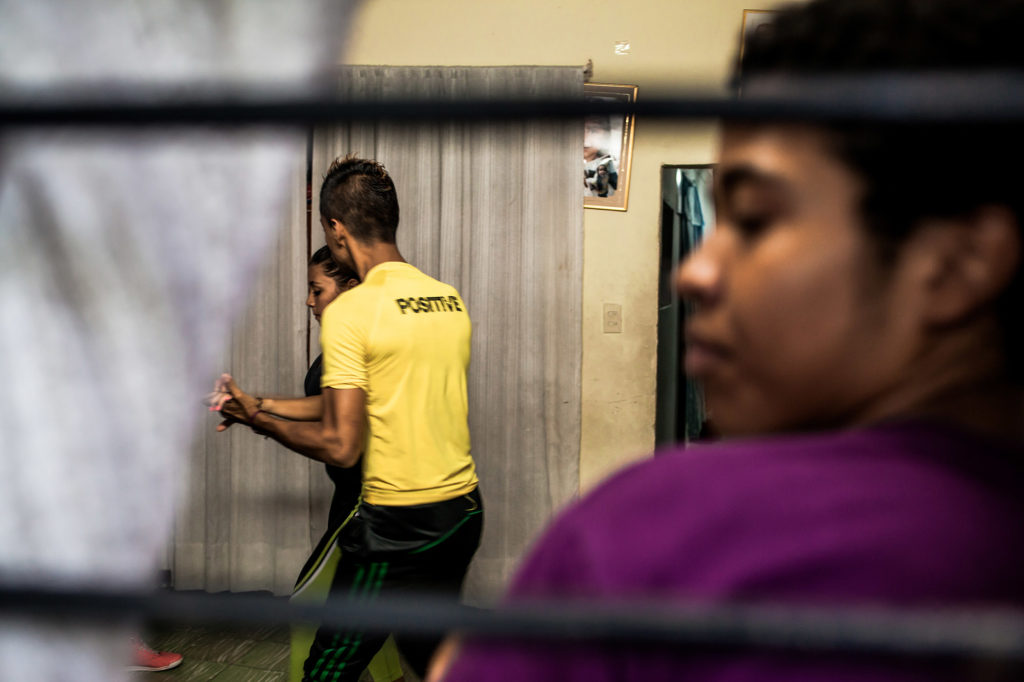 Couple dancing during a latin-american dance lesson in a cultural center in the Siloé neighborhood. Several associations are active in many quarters to offer an option to criminality through entertainment. 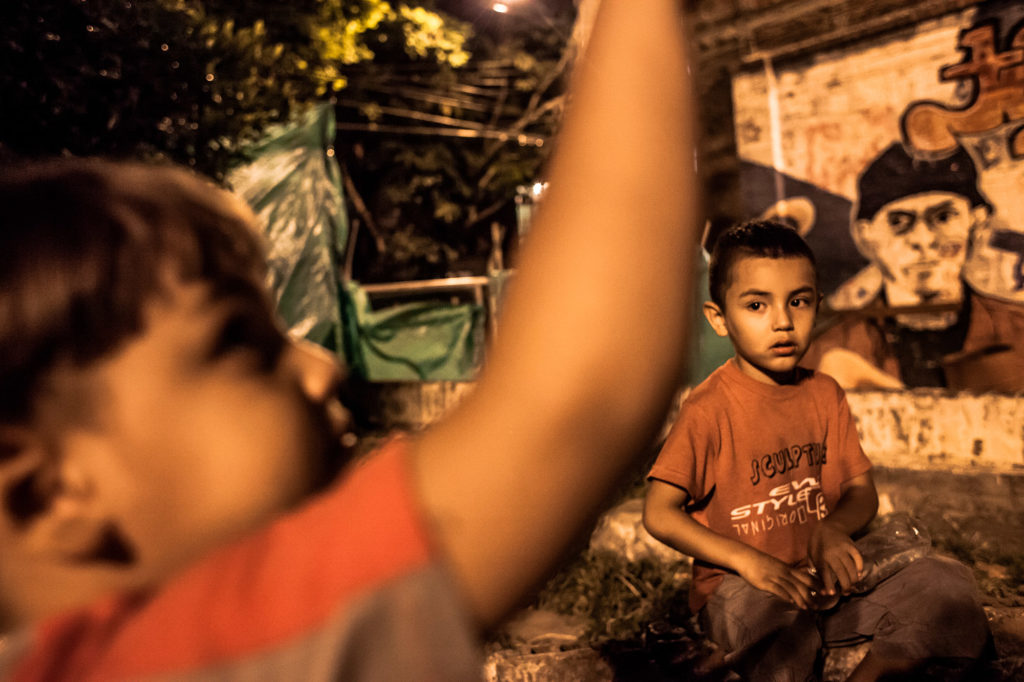 These two brother kids have traumatic memories of violence although being very young, after having witnessed the killing of their parents by a hit man. 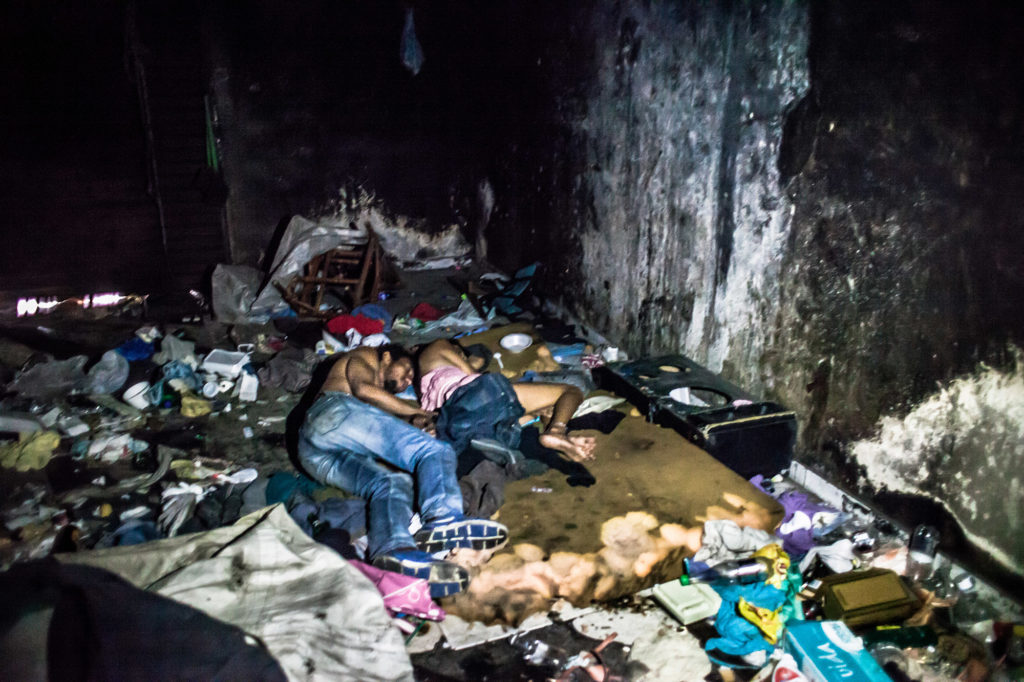 Couple of drug-addicts sleeping in an abandoned building in the Sucre quarter. This neighborhood is considered by the Police as a red-zone as for criminality and poorness. Although it is located very close to the city center, it is the quarter with the highest concentration of drug-addicts. 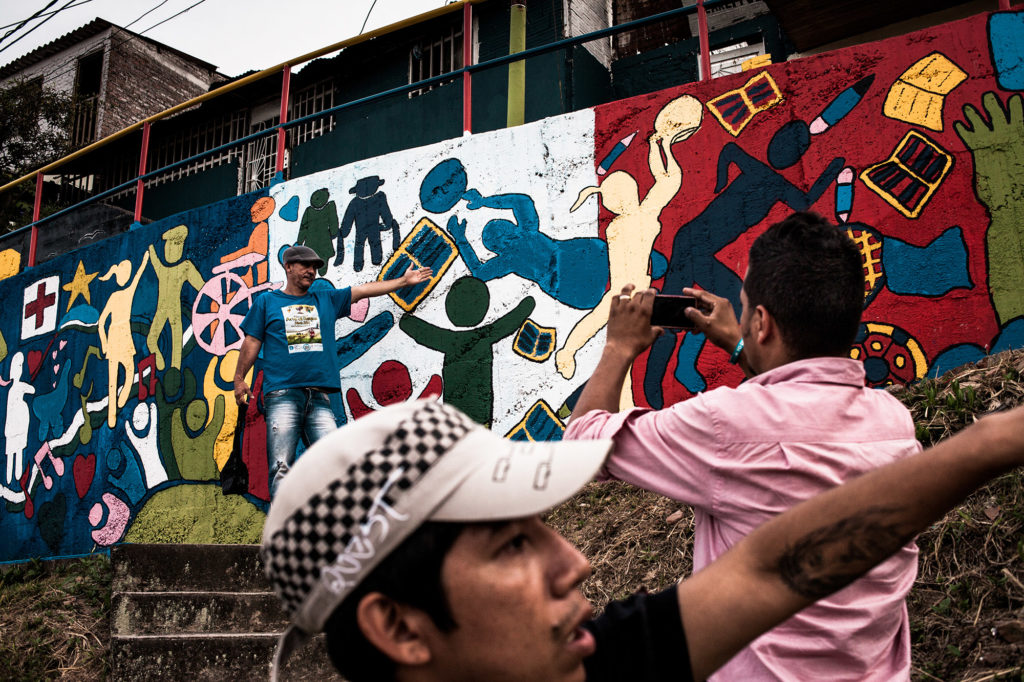 Wall paintings in the Siloé quarter being explained by the graffiti artist who made them. This painting was depicted in May 2015 in the place where an "invisible border" divided the quarter. Invisible borders are boundaries established by the local gangs within quarters, for the control of micro-traffiking. These borders affect also the daily life of civilians, who often get accidentally involved into fights among gangs. 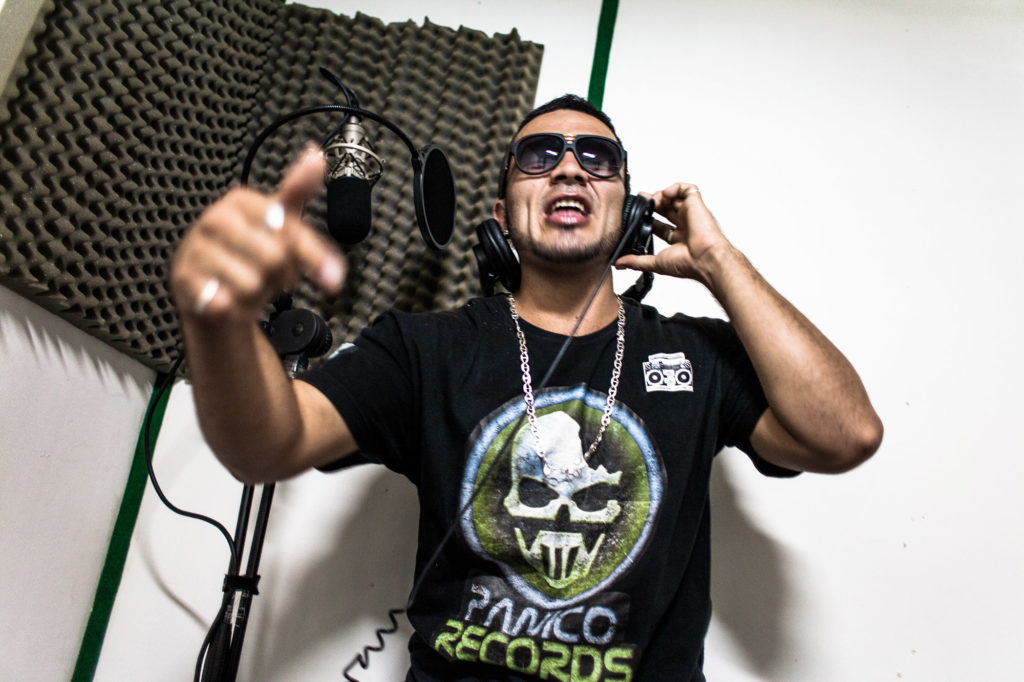 Kaiman, rapper singer during a recording for "Panico Records", an independent recording studio which collects young people coming from gangs and willing to redeem their lives from crime through music. 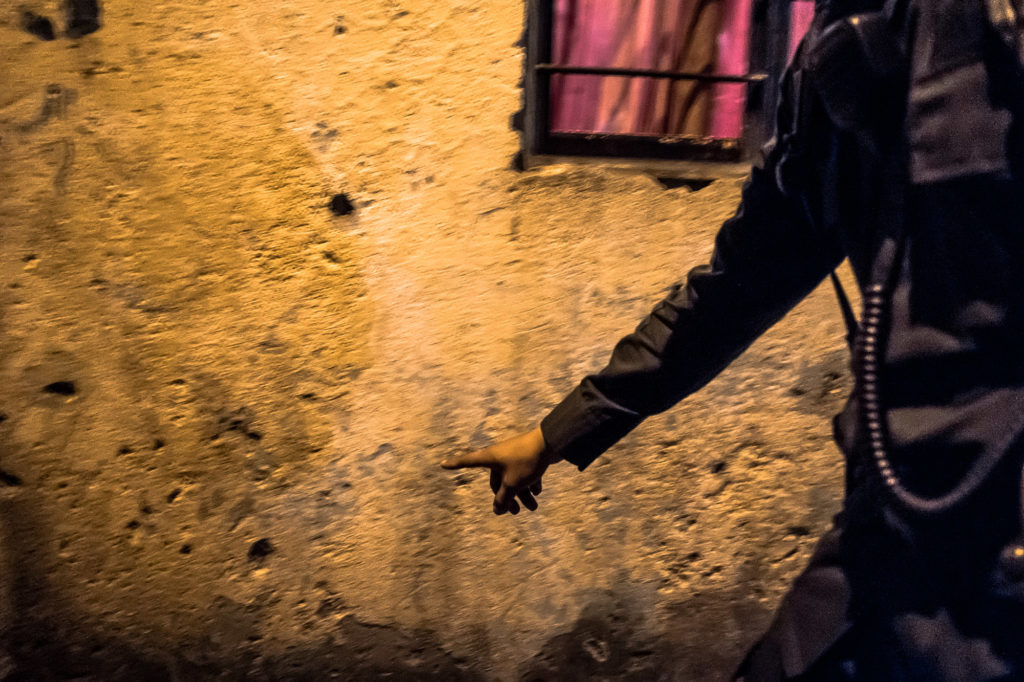 Policeman shows holes in a wall after a gunfight that took place in one of the "invisible borders" of the quarter of Aguablanca. Invisible borders are boundaries established by the local gangs within quarters, for the control of micro-traffiking. These borders affect also the daily life of civilians, who often get accidentally involved into fights among gangs. 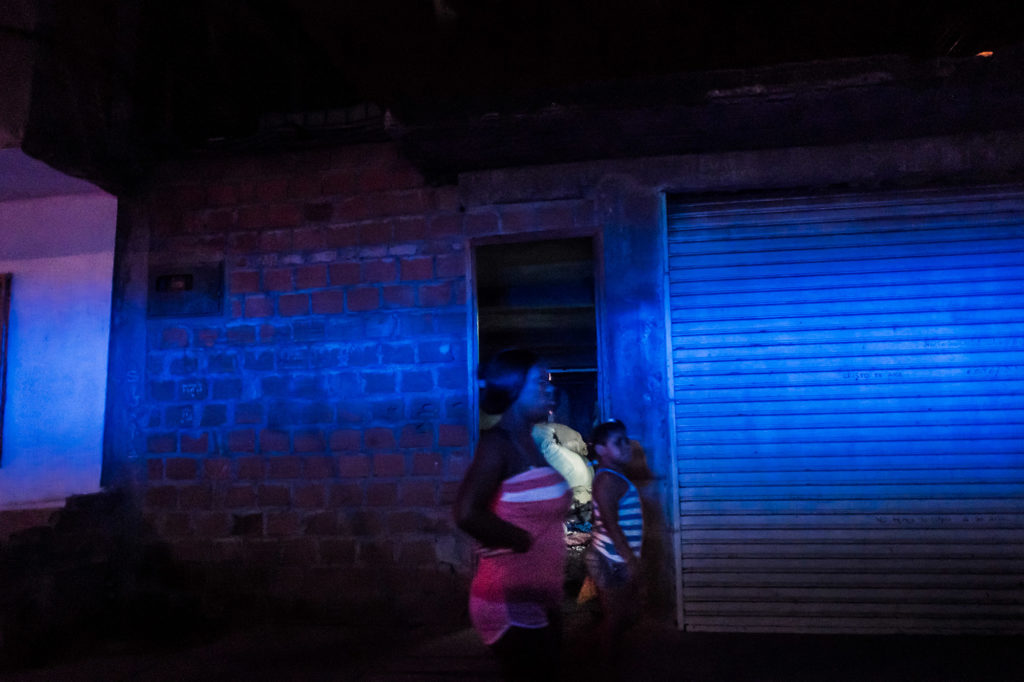 Woman with her kids walking during the night in a street of the Aguablanca quarter, illuminated by the flashing lights of a Police car during a patrol. 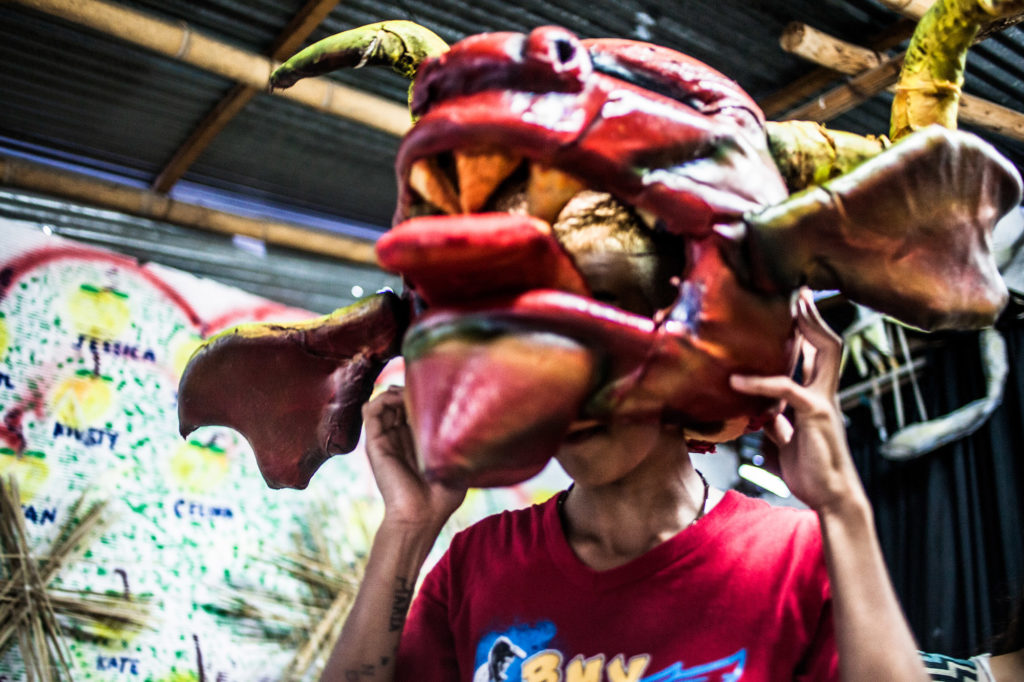 Boy wearing a mask made with paper-mache. Several associations are active in the most dangerous quarters in order to provide an option against criminality through art. 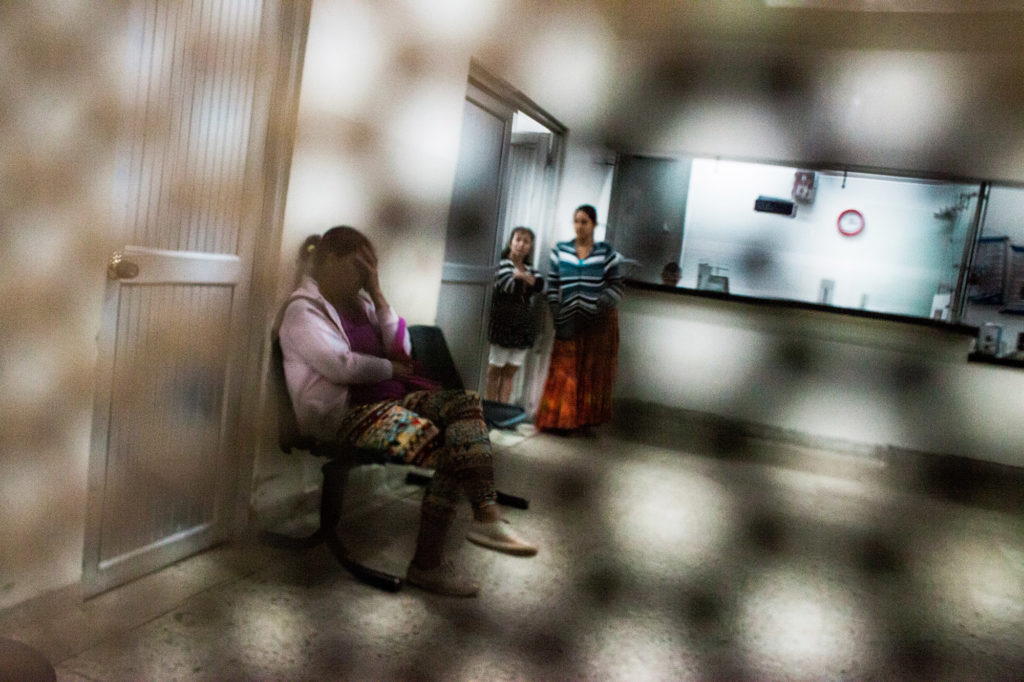 Family in despair in the Del Valle Hospital, after having lost their son in a gunfight. 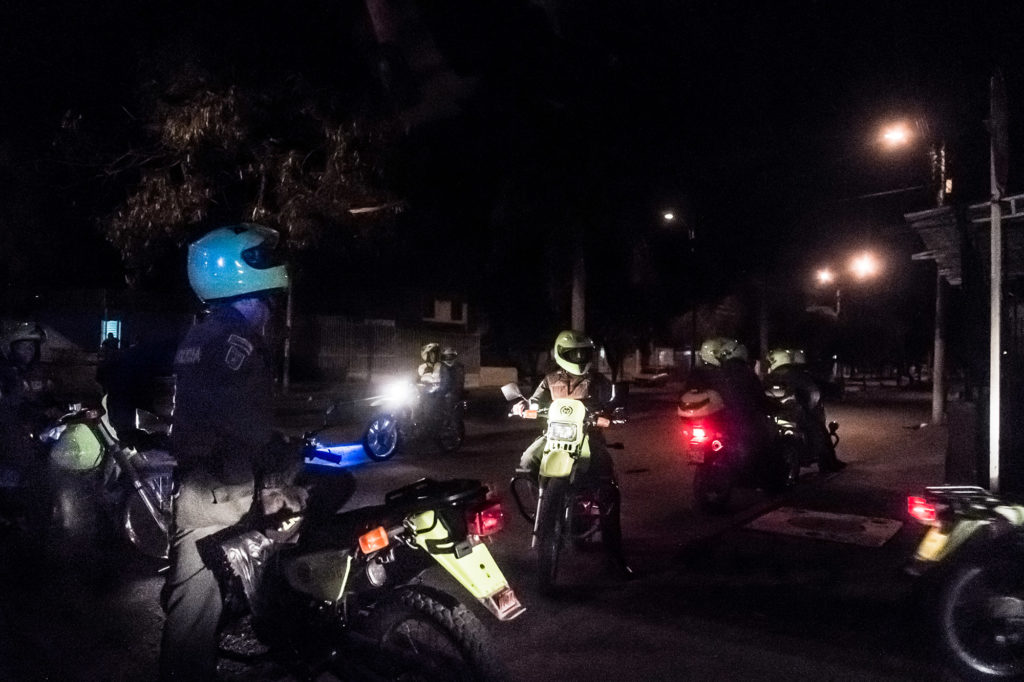 Policemen on motorbikes ready to intervene on a crime scene that had just happened in the Aguablanca neighborhood. 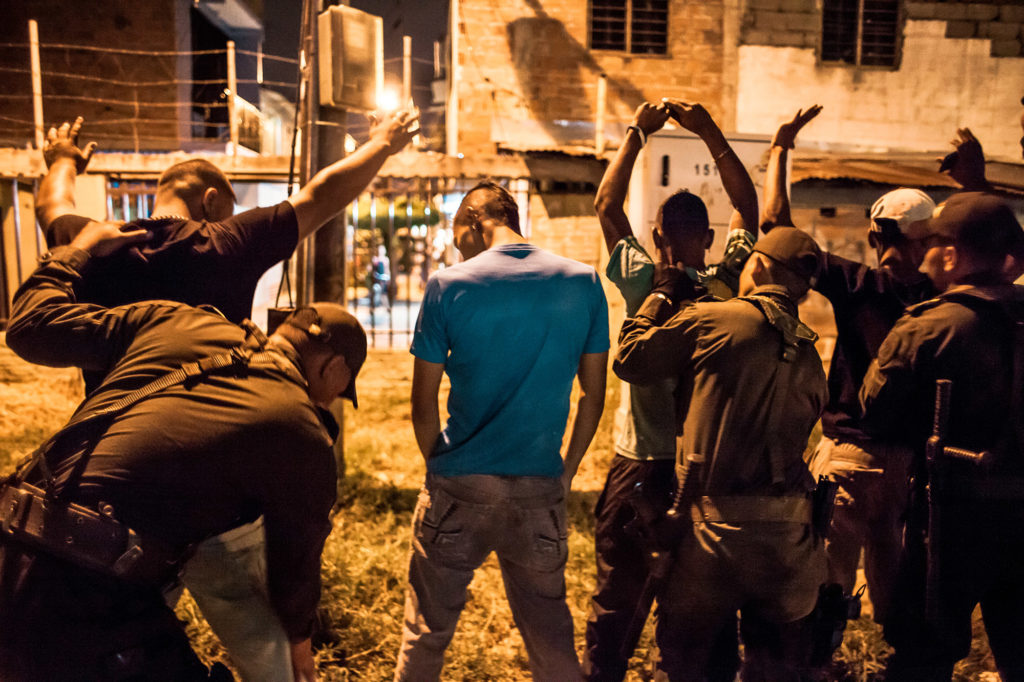 Young members of a gang during a frisk in an area of the Aguablanca quarter. The repression by Police aims to find drugs and fire-arms among gangs' members. 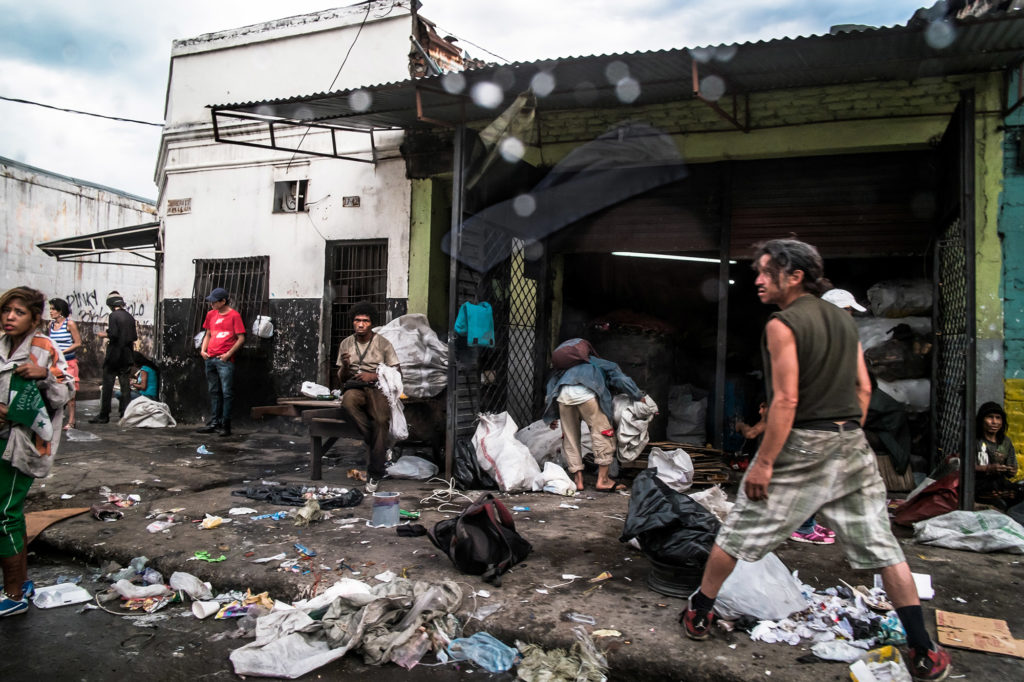 People living in the Sucre quarter, in a condition of total abandon. 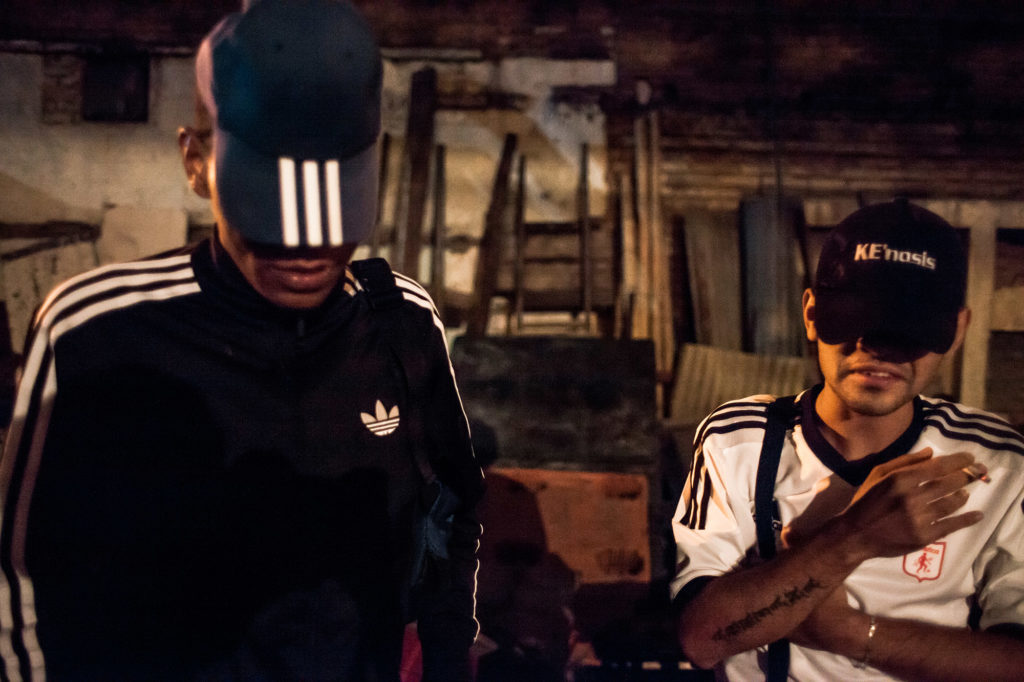 Members of a criminal gang in the Sucre area. These boys declared that they have killed several people before. 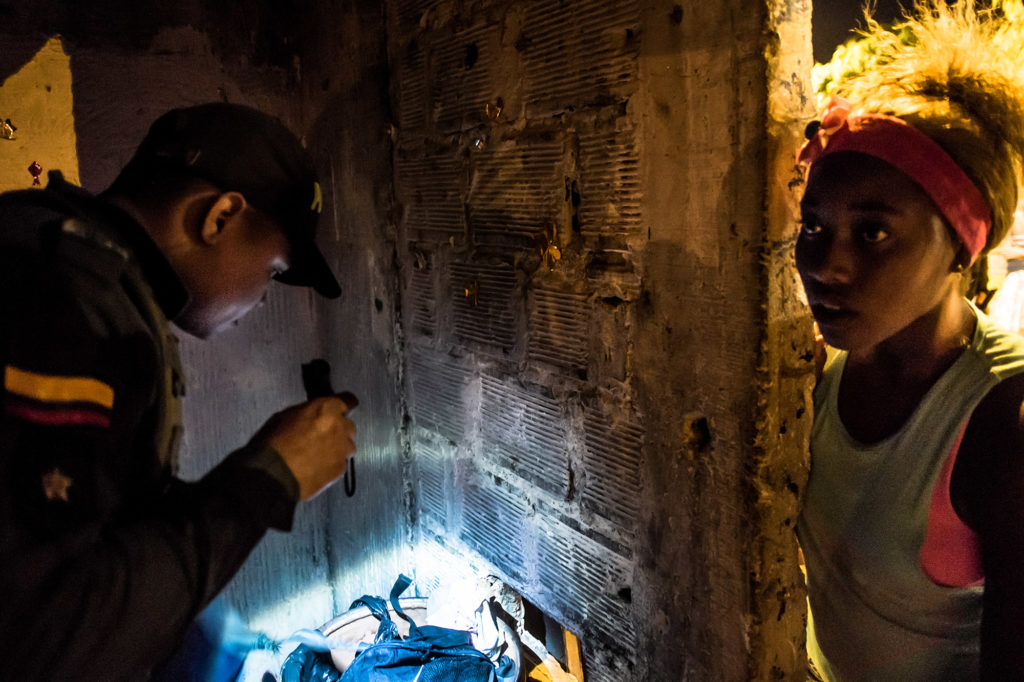 Frisk in the house of a woman suspected of collusion with gangs in the Aguablanca quarter. 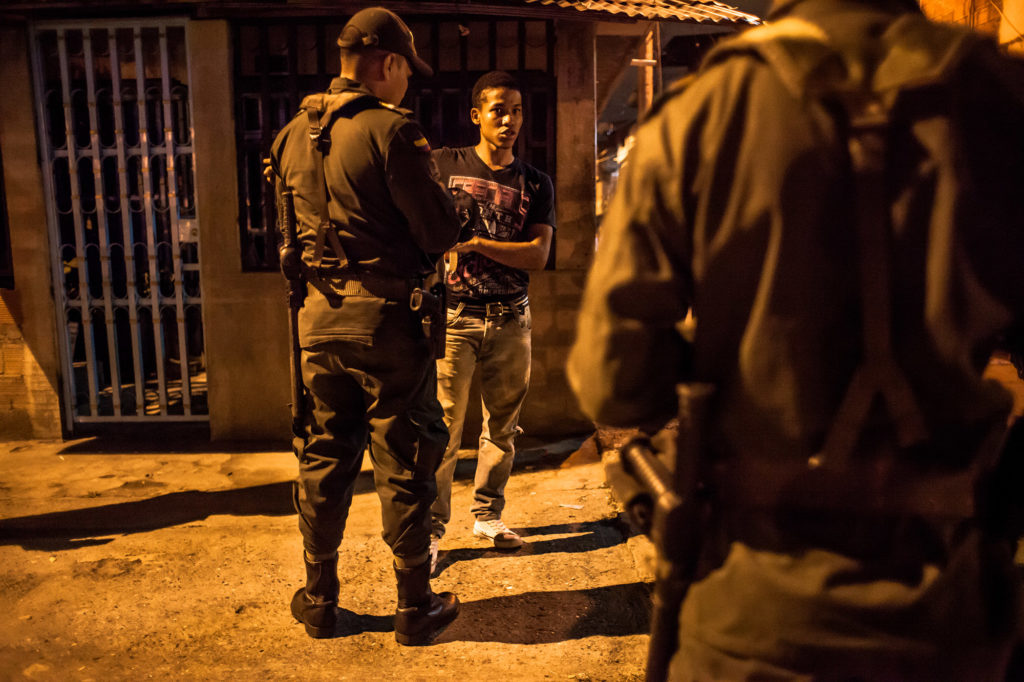 Police conducting a frisk in the Aguablanca quarter. Both gangs' members and common citizens are treated in the same way by the Police during patrols, and this often causes tensions between Police and community. 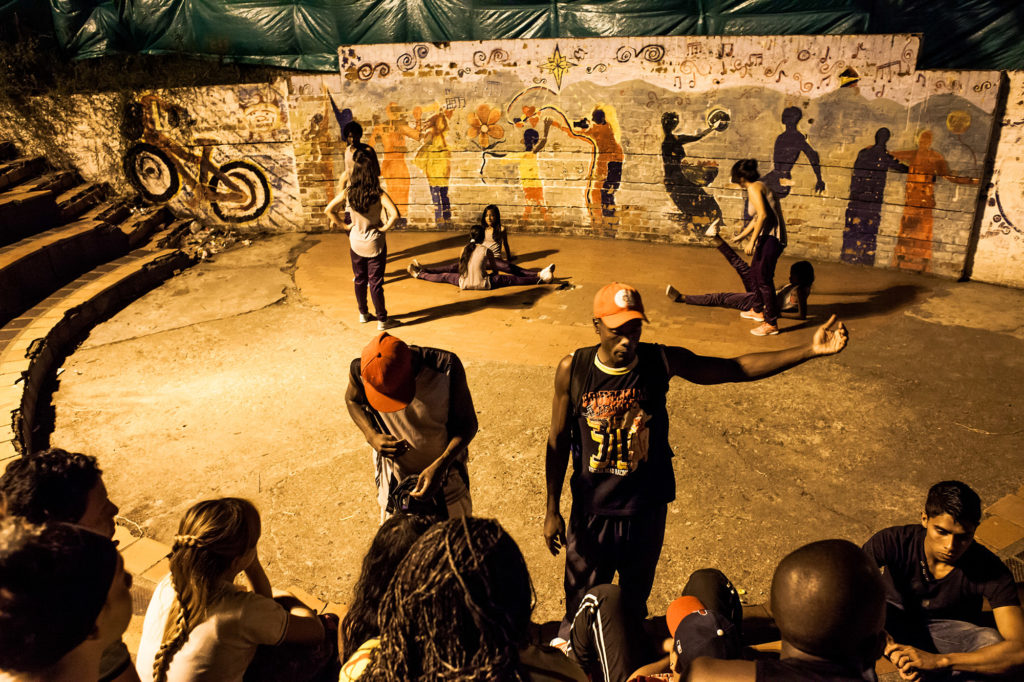 Young artists (dancers, writers, musicians, etc.) from Siloé quarter decided to gather and give birth to cultural associations, creating a shared space where young people would be able to express themselves out of criminality and violence. 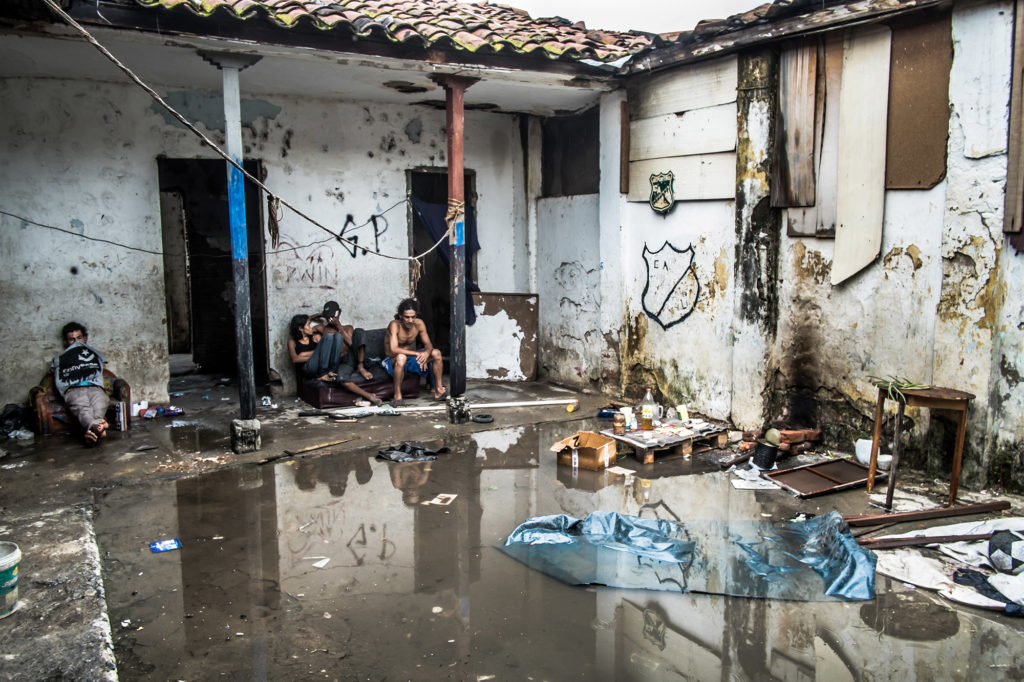 Emarginated drug-addicts living in critical conditions in the Sucre quarter. There is a governmental project for the demolition of part of the area, in order to create a park for the city. 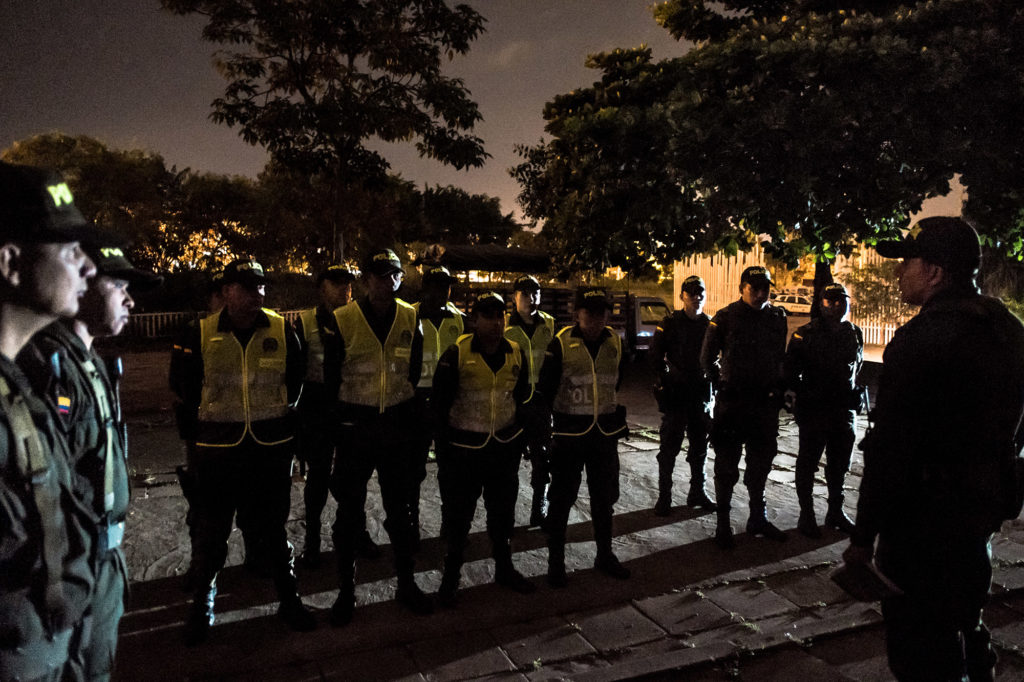 Meeting of policemen before starting a patrol in the Aguablanca quarter. The alert is always at the maximum level, due to the high rate of crime in the city.