Buenaventura is a port city situated on the Pacific coast and is known to be one of the most violent in Colombia. Through the years thousands of people were forced to flee their homes and move from one quarter to another because of the ongoing conflict between the various neo-paramilitary organizations, who act with local armed gangs.

These are the authors of the killing, dismemberment and disappearance of anyone who opposes to their interests. To carry out these acts of brutal violence, they often use chop-up houses. In March 2014, the government has militarized the city in order to protect the population, which for 80% lives below the poverty threshold and in fear of being involved in violent actions. The poorest areas are fertile ground for recruitment by armed groups and often even very young boys begin soon their “career” inside violence.

In Buenaventura the contrast between a city that grows with international trade and one of poverty and violence is clearly visible. The development plans carried out by the Government for the city, including the demolition of stilt-homes, has led to a worse condition of the daily life. Inhabitants complain about an increase in intimidation and violence, methods mostly used instead of a relocation based on the payment of people’s land. 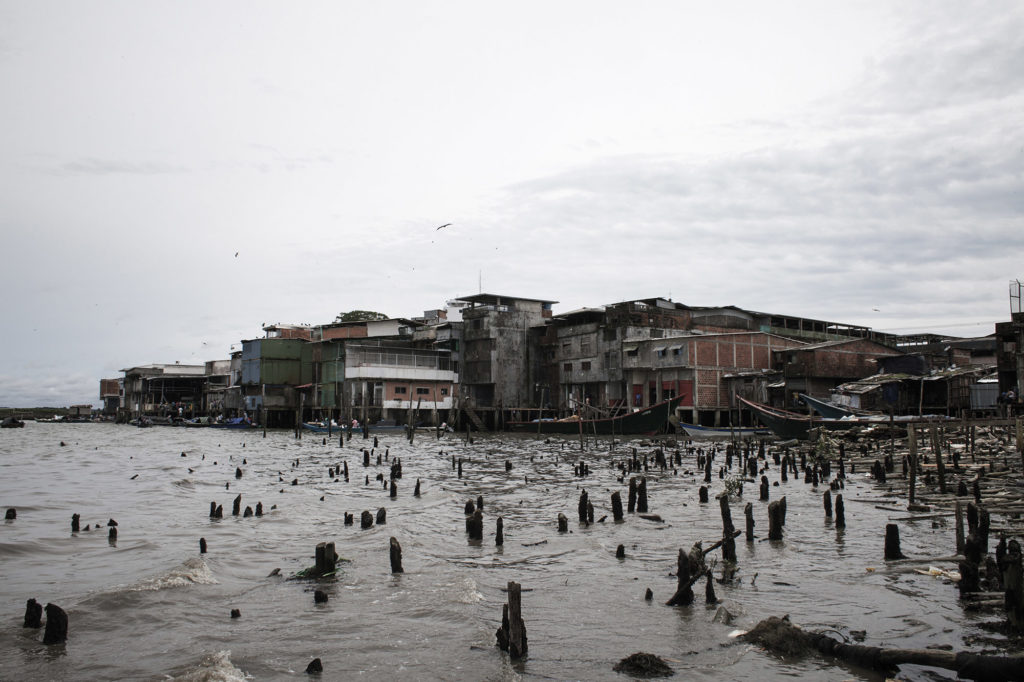 Remainings of a stilt-house quarter after a demolition. The inhabitants through time have abandoned their houses, moving to other quarters or even cities, due to the high rate of violence in the last years. 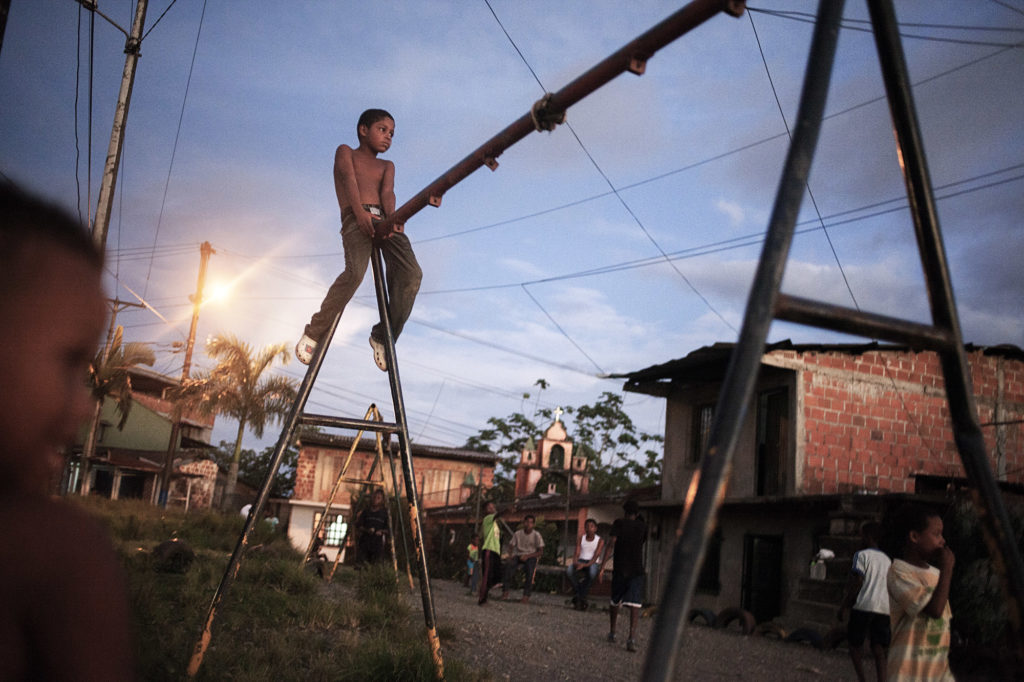 Children in a playground located in a neighborhood that has once been the scene of clashes and acts of violence. 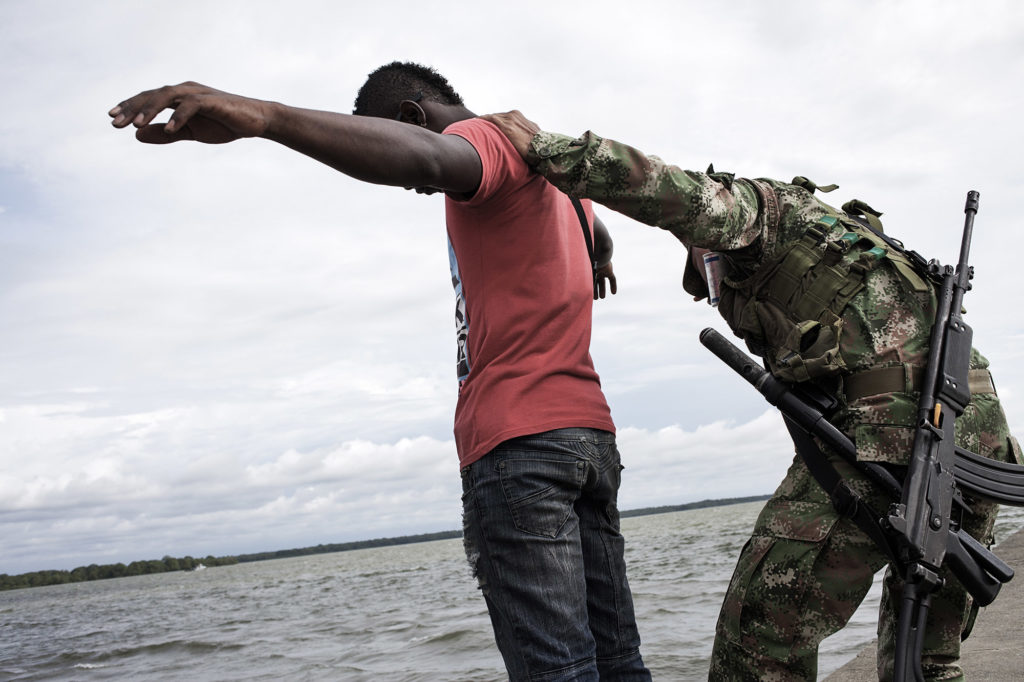 A frisk in a neighborhood controlled by the neo-paramilitary group Urabenos. The small fire-arms and bladed weapons are the main target of the blitzes and often even very young boys are subject to inspections by the soldiers. 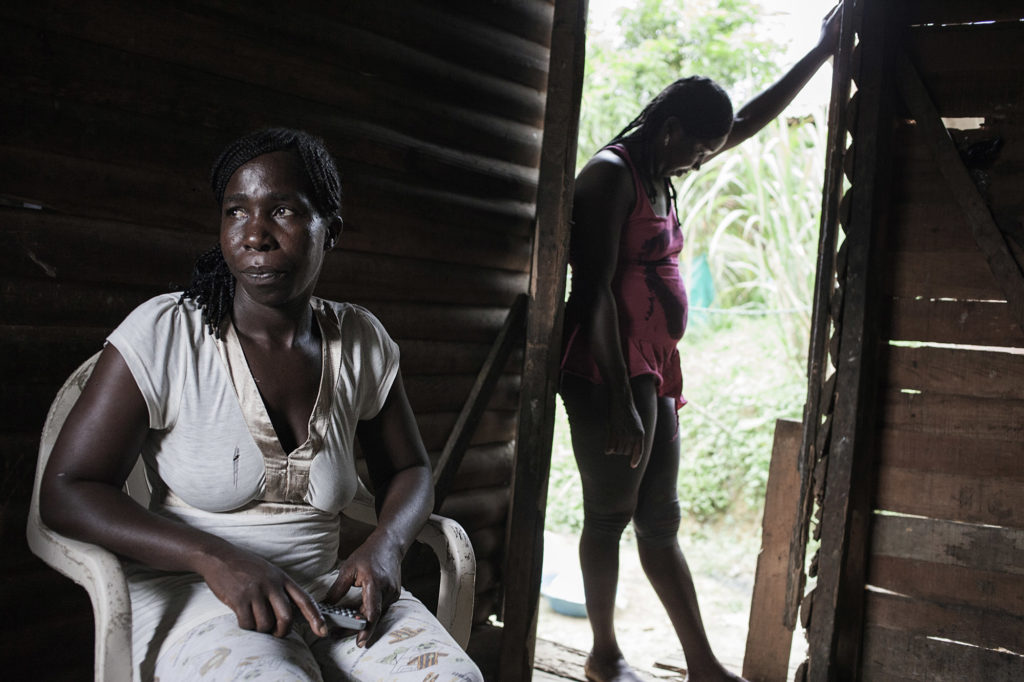 Women victims of violence. In Buenaventura there are many cases of sexual violence and they often occur in the poorest neighborhoods. The victims increased from four in 2008 to one hundred and six in 2013. From 1998 to 2011, 41.073 women have left their homes because of violences and menaces (Source: Afrovides). 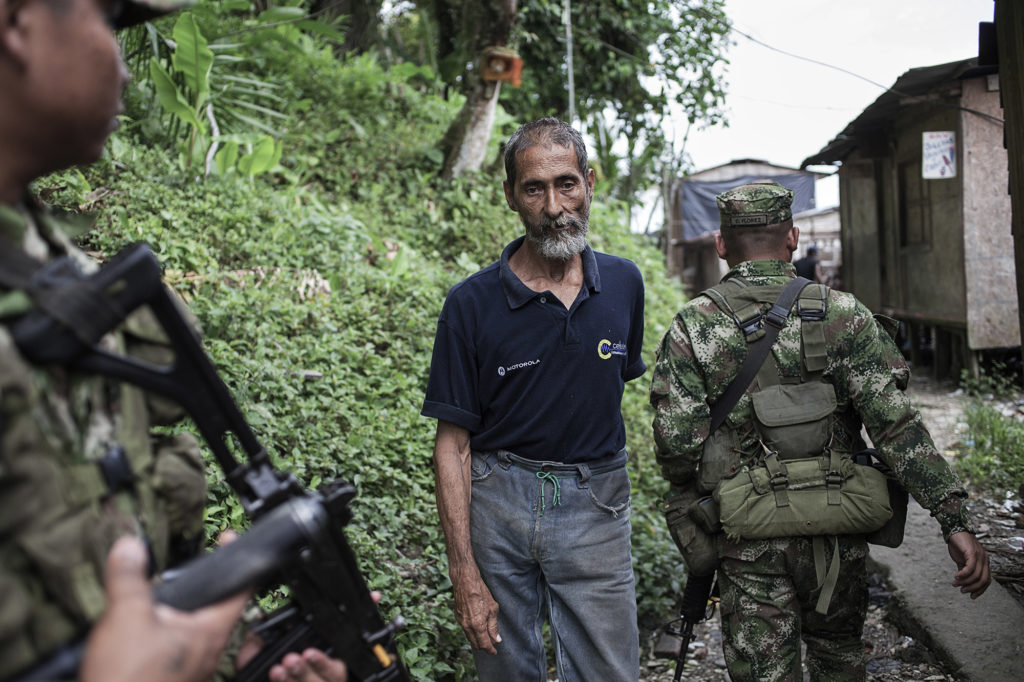 A man walking in a neighborhood controlled by the group Urabenos, during a patrol of the Colombian army. People see in the Army both a defense and some sort of threat. On one hand because of possible shoot-outs, on the other because people’s relations with soldiers may generate retaliation by armed gangs. 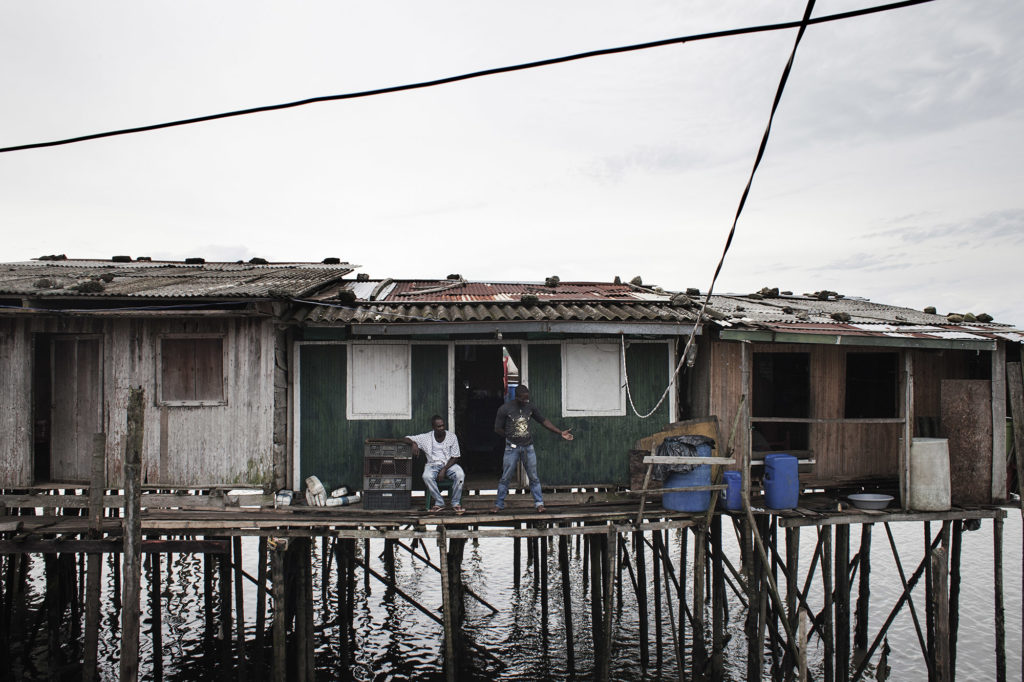 The majority of the indigent population in Buenaventura, most of which lives out of fishing, reside in stilt-houses with no running water nor electric current. 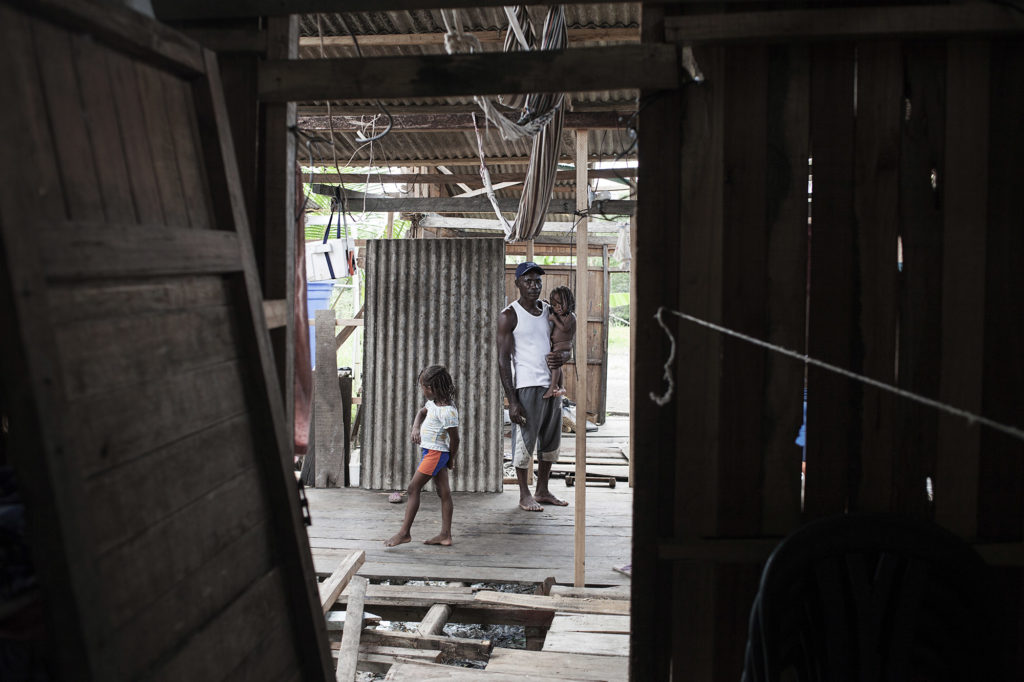 A family living in a stilt-house in hygienically critical conditions, with no privacy and disconnected from any supply (water, gas, electricity). 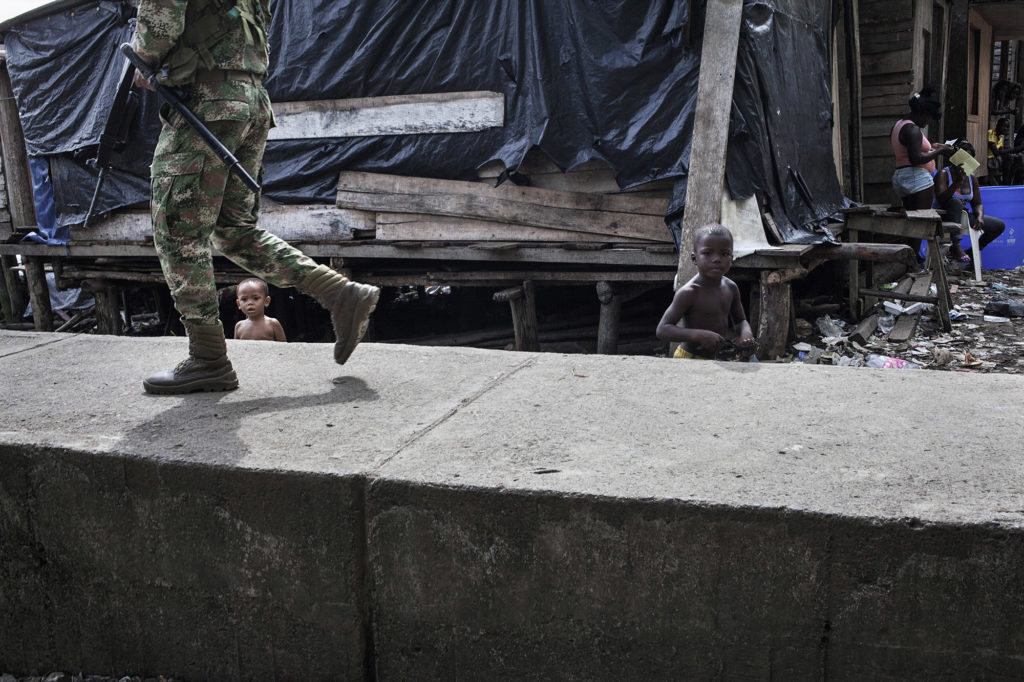 Children play in an area during a patrol of the Colombian army. The military presence is now very strong and yet people still live in fear, given the high recurrence of clashes that are often unexpected. 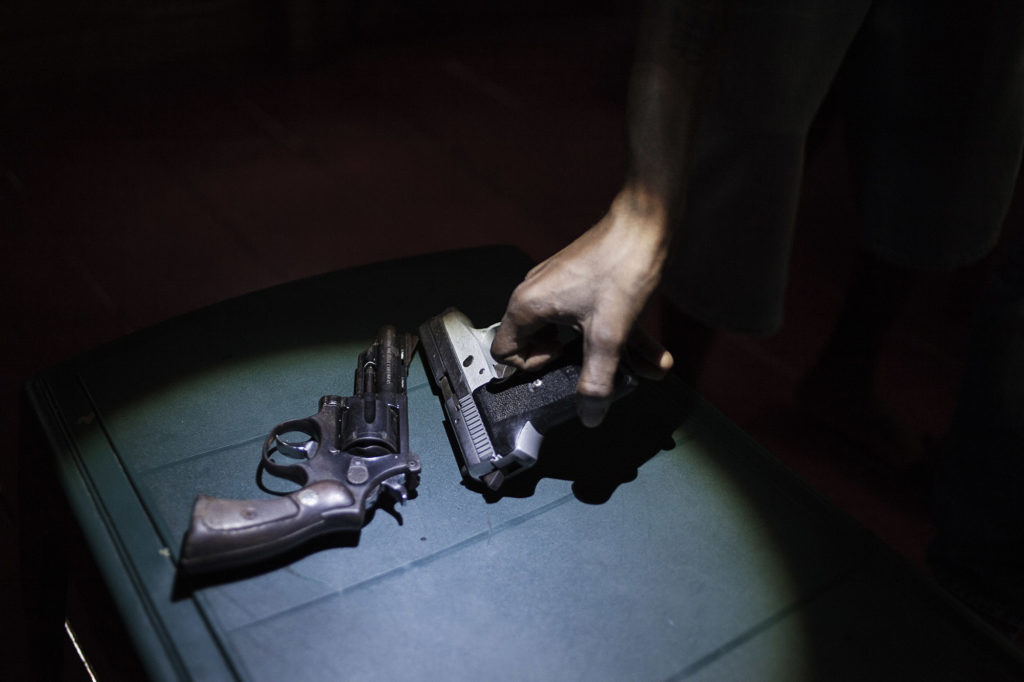 A member of a local armed gang linked to the Urabenos shows his guns inside a house. 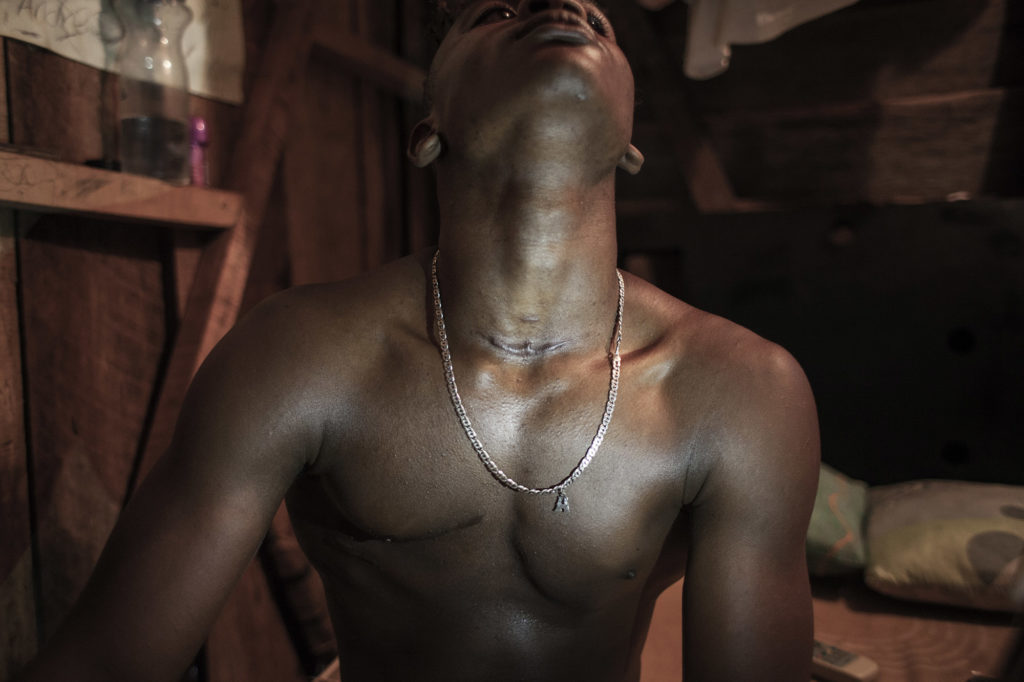 Seventeen years old boy, shot in the neck with no reason while he was quietly walking in the street. He is now paralyzed and he doesn’t get any help from the Government because he is not recognized as a victim. 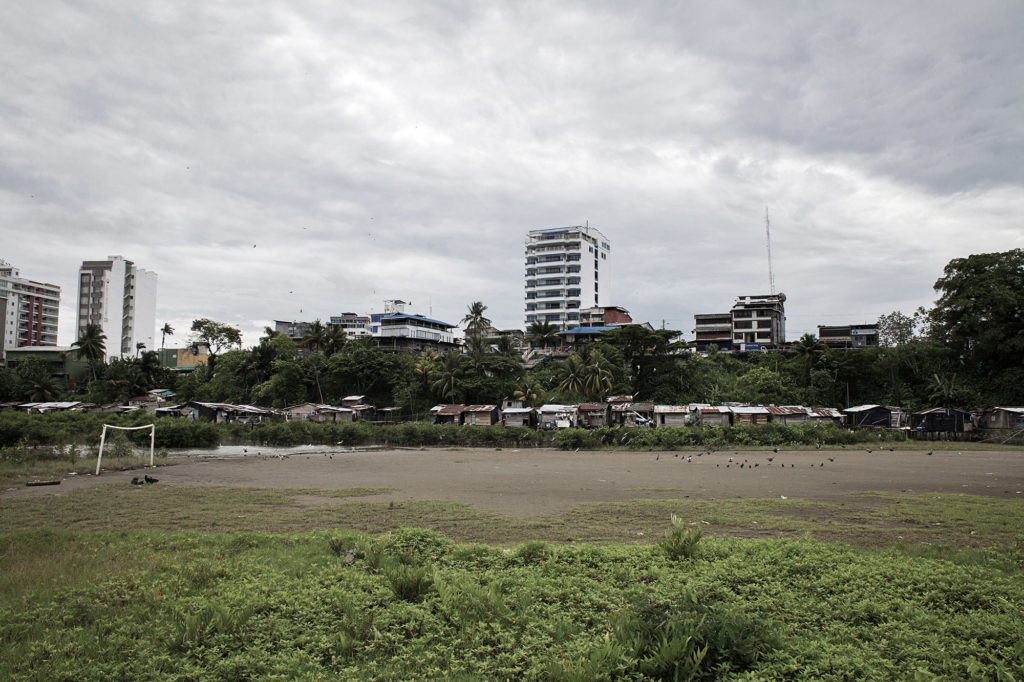 The contrast between the “two Colombias”: the country of a sophisticated elite, growing rich off international trade on one hand, and a country of crushing poverty and violence on the other. In 2015, in this field the Police investigation section has led several operations searching for mass graves. 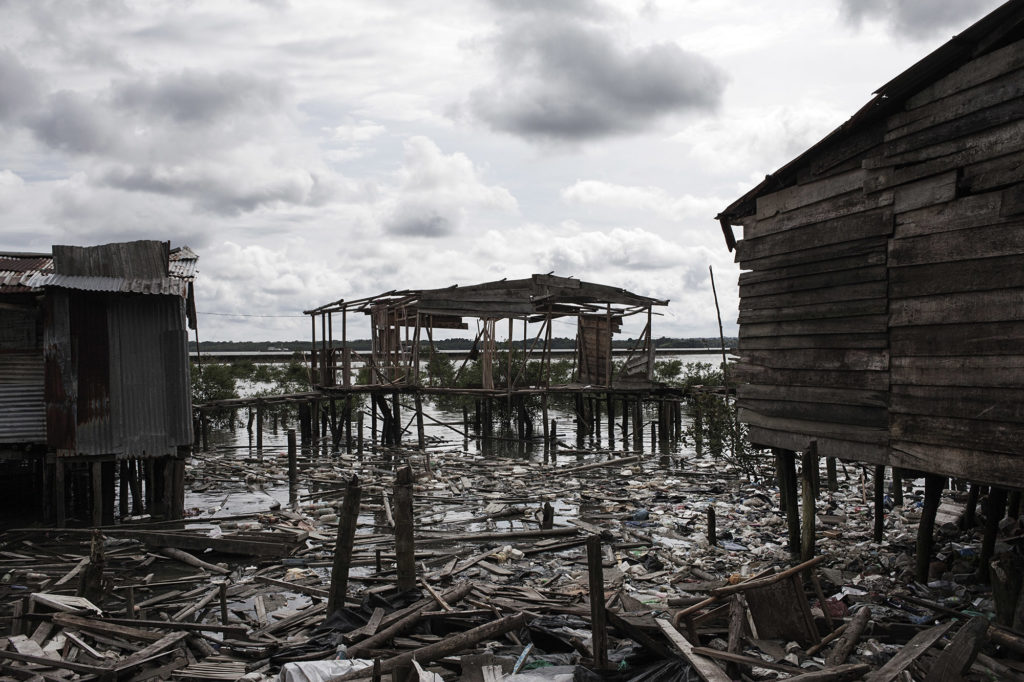 The last of the Casas de Pique (=chop-up houses) found and destroyed by the Colombian Army: after this discovery, the Government has deployed additional soldiers in the city. 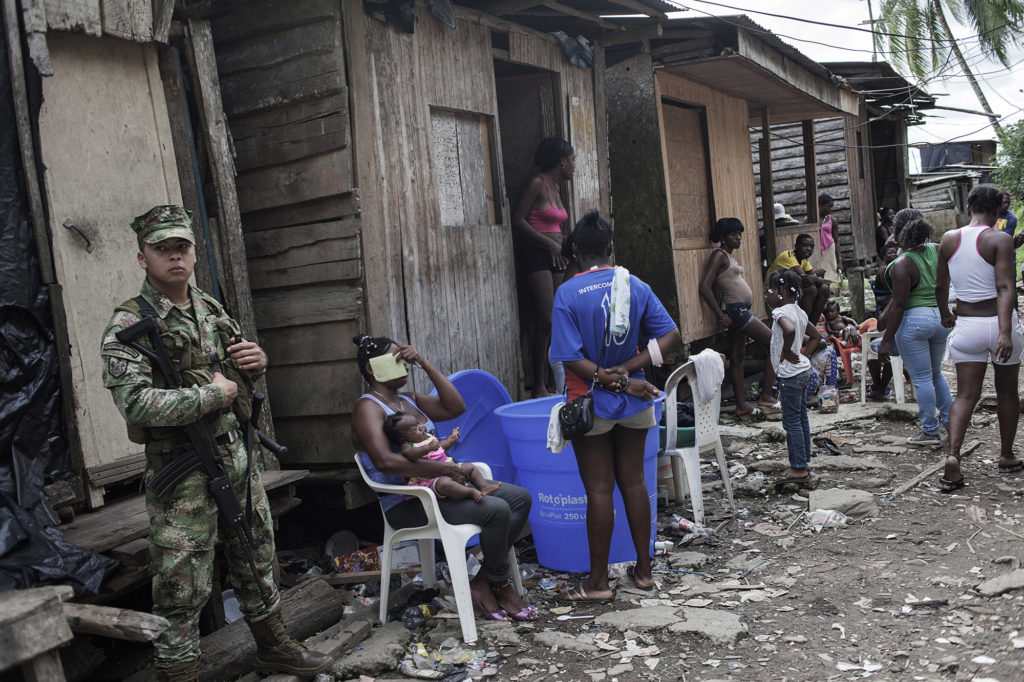 Soldiers are placed along the streets in every quarter, close to the houses where people live. 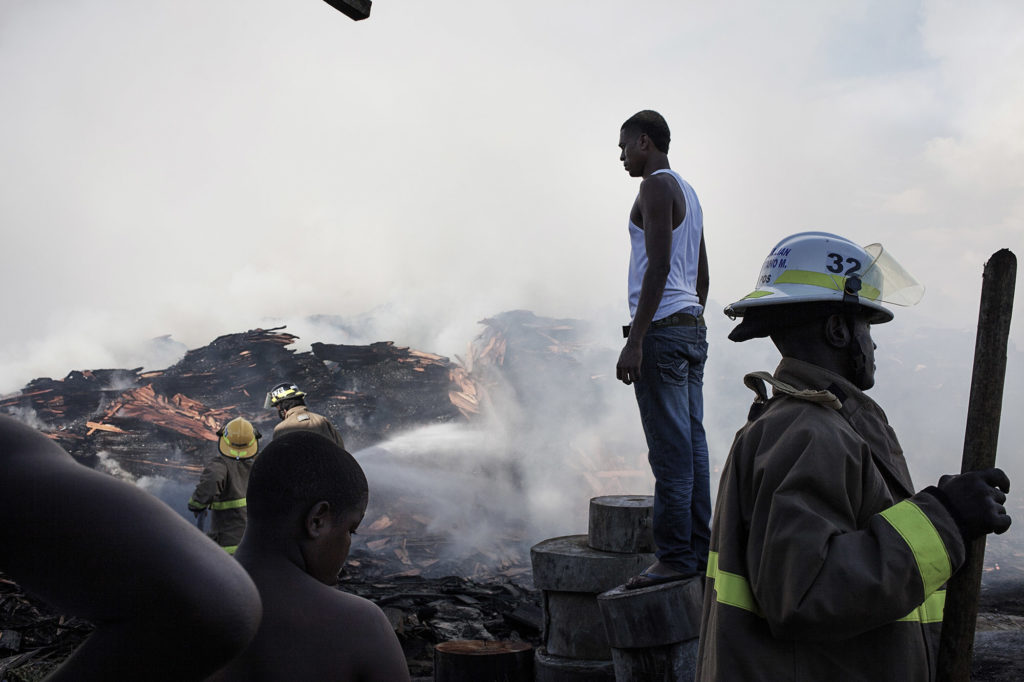 The inhabitants of a neighborhood look at the arson of a sawmill. Entire quarters have been burnt down, especially in the area of the new port, currently under construction.

Boat for both trade and people transportation headed to the city of Jurado. Buenaventura is the main port for this kind of boats and it is of strategic importance for all destinations along the Pacific coast. 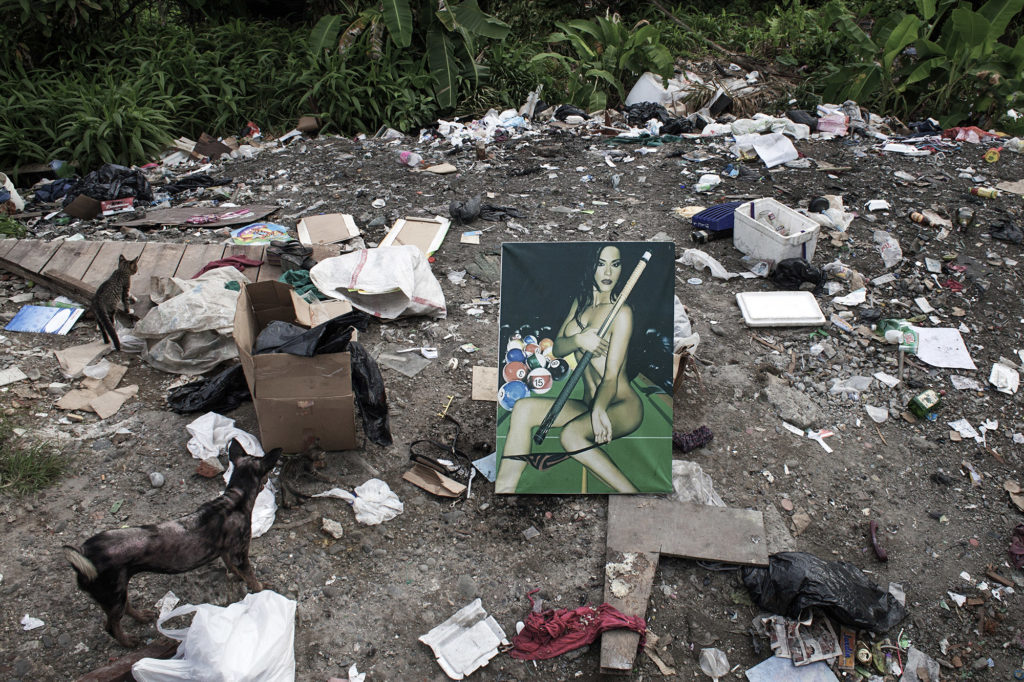 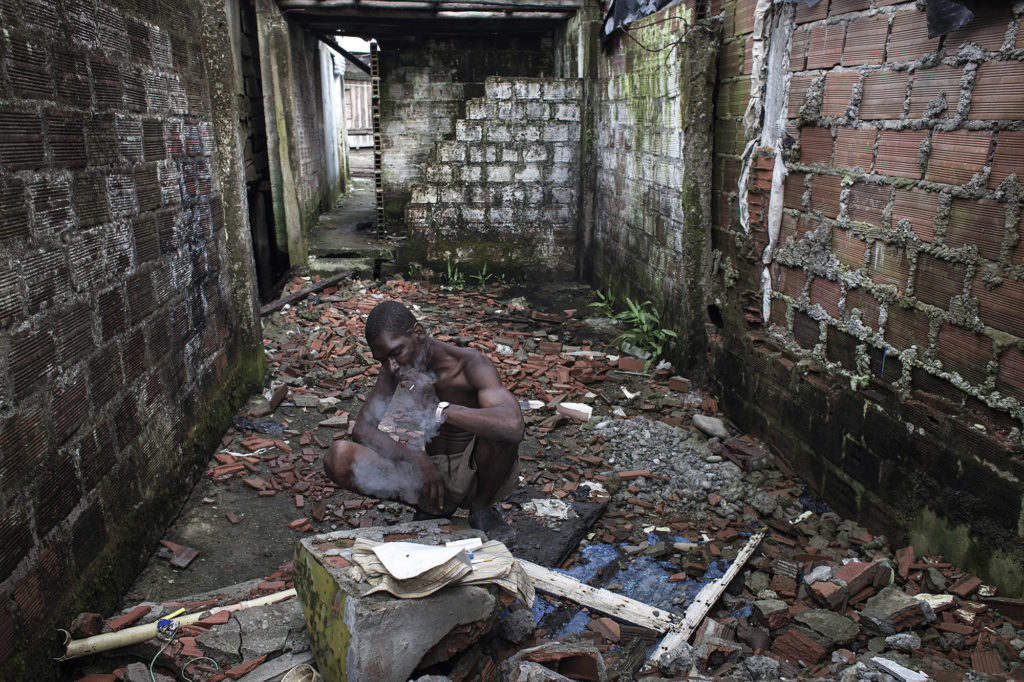 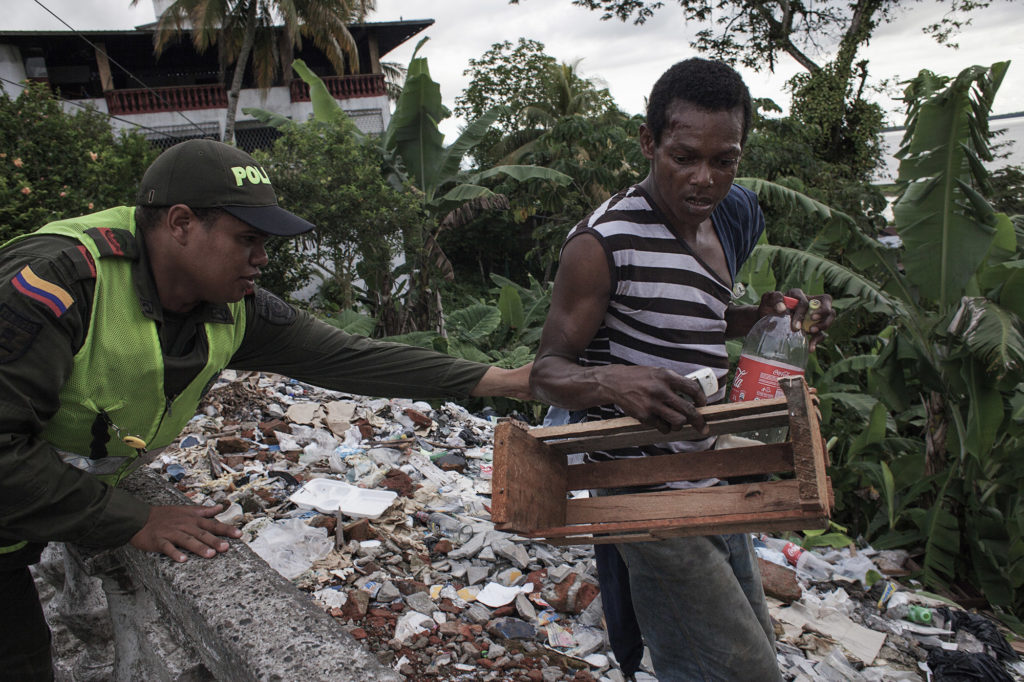 A Policeman, during a bust in an area frequented by drug-addicts, grabs an addict wandering in the street under the effect of “basuco”, a drug similar to crack. 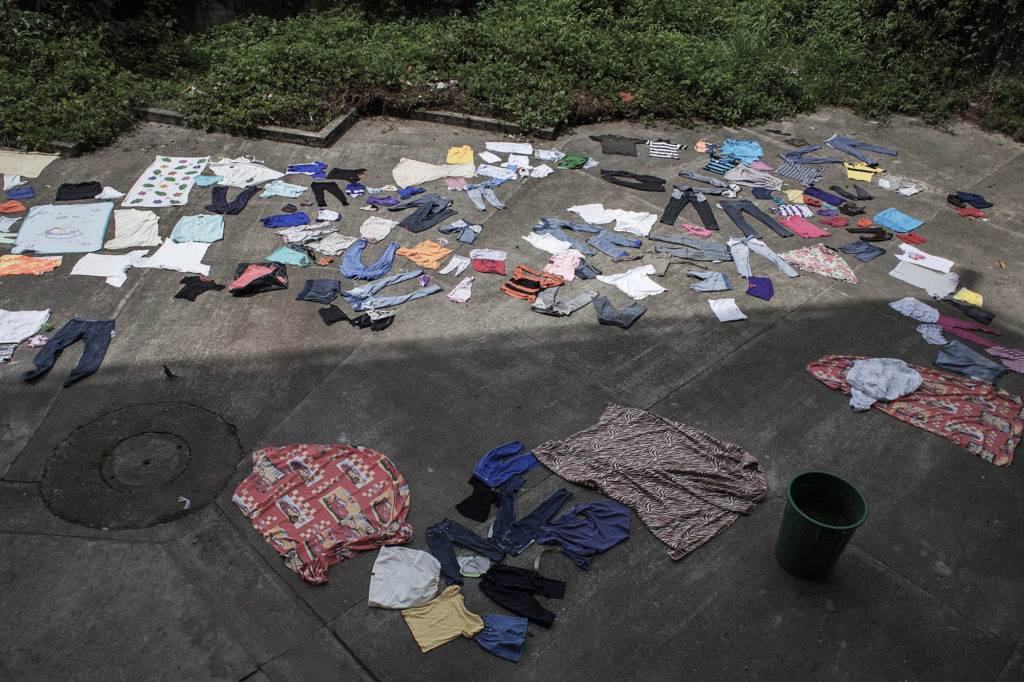 Clothes spread out to dry. The “Coliseo Crystal” arena houses 274 families for a total of 591 people. The average quantity per day for each family amounts to a liter of non-drinkable water, which causes many health problems. 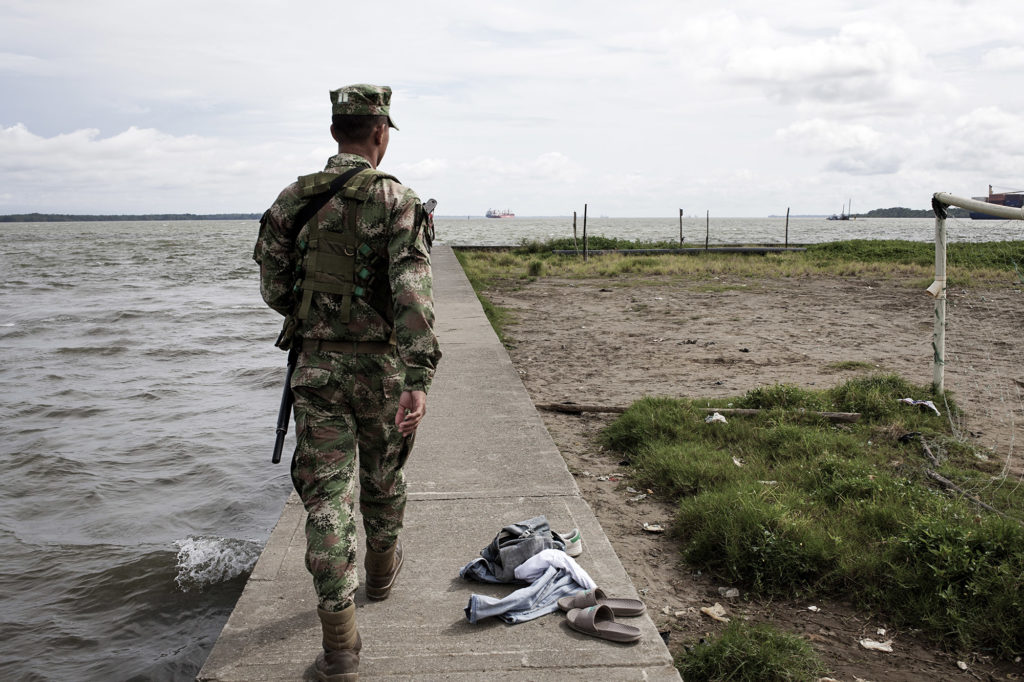 A soldier walks through one of the quarters controlled by Urabenos. Even moving between a quarter and the other is dangerous because of the so-called “invisible boundaries” that define the areas of control of the different factions of the armed conflict.