Evros river, the oriental gate of Europe. A wall against the immigration

Evros river is the 160 km natural borderline between Greece and Turkey, Europe and Asia and since 2007 one of the preferential ways for the immigration to Europe. Riverside had been planned the construction of a ditch and the first 15 kilometres were ready in August 2011.The initial project, later considered to be too expensive, was then changed into a double barrier of wirenetting and barbed wire. From September 2011 the European Union has continuously showed its approval of the project. On 13th April 2012 the Greek Government, after discussing at the end of March the con- struction of new detention centres on the outskirts of the borderland, approved the starting of the works to realize the fencing with a cost evaluated to be over 3.000.000 Euros to be totally paid by the Hellenic state, already burdened by the heavy economical crisis.
In 2011 Frontex, a military force created and supported by the European Union, started the “Poseidon Project” to control and stop the migratory flow. According to data provided by Frontex, in 2012 about 55.000 people coming from Asia, Middle East and Africa tried to take refuge in Europe.
According to data provided by Eulex, 250 people per day try to enter into Greece to find a normal life with the help of men dealers, which the migrants call “ the agents”. During the day on the road from Kastanies to Alexandropoli you can meet groups of four or five people walking fast: they are migrants who have crossed the Evros river hoping to survive and to go to Athena as their first aim. Some of them will rest in the Greek capital, which has a very large community made of migrants, others will try to reach other countries in Europe with the help of their “ agents”. 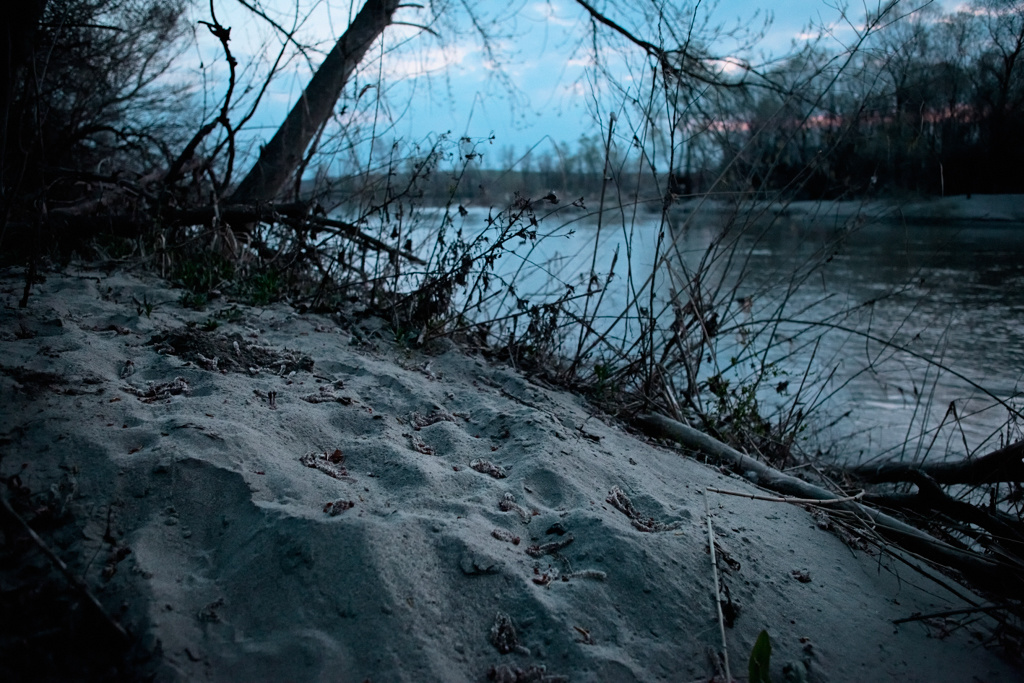 Prangio – The Treaty of Lausanne, 1922, provided the Evros river to become the borderline between Greece and Turkey. The tension between the two countries is very high, especially after the approval of the project of the creation of the fencing, which marks not only a political, but also an ideological barrier. 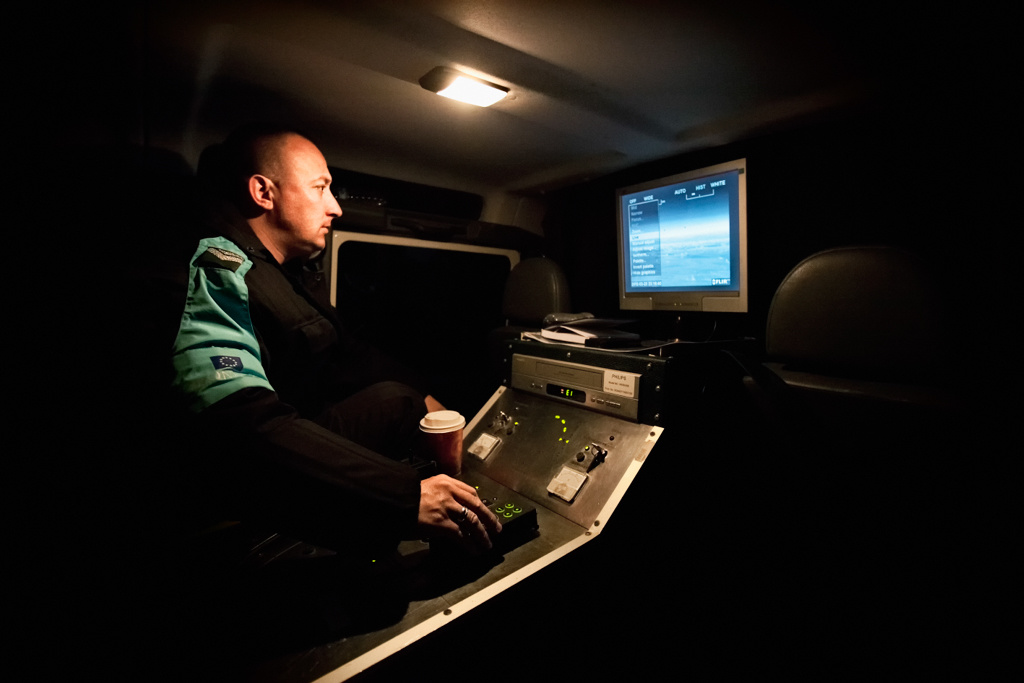 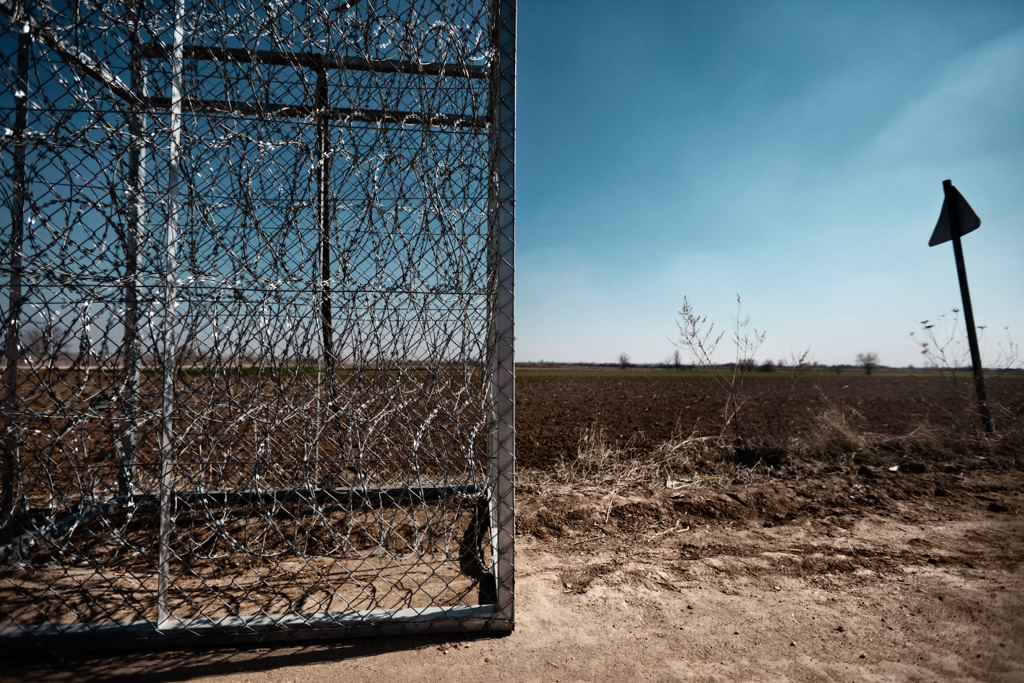 Kastanies – After the approval of the project of the fencing in December 2011, which had the further confirmation by the Minister of the Public Order Mr. Christos Papoutsis, on 17th April the Minister for the “citizens protection”, Michalis Chrisochoid- is, started the works of fencing in the region of Kastanies, few kilometres from the Turkish border off Edirne. The fencing will be ready within Sep- tember 2012 and will cost to the Hellenic state over 3.1000.000 Euros. 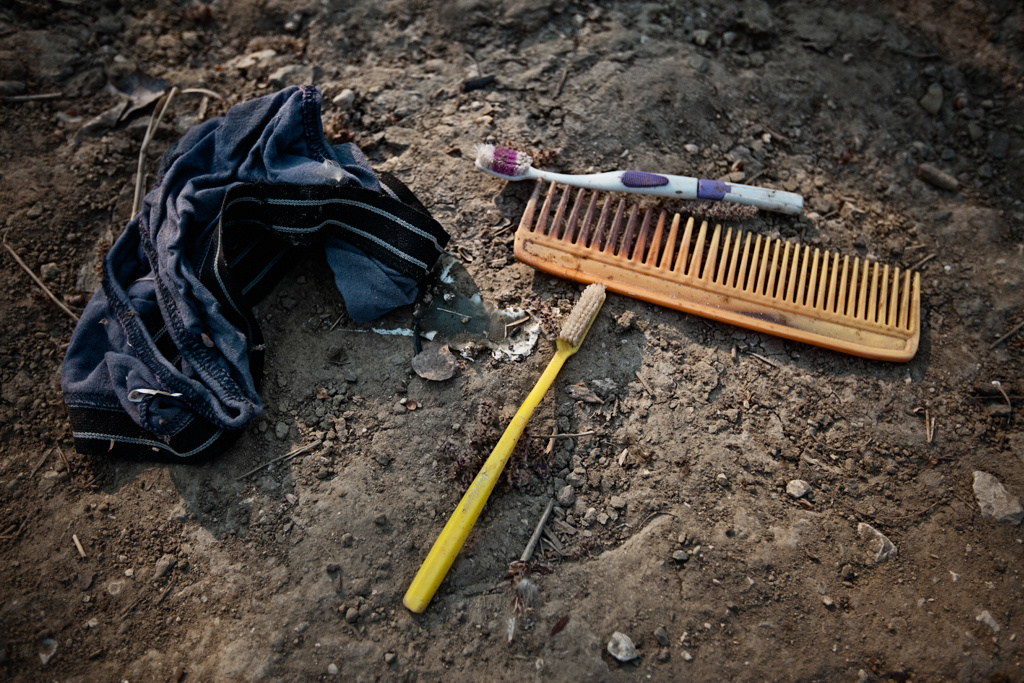 Pithio – Every day hundreds of migrants cross the Evros river. After they arrive at the Greek coast, in Europe, they leave their personal objects and wet dresses along the streets of the fields which separate the Evros river from the main street. 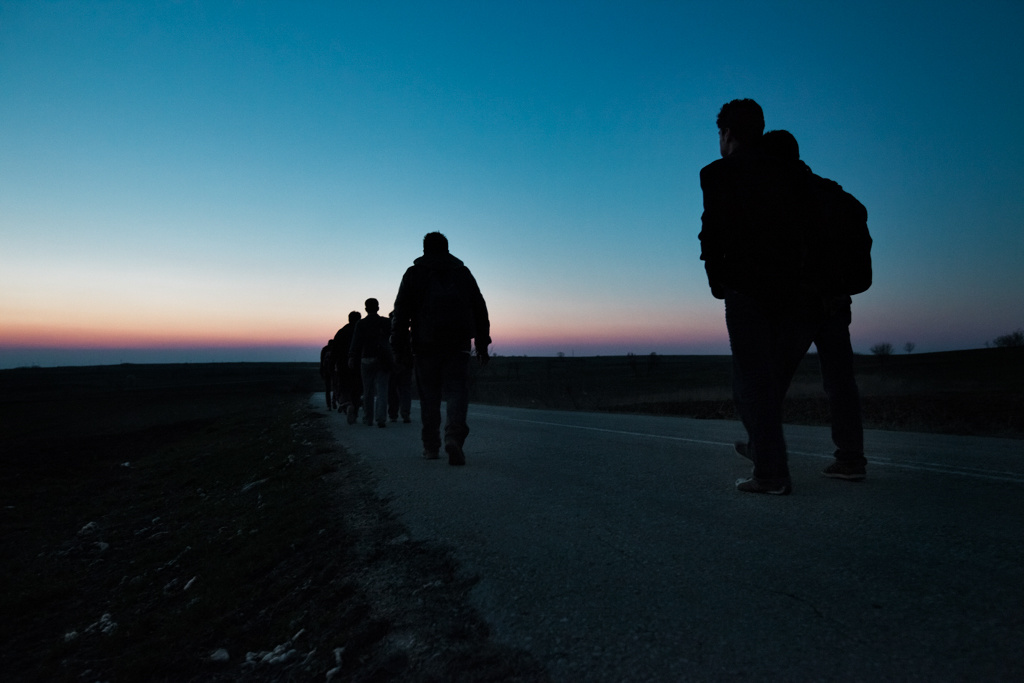 Prangio – On the road connecting Orestiada to Alexandropli you can see groups of migrants who have just crossed the river. One changes his clothes, one is cold, one is tired, one is hungr y, ever ybody has risked his life. Every day the people living in this region can see groups of puzzled migrants going towards Athena. 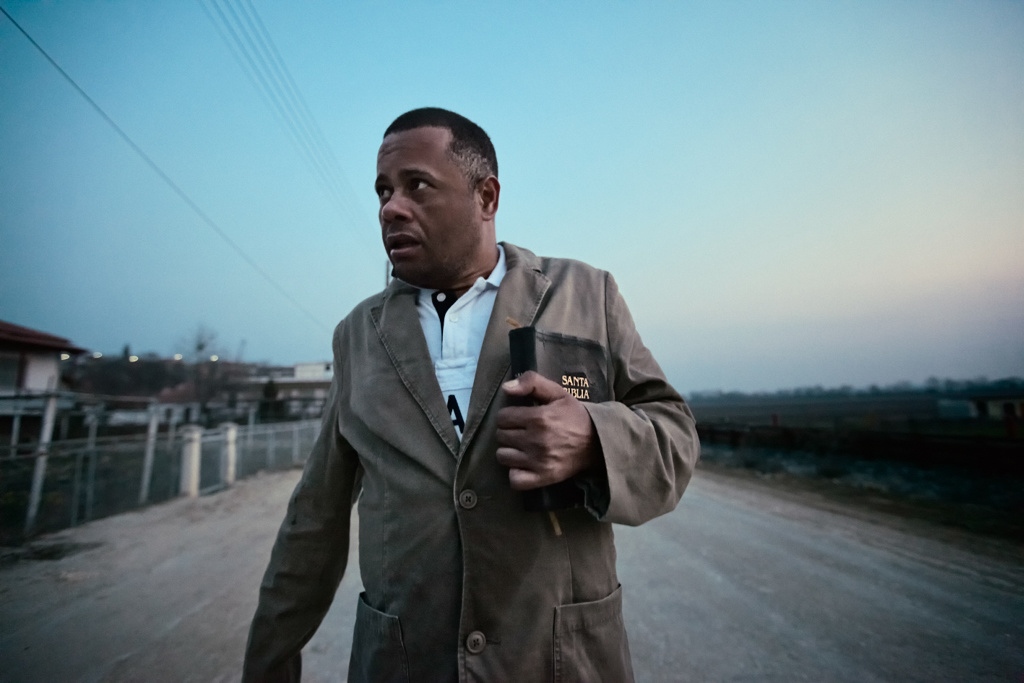 Petrades – Through the Evros river migrants from Asia, Middle East, Africa and South Africa enter into Europe. Some of them go from the Domini- can Republic to Somalia and then from Somalia to Turkey till Europe. They are exhausted after days of walking and are confident that their faith will support and protect them during the way. 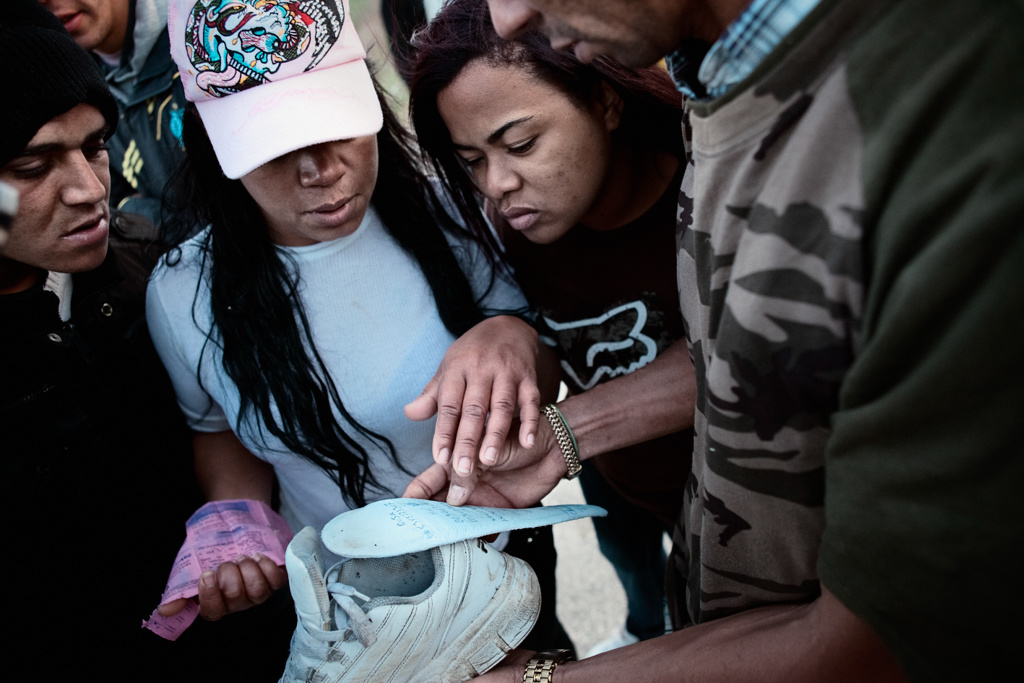 Petrades – A group of Dominican migrants check the contacts of their “agents”. The net of “agents”, or dealers, organizes the trip from the Dominican Republic to Somalia and from Somalia to Turkey and then from Turkey on foot to Europe. The cost to arrive in Europe from the Central America is of about 2000 USD. 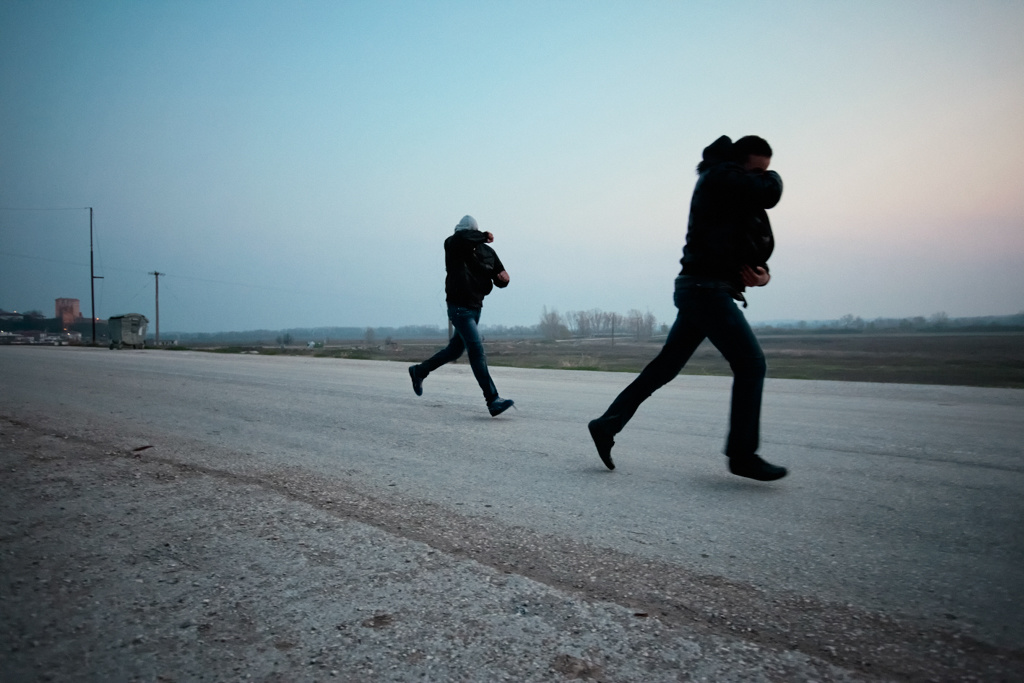 Pithio – Many people from North Africa decide to arrive in Europe passing through Turkey, due to the reinforcement of the controls in the Mediterranean Sea after the Arab spring and the conflict in Leba- non. A group of Algerians is running with their faces covered not to be identified. 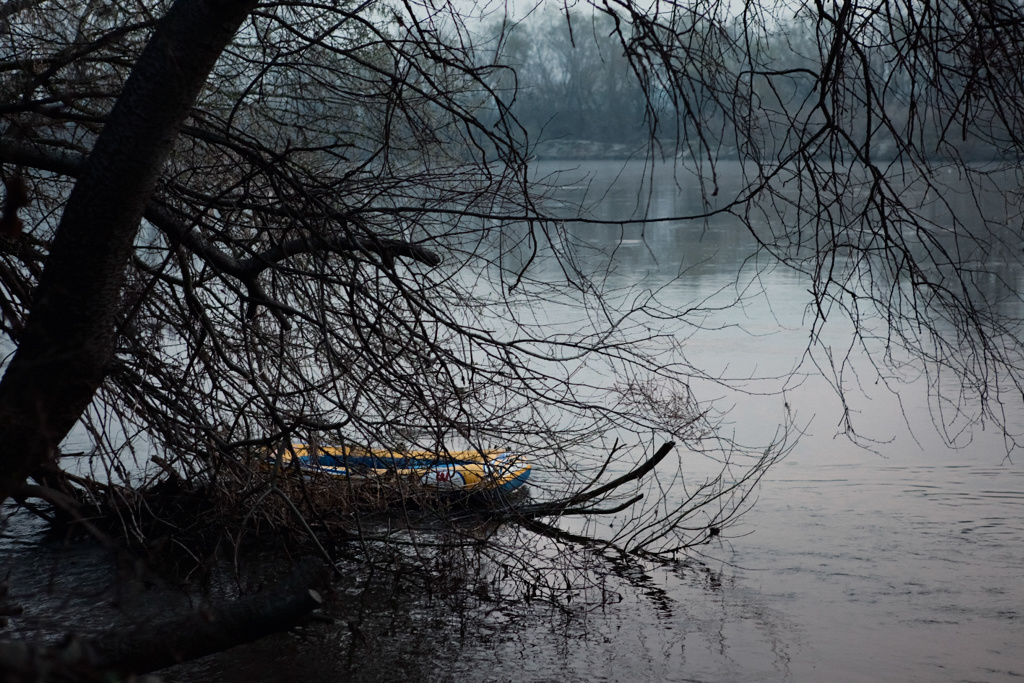 Pithio –The Evros river is an obliged passage to enter into Europe from Turkey. It has become an increasingly trodden course for the migrants who rely on the men dealers for their trip and who are often beaten and forced to use small boats or similar kind of makeshift boats to cross the river. 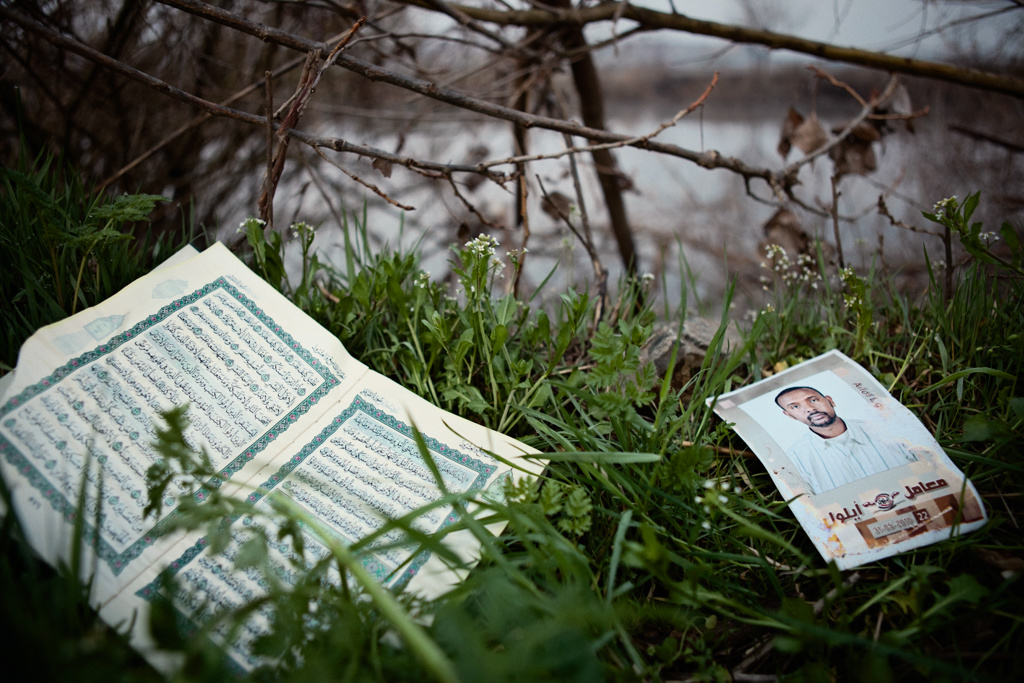 Pithio – The Turkish villages are near to the bor- der. At prayer time the muezzins’ voices reach the plain which separates the river from the road to Alexandropoli. On the road remain the damp pages of the left or forgotten Koran. 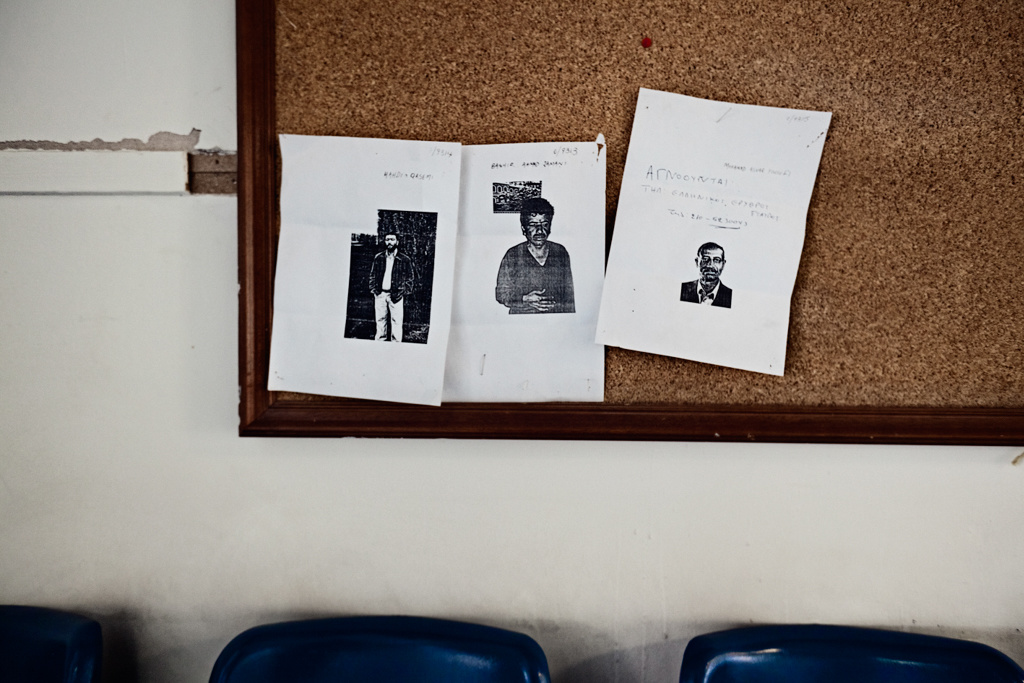 Dydimoteicho – At the hospital entrance you can find a notice board with the photos of missing peo- ple or people dead while crossing the river. Ill or wounded migrants go often to the hospital; the first aid station is forced to inform the police of the arrival of these migrants, who are then booked and guarded over by the police while they are in hospital.

Sidirò – 30 km off the road which skirts the Evros river you can find the only Muslim cemetery of that region. In the cemetery there are the dead Muslim migrants, or at least supposed to be Muslim, who were found dead on the river surface or in the fields after crossing the river. From the beginning of 2012 6 people were found drowned or dead by cold attempting to cross the river. 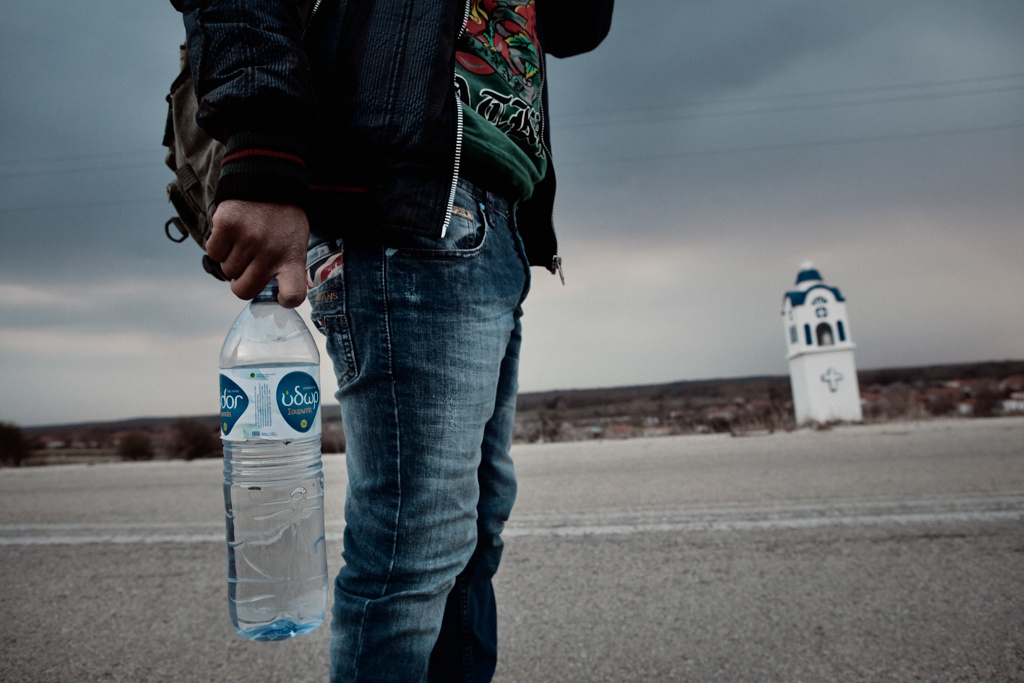 Prangio – Johan, 26, Syrian Kurdish, lived in Afrin, near to Aleppo. Johan got a degree in economics at Homs. He left Syria one week ago, when he was recalled to serve the army of Assad. He is going to Athena to seek refuge even if, after the bilateral pacts between Greece and Turkey, Syrians, Armenians, Georgians and Iraqis run the risk of being deported to Turkey and from Turkey to their native countries. 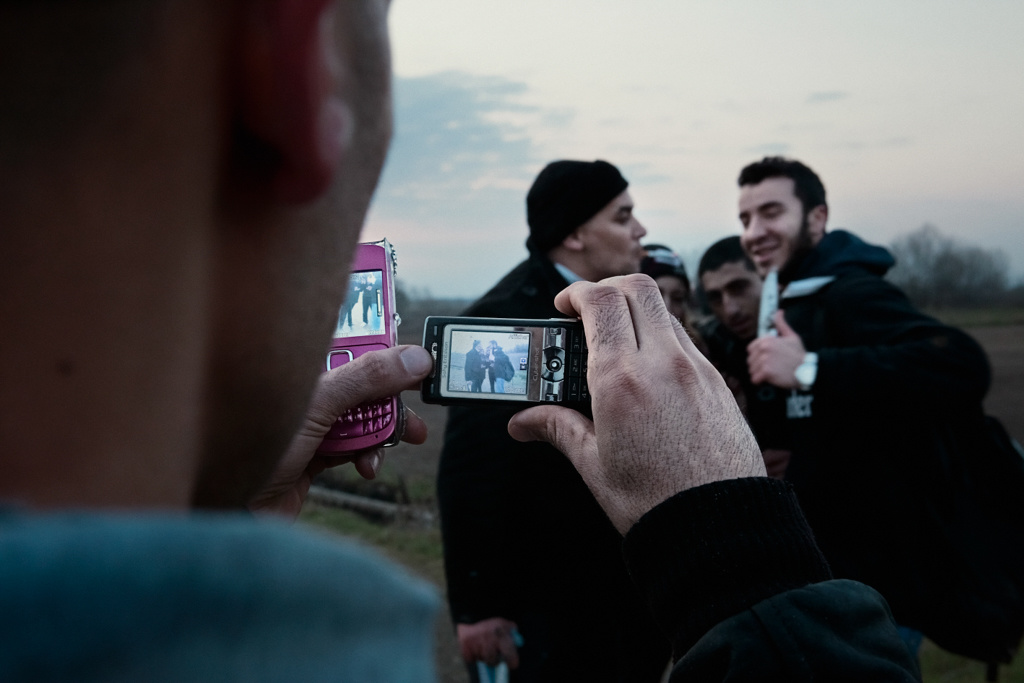 Pithio – A group of Algerians who have just crossed the river Evros take a souvenir photo as a memory of their adventure at the crack of dawn. They can’t believe they are safely arrived in Eu- rope and are happy, even if, after the risk they run while crossing the river, they know that the future will be precarious and uncertain. 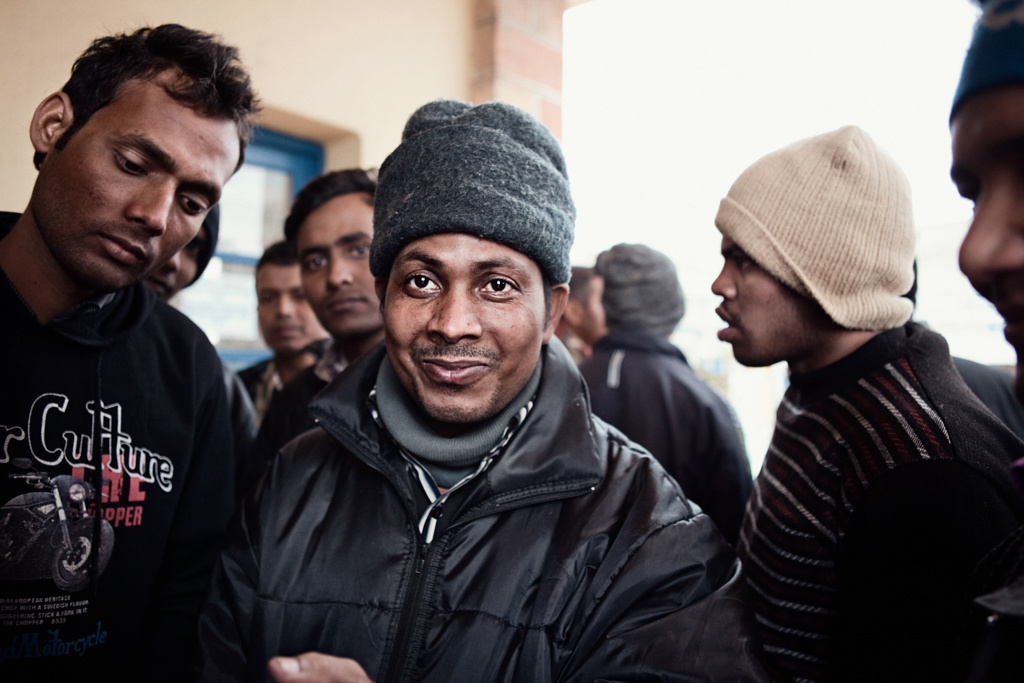 Train station of Alexandropoli – Skail, 25, from Bengali, left almost two months ago a village near to Dacca. After the visit and identification as per the usual procedure he was granted with a temporary permission of 30 days. He is now waiting for the train to Athena. 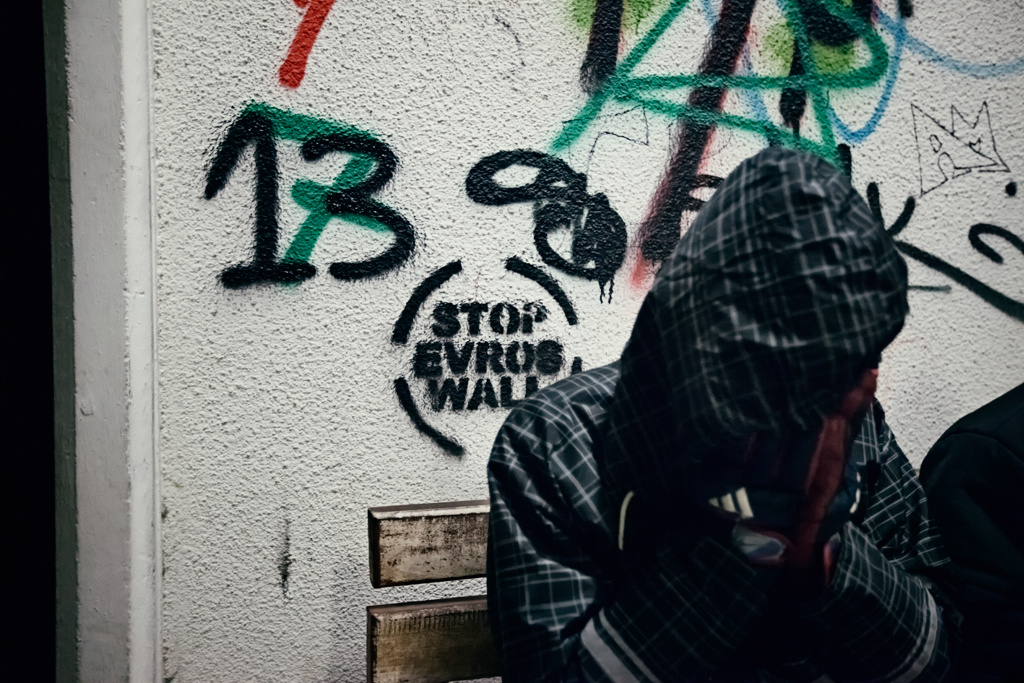 Orestiada – A group of Bengalis and Afghans is waiting for the train to Alexandropoli. The winter cold makes their waiting seem to be longer. Sharif, 28, Afghan, covers his face to protect against the cold; he has not been sleeping for three days. Few kilometers off North the project of the wall which should stop the immigration is starting. 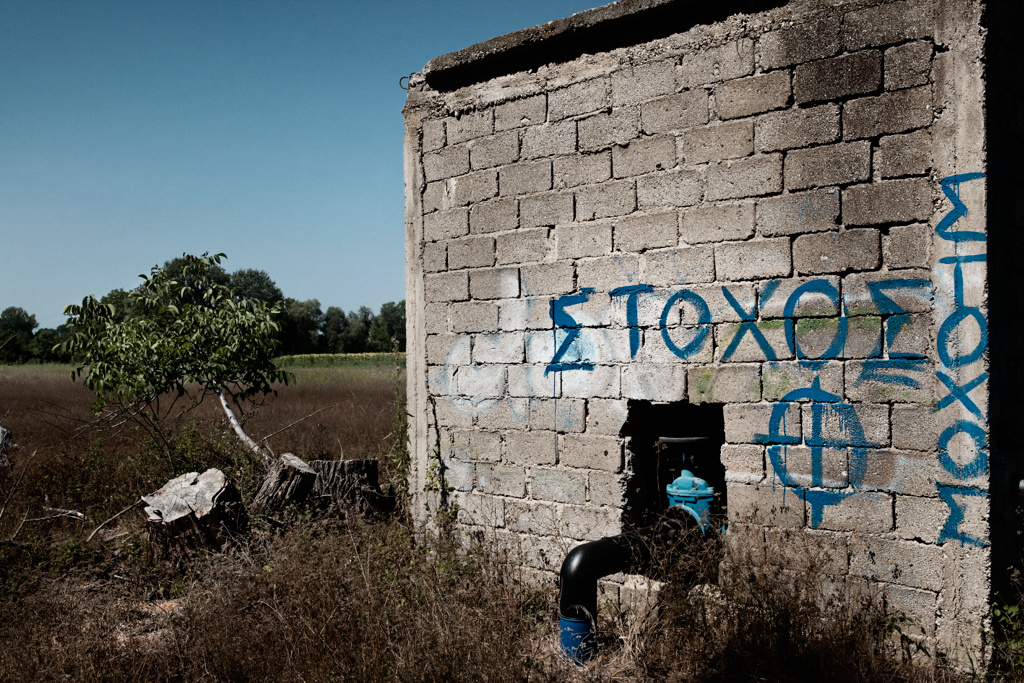 Orestiada – Xenophobic groups are imposing them- selves in Greece, while the politicians say that one of the main reason for the economical crisis is the problem of the immigration. Among the Neo Fascist Groups, the Group Chrysi Avyi (Golden Dawn) is one of the largest one. This group, which belongs to the network European National Front, commit- ted acts of violence and aggression against the migrants many times. On 28th March 2012 Chrysi Avyi organized a procession to give the green light to the police forces to fire the migrants who pass the border and to support the position of the antipersonnel mines which were banned by the Geneva Convention. 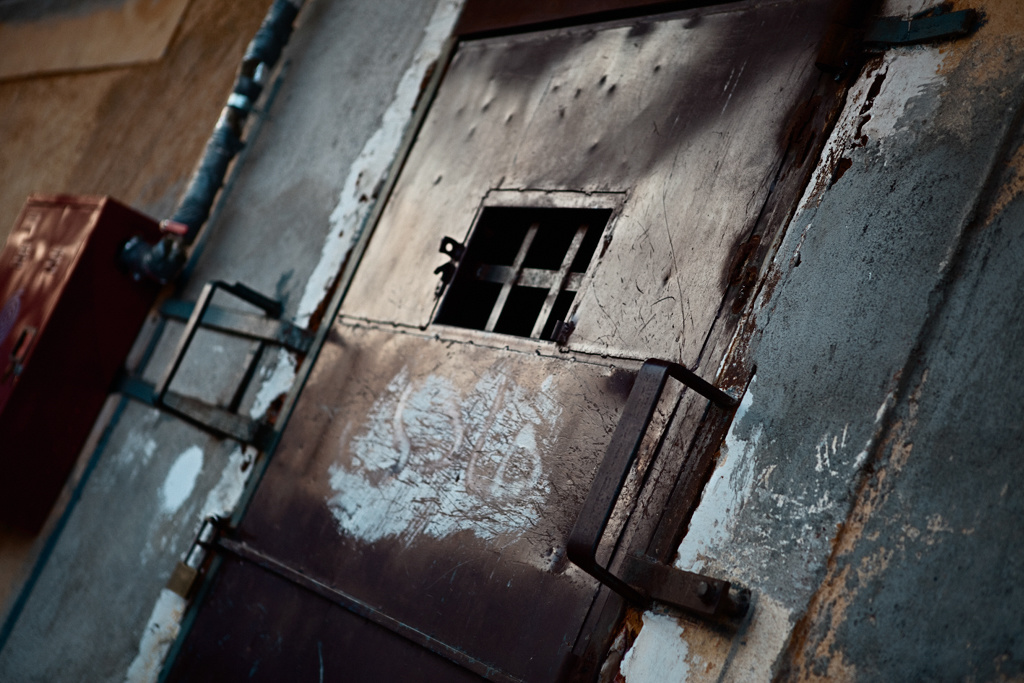 Venna – Few kilometers off Komotini there is one of the few detention centers for migrants still functioning. Due to the high frequency and the problems of total neglect and lack of assistance reported by Doctors without Border, to redeem itself Greece started a renovation of the centers of Filayko and of some detention barracks for migrants. Furthermore, at the end of March 2012, the Ministry of the Interior started a project to build 30 detention centers with a total capacity of 30,000 migrants. 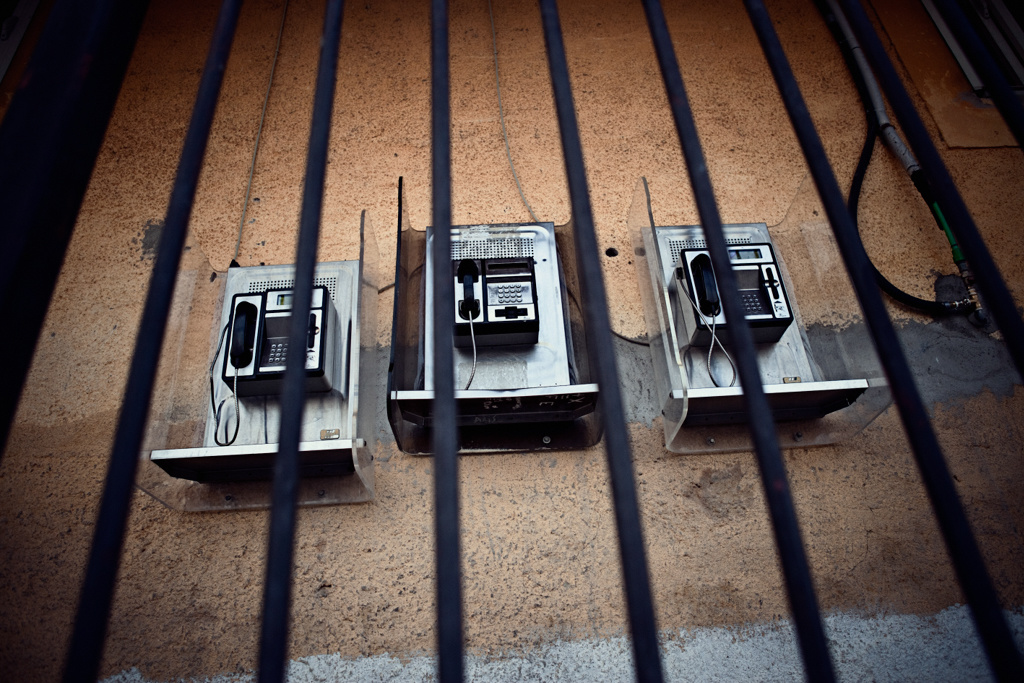 Venna – The temporary detention centre of Venna can host 90 migrants. The prisoners have not committed any crime, but their cases need to be better analysed. As explained by Kamargios, spokesman for the police forces in Alexandropoli, the migrants are kept in the temporary centers to check their origins or to solve bureaucratic problems. The agent who is responsible of this structure mentions that the prisoners can be freed and left some kilometers before the first city with public transportation when they have completed all the necessary paperworks, which can take from one day up to three months. 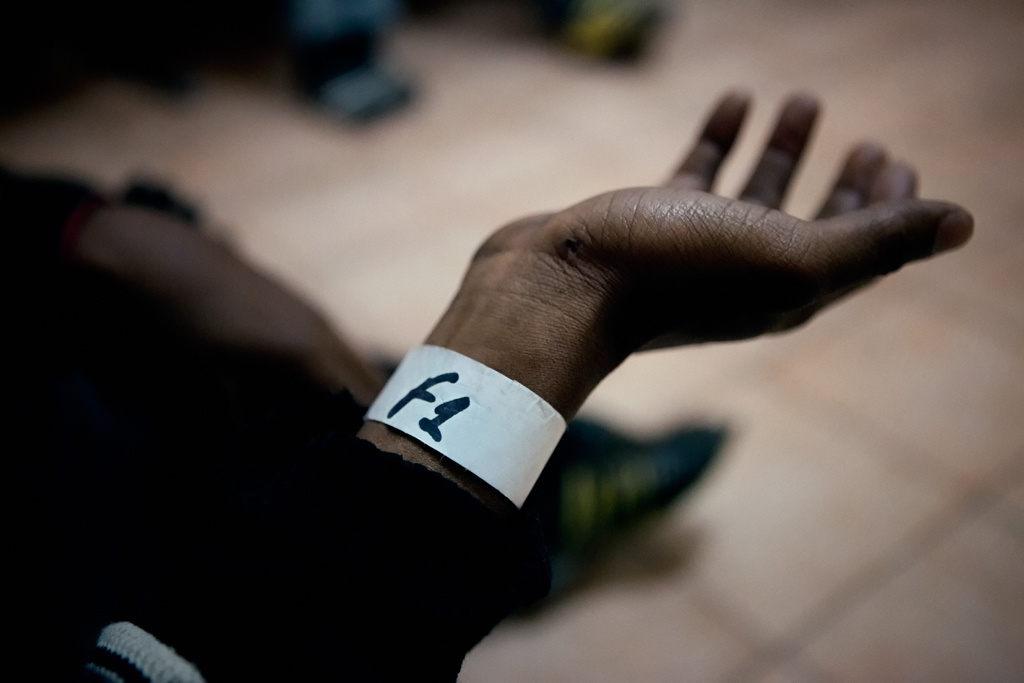 Alexandropoli – To be identified the migrants are forced to leave their mobile phones and personal belongings outside the barracks.They are divided into groups, visited and scheduled. Some of them are released with a 30 days permission while others are kept in the detention centers. 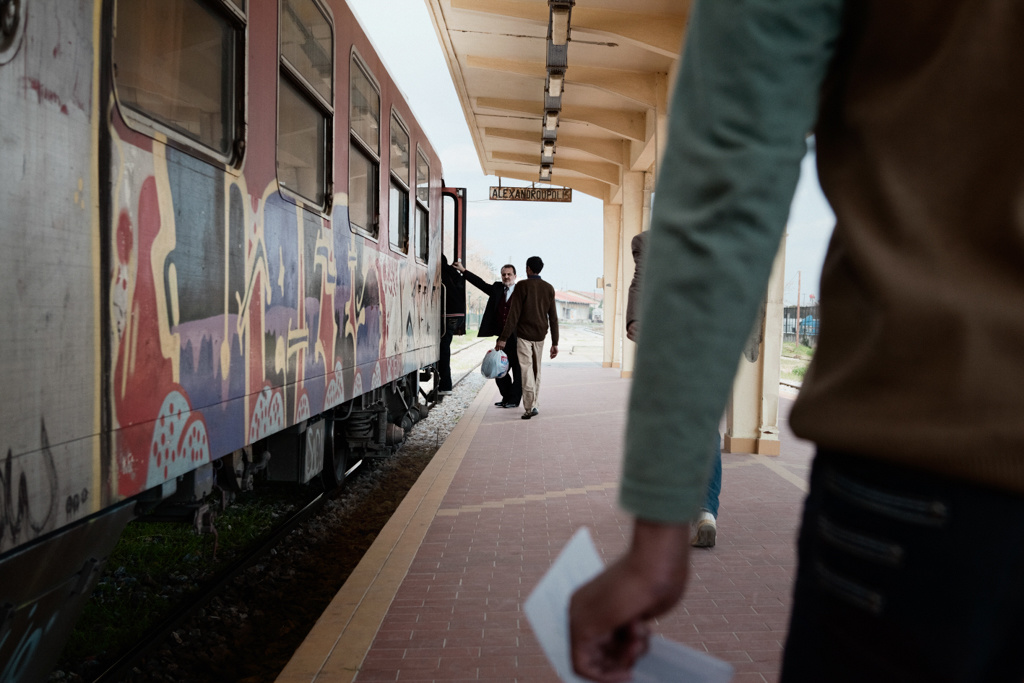 Alexandropoli – Two Pakistani boys, who have arrived in the morning after crossing the river Evros, are catching the train for Athena. Alexandropoli, which was named in this way after 1920 (its old Turkish name was “Dedeagacche”, which means grandfather tree) is the town south Evros, the fun- nel neck where meet all the migrants who passed the oriental border of Greece . Every day hundreds of migrants wait for the train or for the bus to Athena. 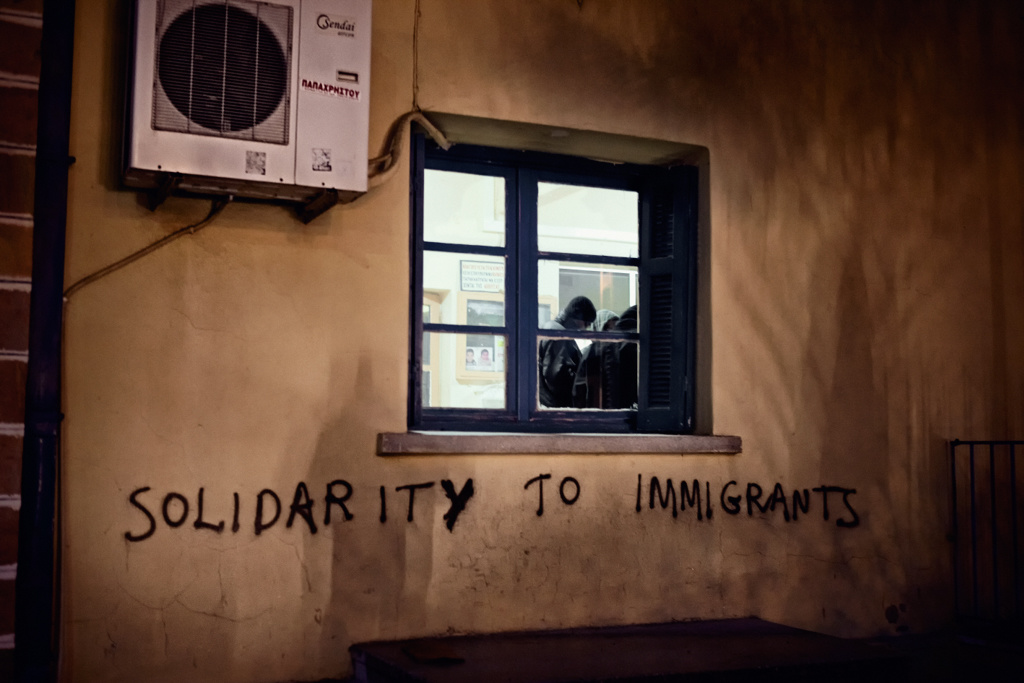 Alexandropolis – In spite of the campaigns against the immigration there are many solidarity groups to support the migrants, such as the group Stop Evros Wall, which controls the construction of the wall, or humanitarian realties as Doctors Without Border.. 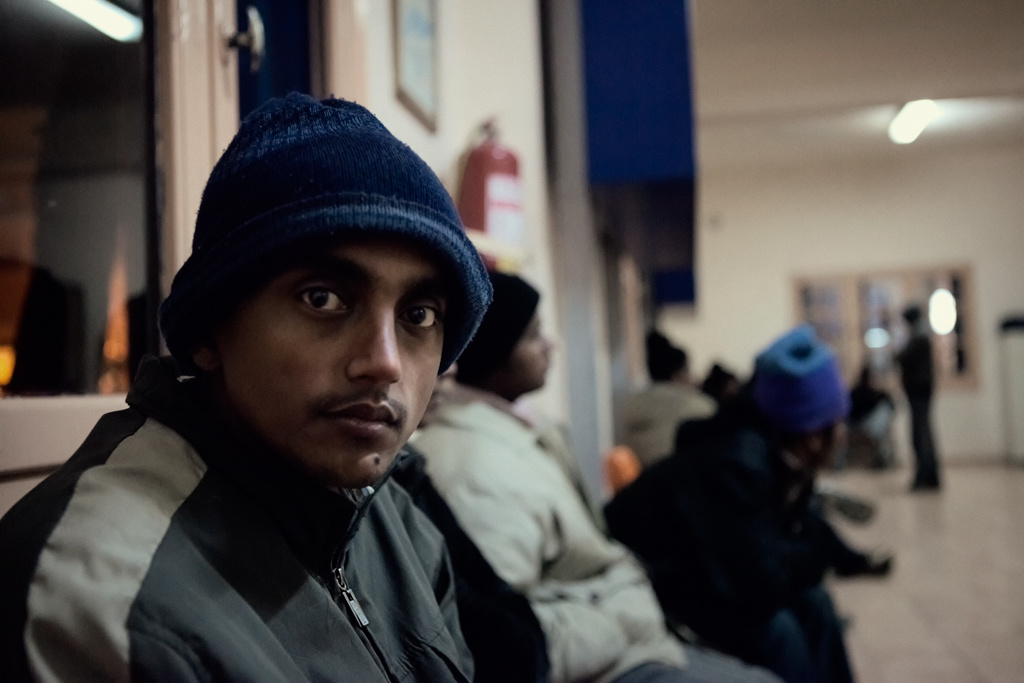 Alexandropoli – The migrants who lose the train at 3:40p.m., the last train to Athena, must wait until the next morning. The cold wind sweep the rails and until 10:00p.m. they stay in the station and after the station closes they stay in the street. They are very tired, hungry and sleepy, but their hope lies between a ticket train for Athena and a temporary permission for 30 days. 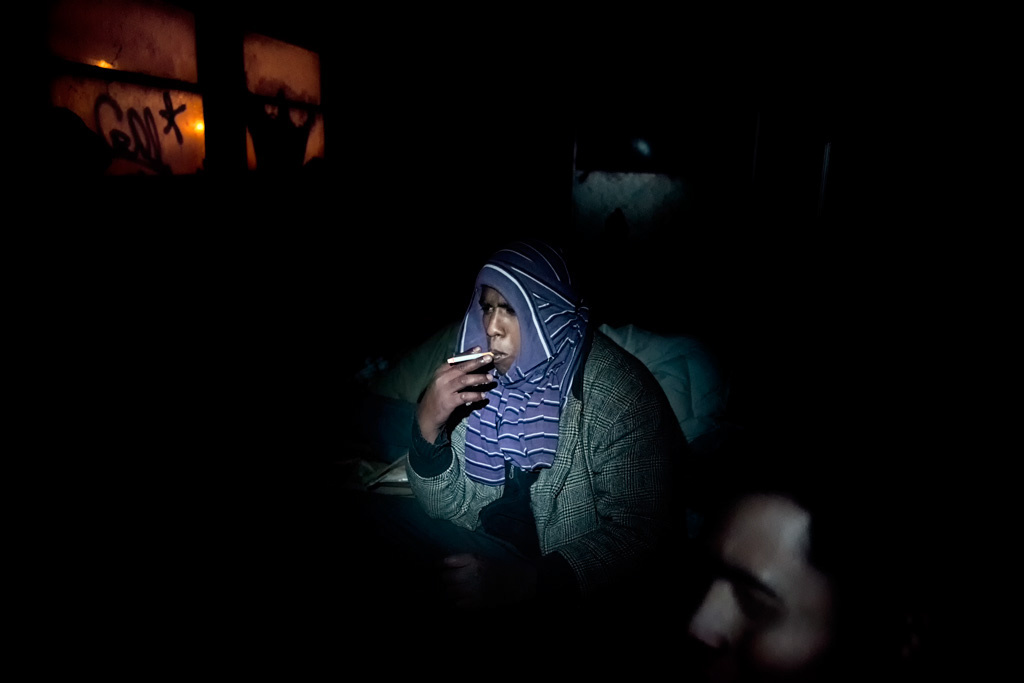 Alexandropoli – After 10:00p.m. the train station closes and the migrants can find refuge in an abandoned train. The train is dirty, full of dust and waste and they sit one near to the other to warm themselves. 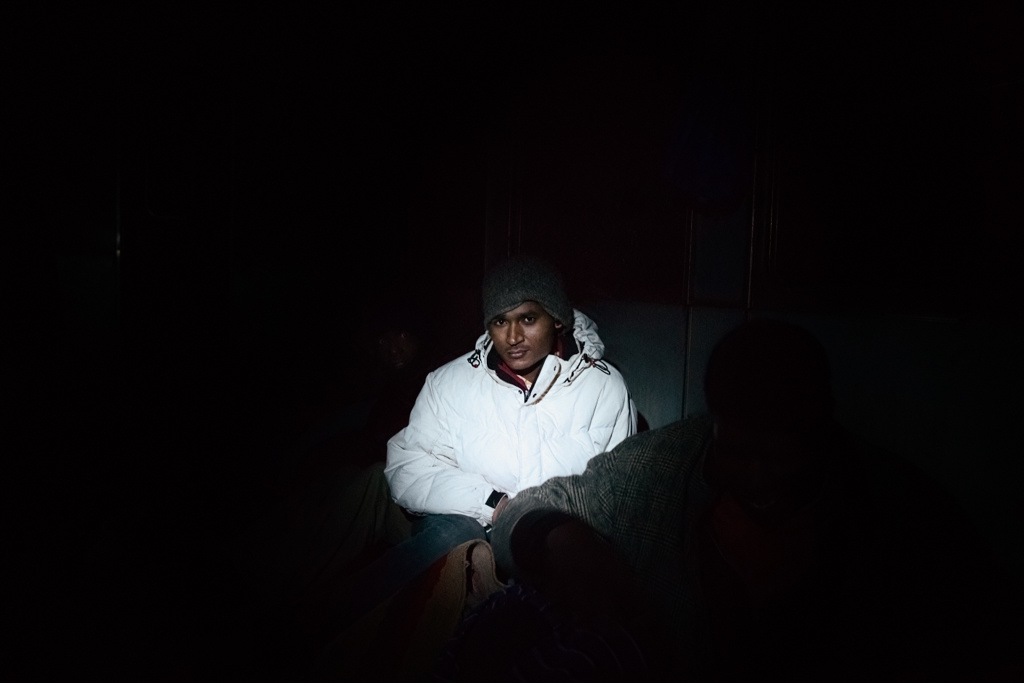 Alexandropoli – On the following day the migrants will arrive in Athena, a town with nearly 700.000 inhabitants, of which more than 10% are migrants. On 30th March 2012 about 500 migrants without the permission permits were imprisoned during the po- lice action called “clean Athena”.The crossing of the river Evros is only the first of the many obstacles the illegal immigrants have to face to enter into Europe.