Syrian refugees have been welcomed by the government Morsi as war refugees and created a large community in different cities of Egypt.The most important one settled in 6th October City, 40 km from Cairo. Over the time, apartments and basic necessities were distributed to refugees, who slowly started businesses in Egypt and brought there most of their families. After the coup that deposed President Morsi, the situation for refugees underwent a drastic change.
Judged as allies and supporters of the Muslim Brotherhood and Morsi, and accused of taking to the streets in demonstrations, Syrians became scapegoats for the problems in Egypt and have been subject to attacks of any kind.They have been prone to strong pressures both from the population and the police.
A country with 75% of the population living in poverty looks at Syrian refugees as mouths to feed and determining a reduction of jobs for the Egyptians.The solutions to the problem seem to be forced returns of refugees to their countries and attempts to move them towards the borders of neighboring countries. Unwarranted arrests, including children, and violations of rights are more and more frequent. Strong media pressure also feeds xenophobia among the population. Shortly after the coup, a a multitude of charities in support of Syrian community has been destroyed by men armed with bats, leaflets saying “Fight the Syrian occupation and defend your jobs” were distributed in the streets.
Many Syrians chose to spend less time in public or to leave Egypt for Lebanon,Turkey and Jordan, exacerbating the refugee crisis in the region. Others chose to entrust their future to smugglers and fleeing by boat to Italy. Moreover, hundreds of Syrians were arrested and deported. 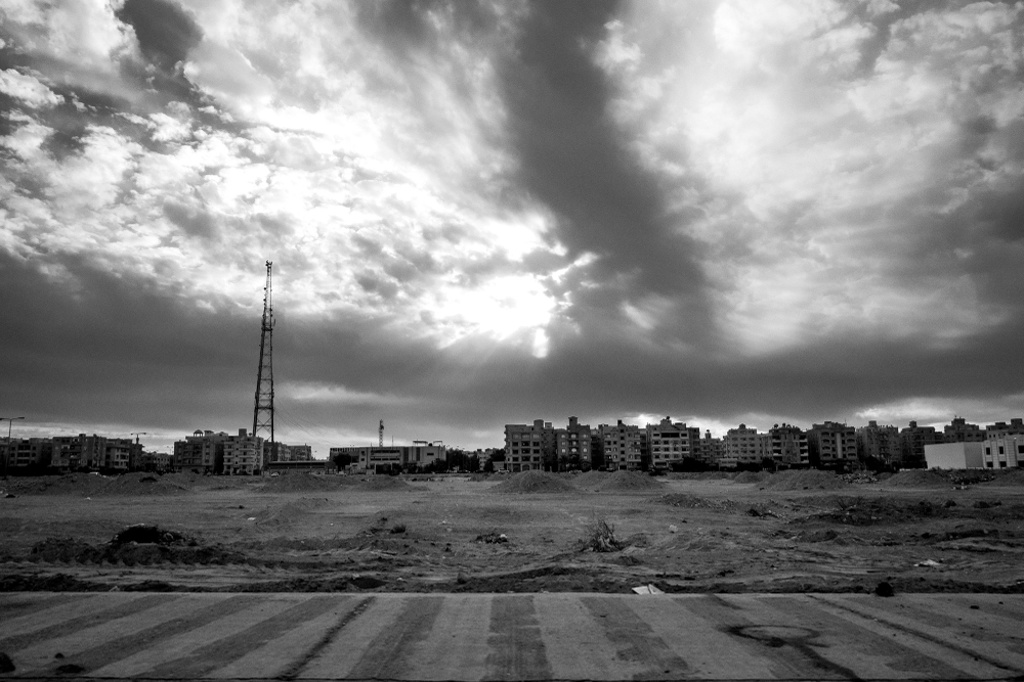 6th October City, the place where one of the largest communities of Syrian refugees of all Egypt arose. 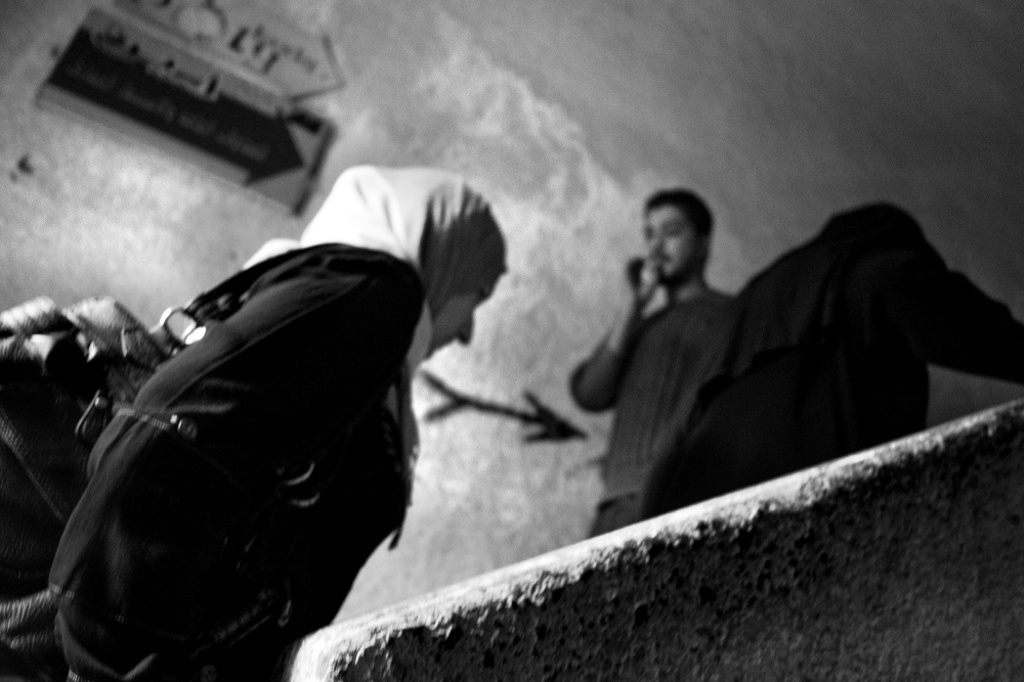 The Muslim Brotherhood, owners of many properties in 6th October City, often donated apartments to many Syrian refugees. 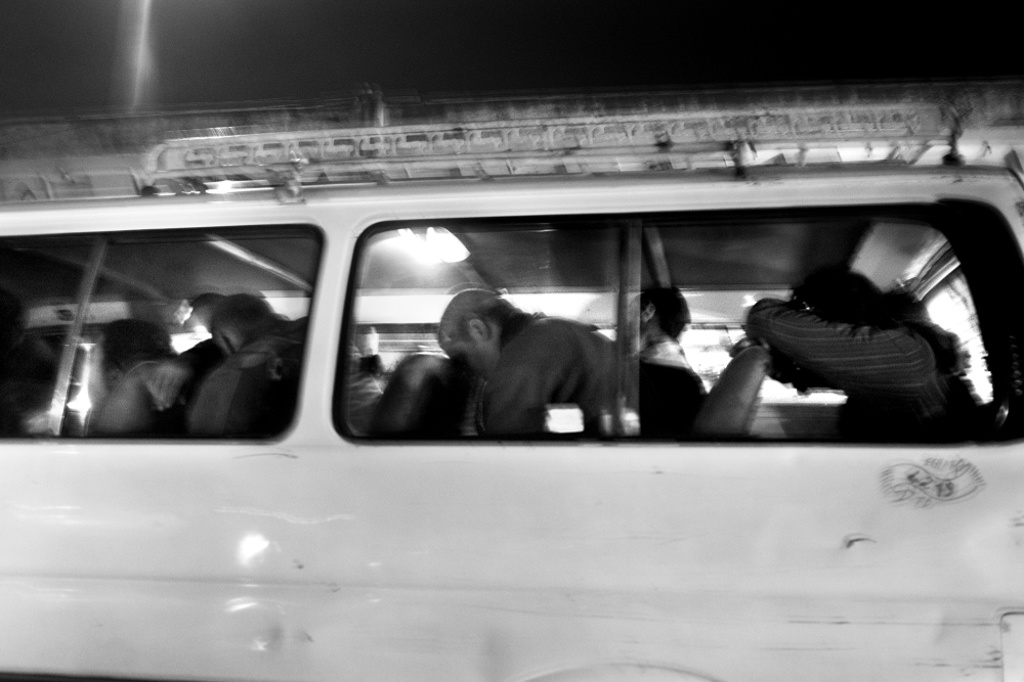 Many Syrians travel daily from 6th October City to Cairo to work. After the deposition of President Morsi, they have difficulty reaching their place of work because they are now subject to stricter controls and indiscriminate arrests. 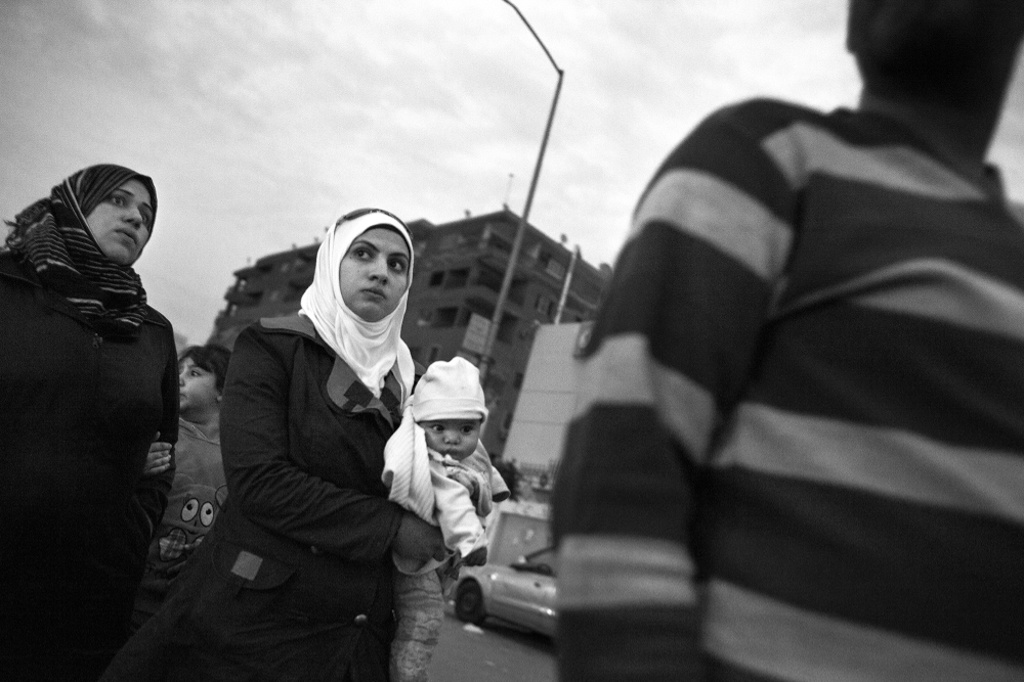 In the climate of xenophobia that has arisen against Syrians after the coup, refugees are living in fear even for the most common daily actions, such as buying essential goods. 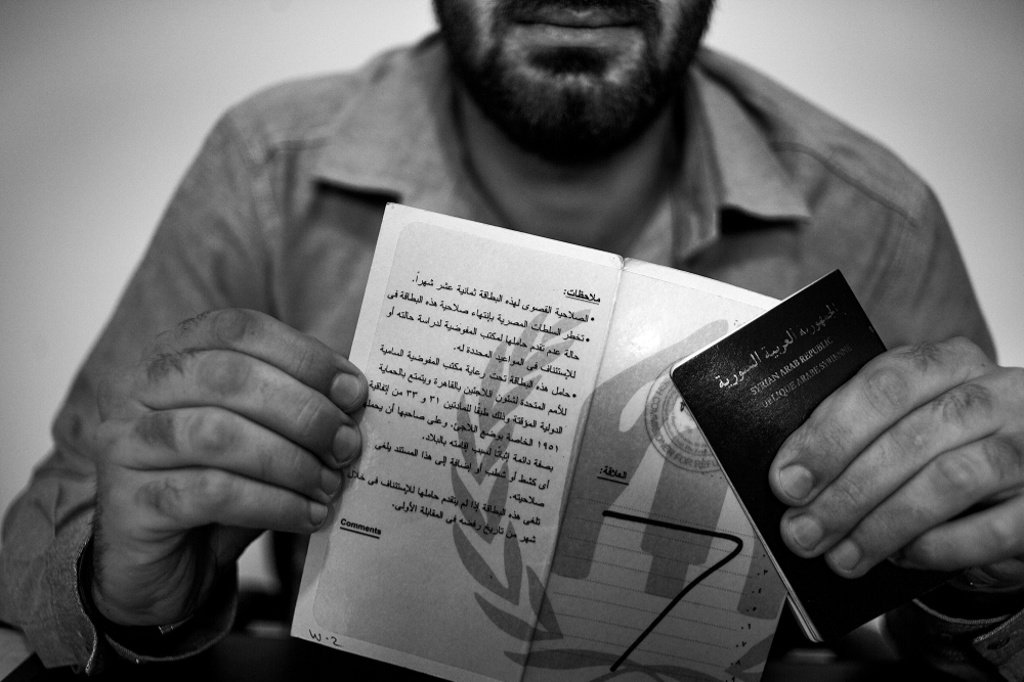 Entering Egypt, every Syrian is granted a one-month visa, and after the deposition of Morsi the visa regulation has been tightened. 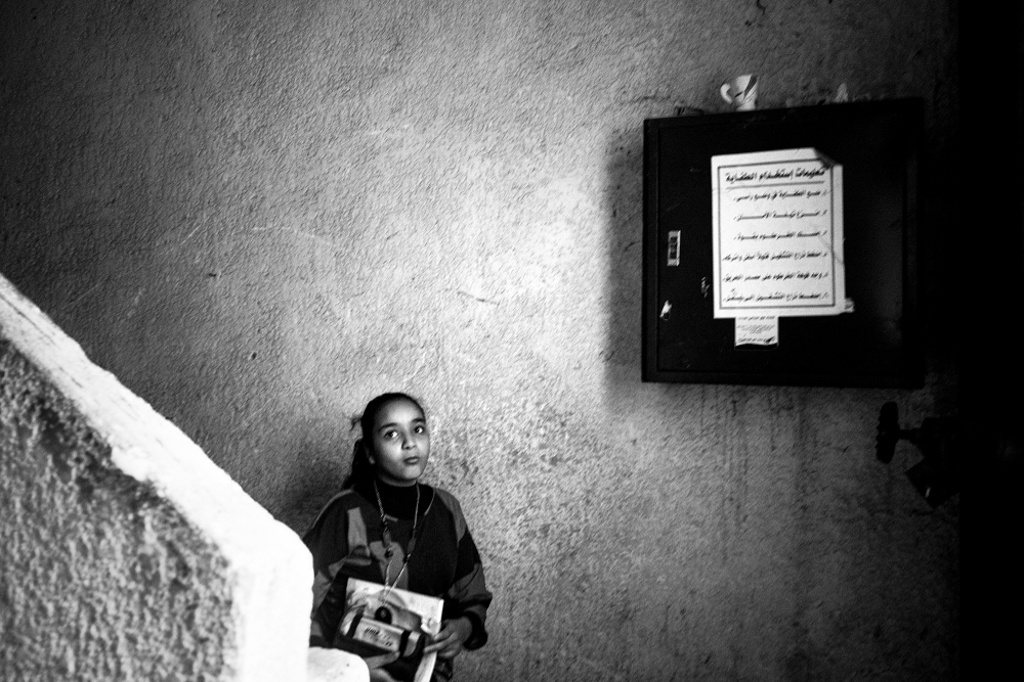 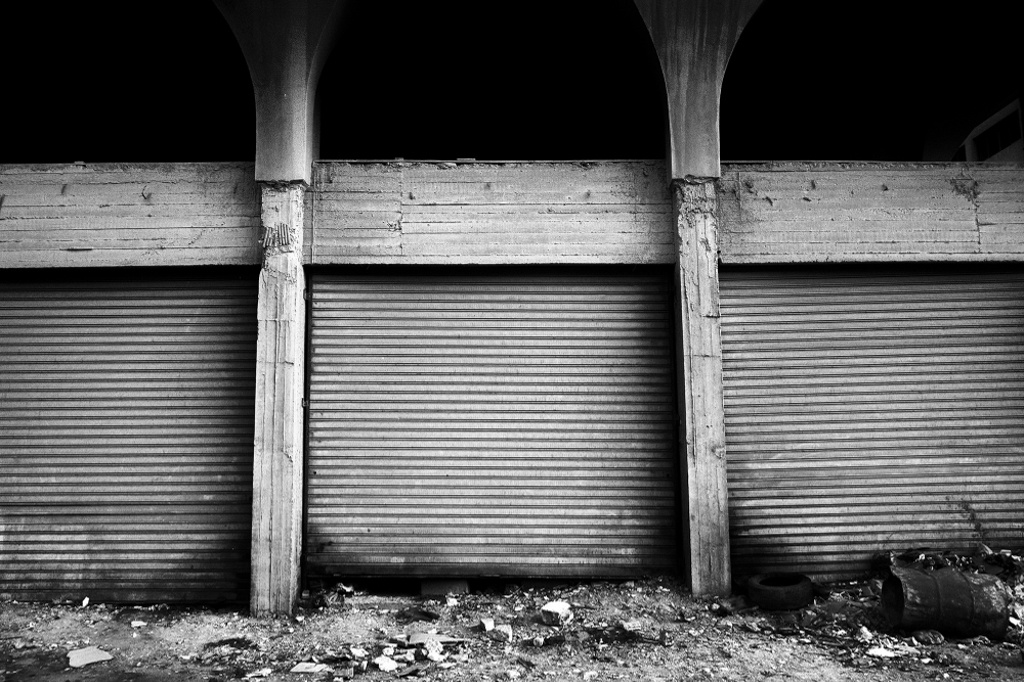 The Syrian community has managed over time to start several businesses. After the coup, the rise in rents of the premises by the Egyptian owners has actually caused the closure of many enterprises. 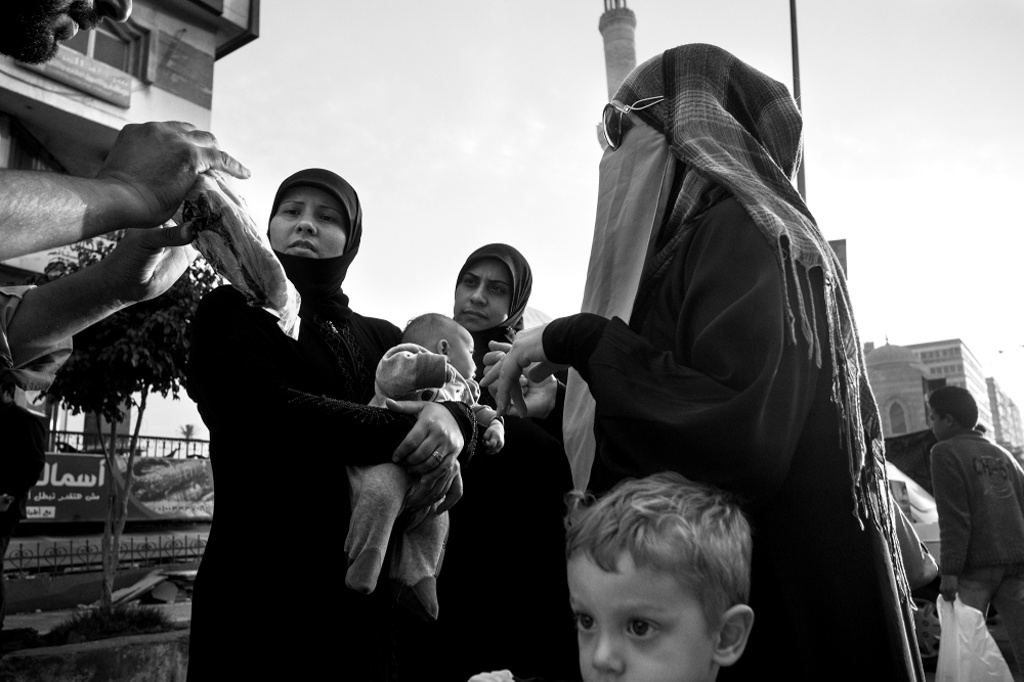 In the markets of Syrian neighborhoods groceries imported from Syria are sold, but this activity is increasingly difficult for both sellers and buyers, because of the controls and arrests by the Egyptian Police. 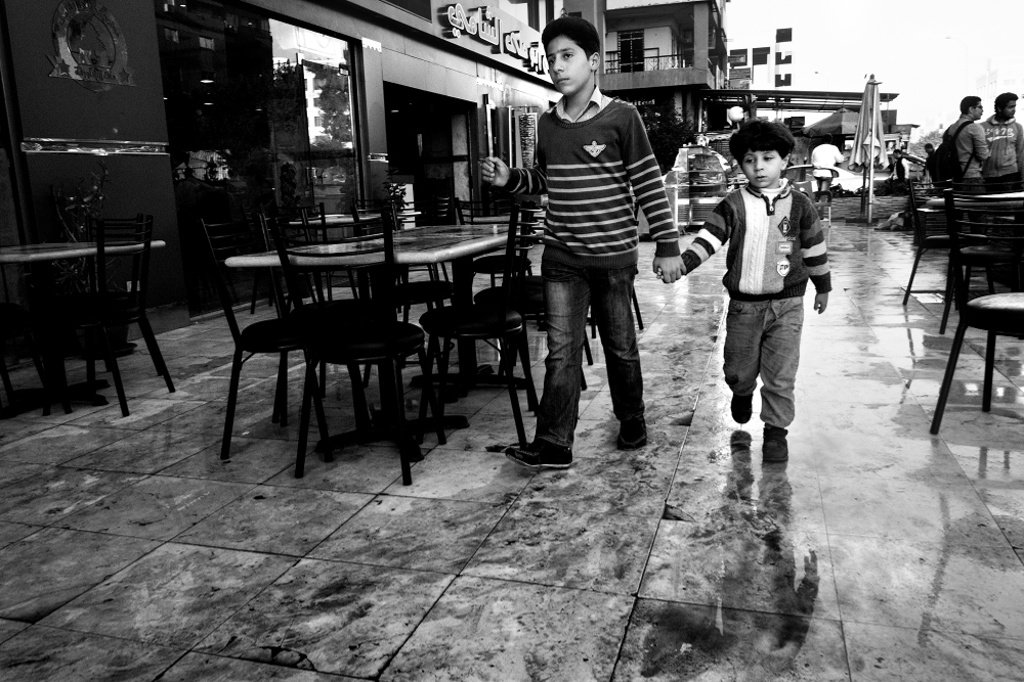 Children in their neighborhood in 6th October City, in the area called “Little Damascus”. 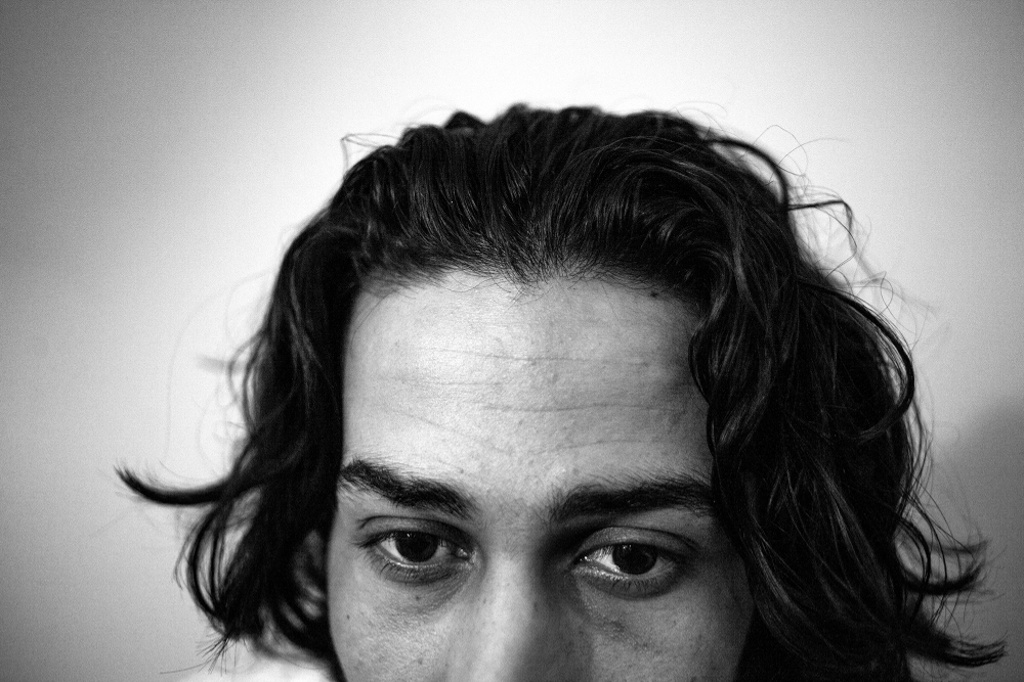 Syrian refugee initially escaped from the city of Homs to Lebanon. After leaving for Egypt in the period just prior to the coup, he couldn’t reunite with his family that should have joined him in 6th October City. 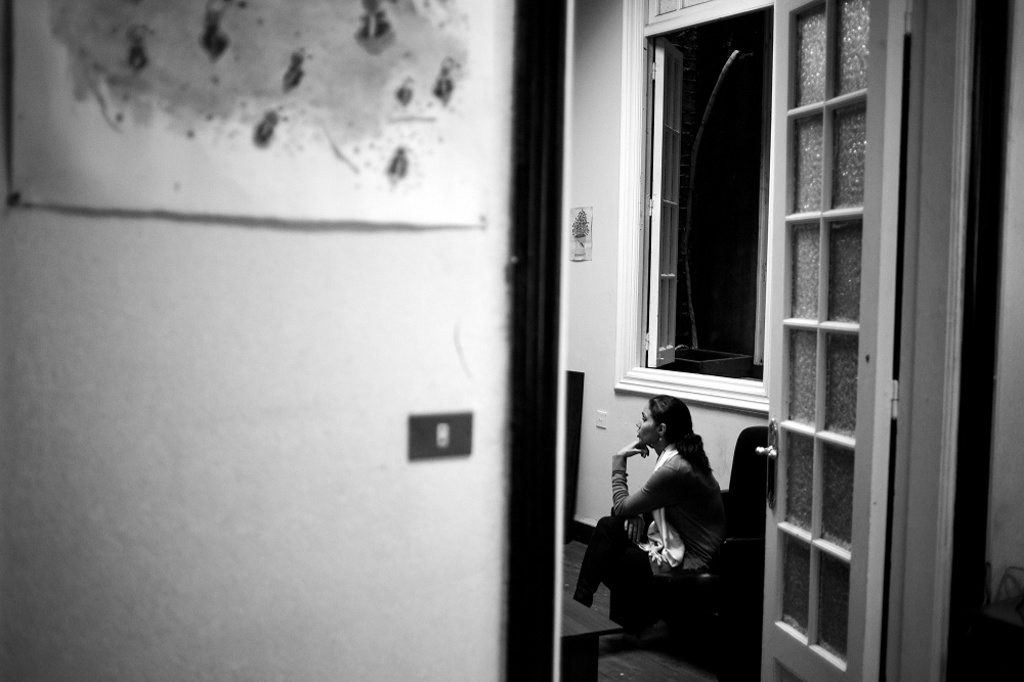 “Tadamon”, one of the associations in support to the Syrian community.It provides economic aid, health and education. 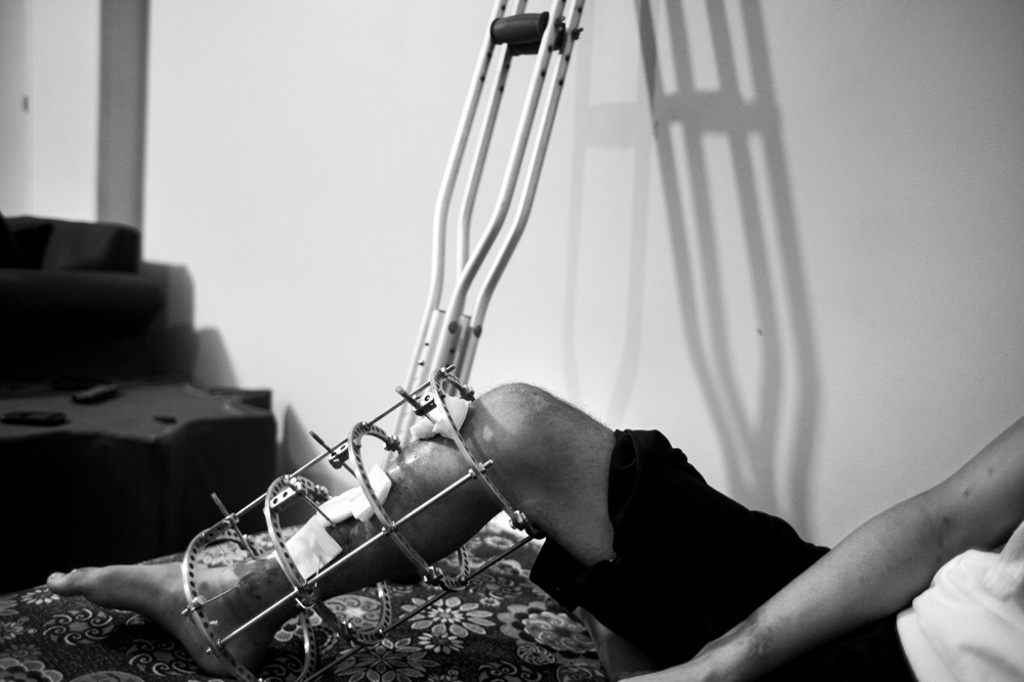 Wounded during the war in Syria, after having surgery in Lebanon and then fleeing to Egypt, this man was initially helped by the Egyptians. However, after the coup, he was essentially left without care. 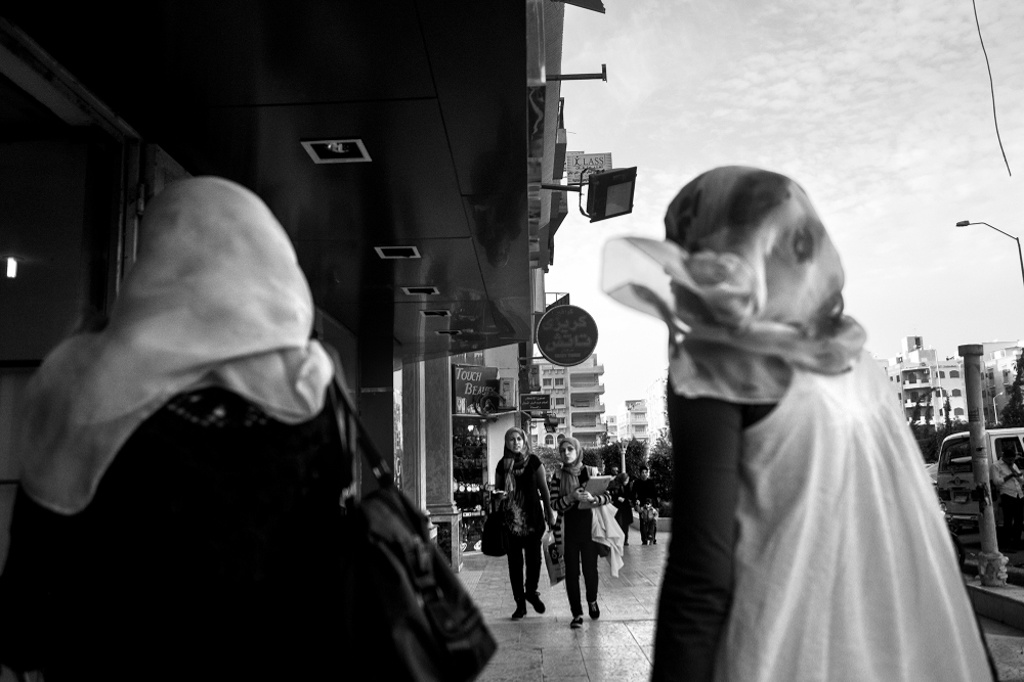 Daily life in 6th October City. In addition to the poorer Syrian families, there is also a class of wealthy refugees that despite better economic conditions also suffer the political consequences of the coup. 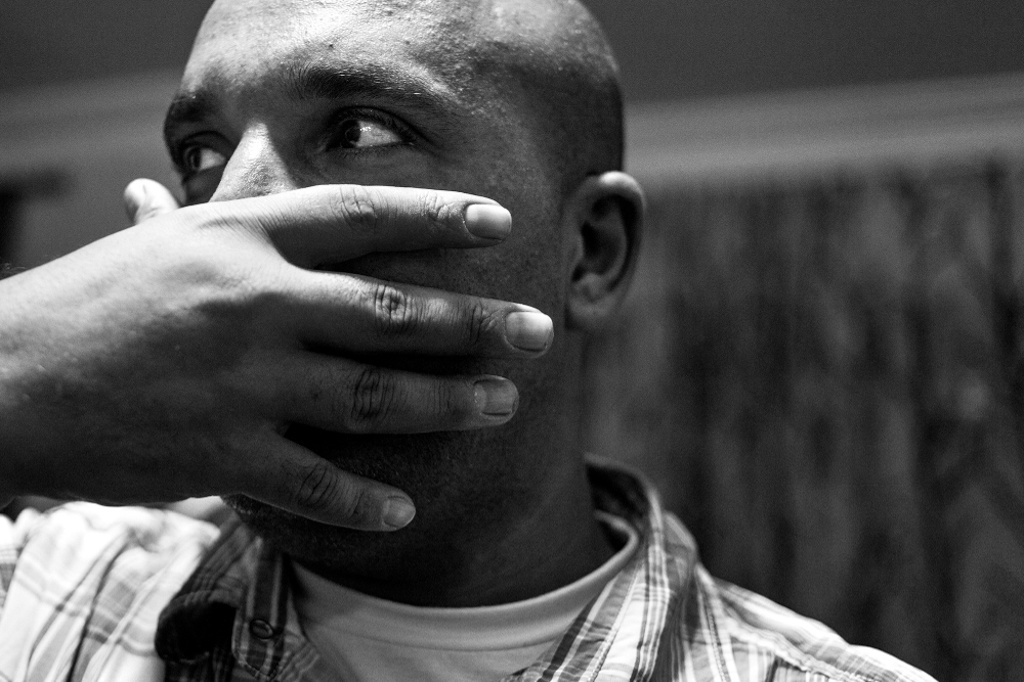 Escaped from Syria through Lebanon, this man found a job as a cook, but he encounters increasing difficulties in going out of his home, both for work and to go to the Mosque, due to the intensified controls by the Police. 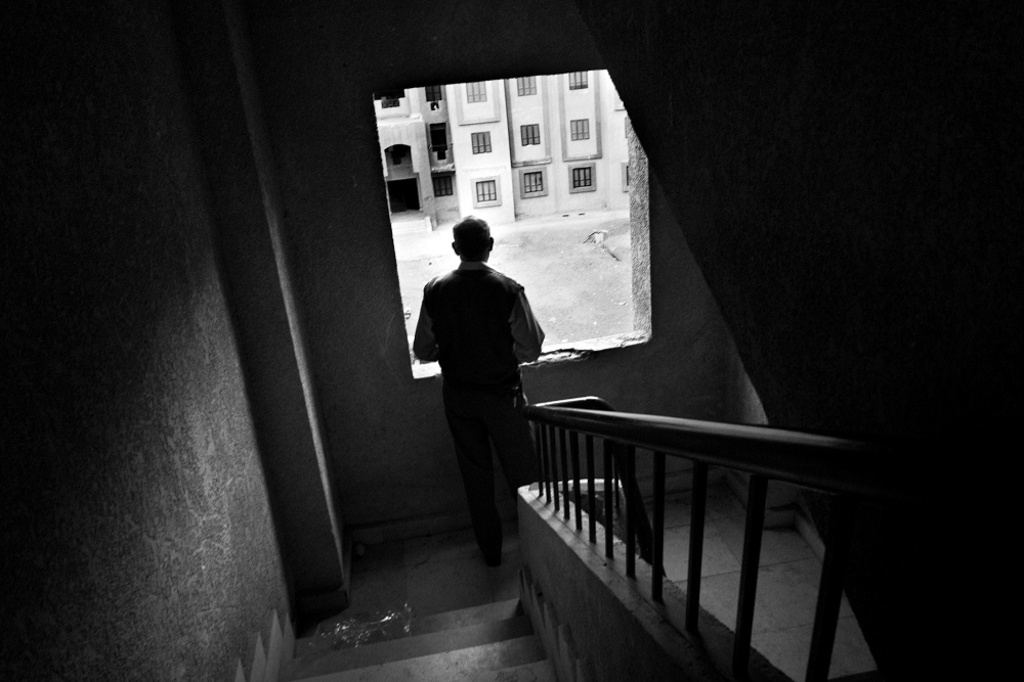 A Syrian refugee in 6th October City before leaving home monitors from a window on the stairs the presence of Police in the street. 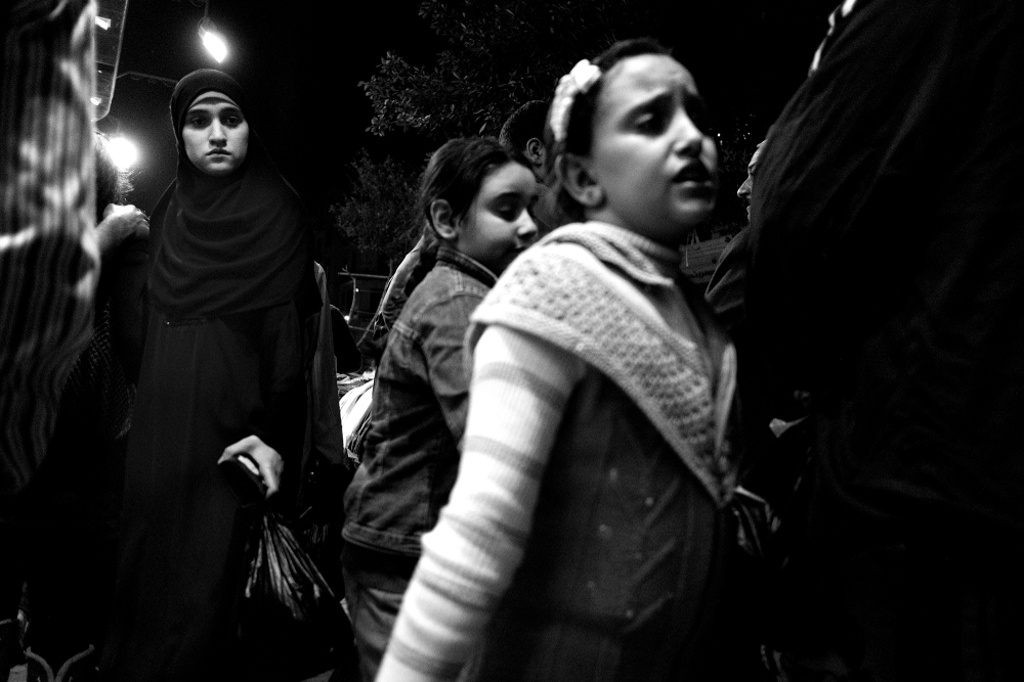 Syrians in Cairo. Even in less concentrated Syrian communities, there are great difficulties in daily life because of the xenophobic climate created after the coup. 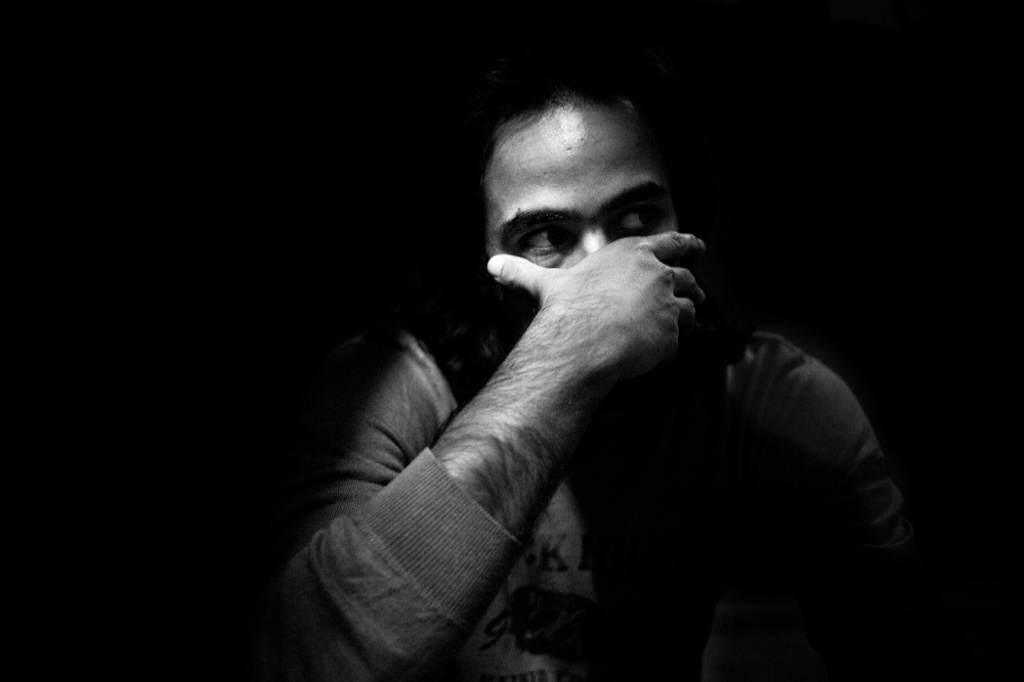 Syrian volunteer who works in one of the associations that arose in aid of the refugees’ community.

Photocopy shop in 6th October City. It is one of the many Syrian commercial activities in difficulty after the coup. 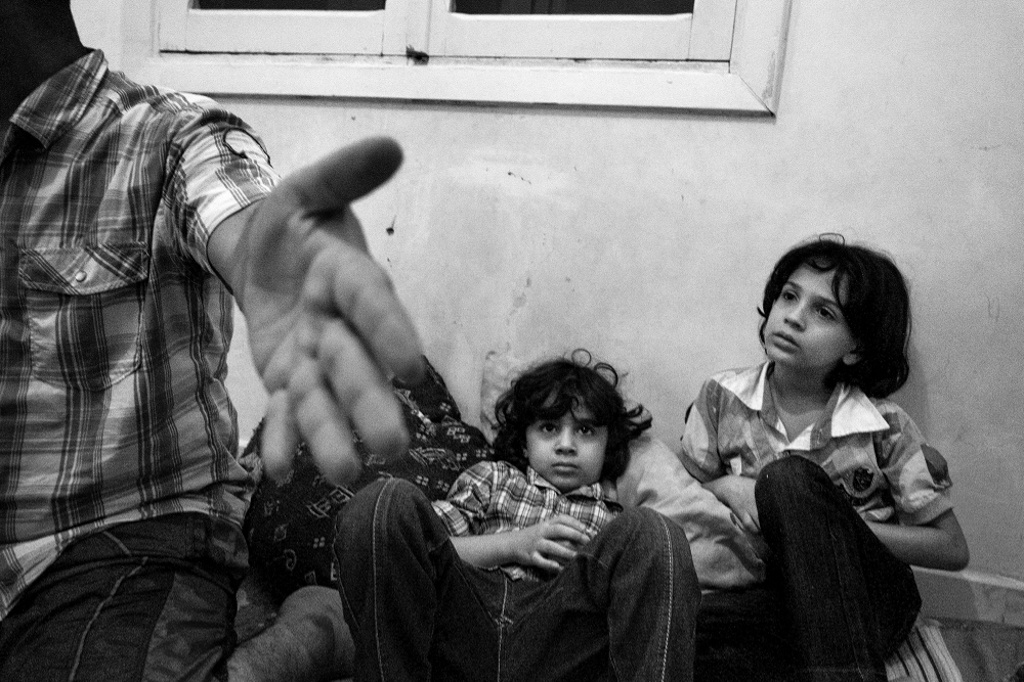 Many children suffered severe trauma in Syria because of the war and are supported by Syrian voluntary associations, that provide psychological and, when possible, material help. 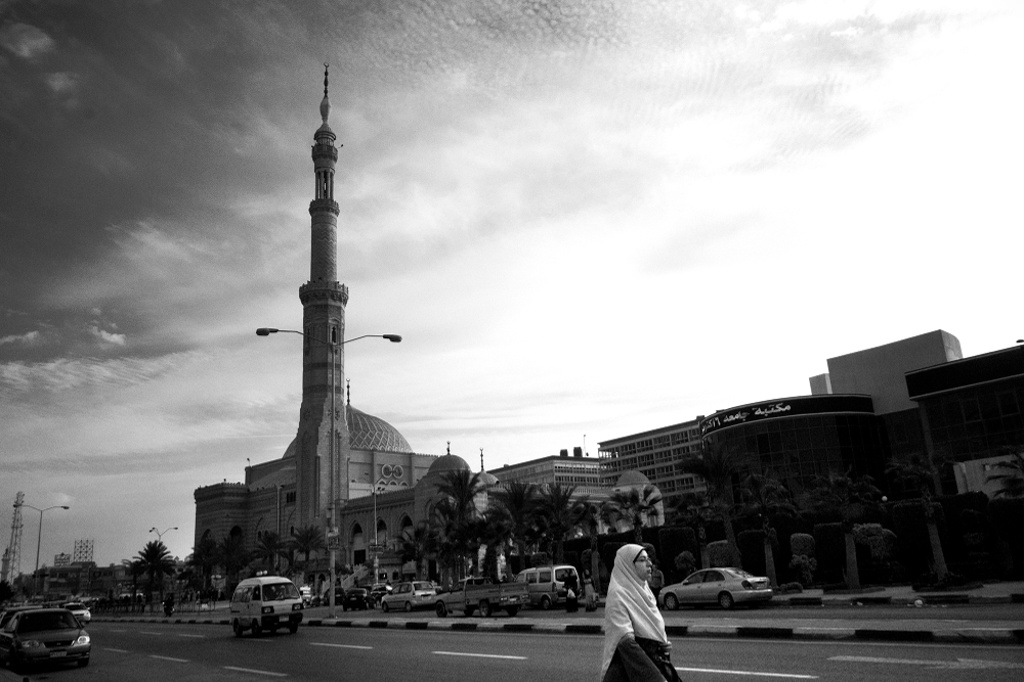 The Syrian largest district in 6th October City is called “Little Damascus”. Here all the Syrian commercial activities arose, including markets where imported products are sold. 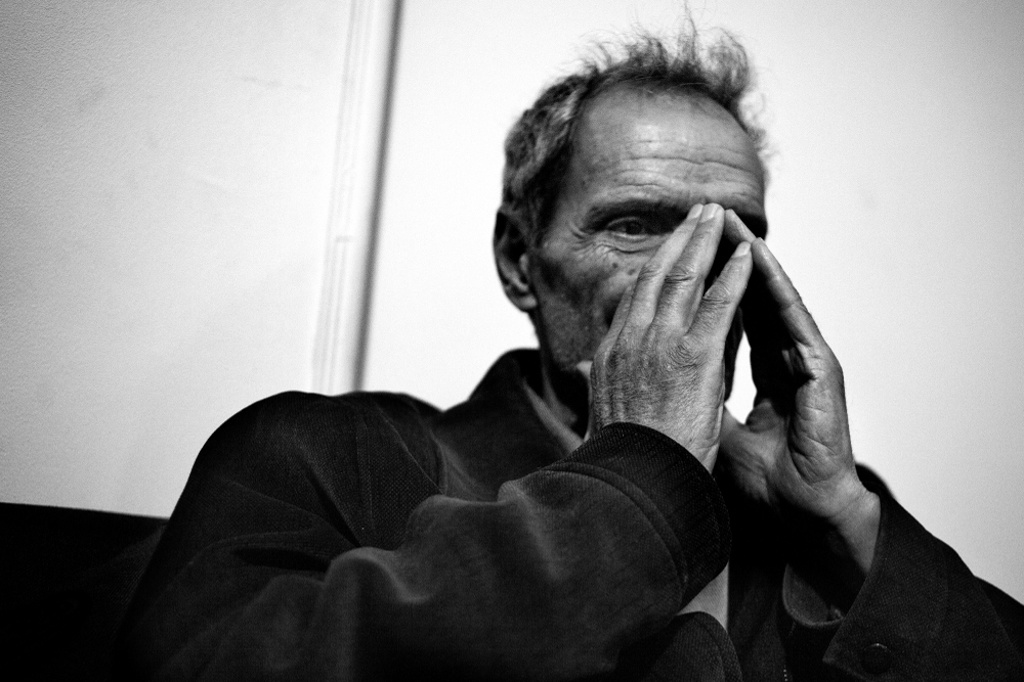 Escaped from Syria to Lebanon together with twelve family members, this man moved with them in 6th October City. Initially they lived in two separate houses, but later the increase in rents by the Egyptian owners now forces them to live in the same house. 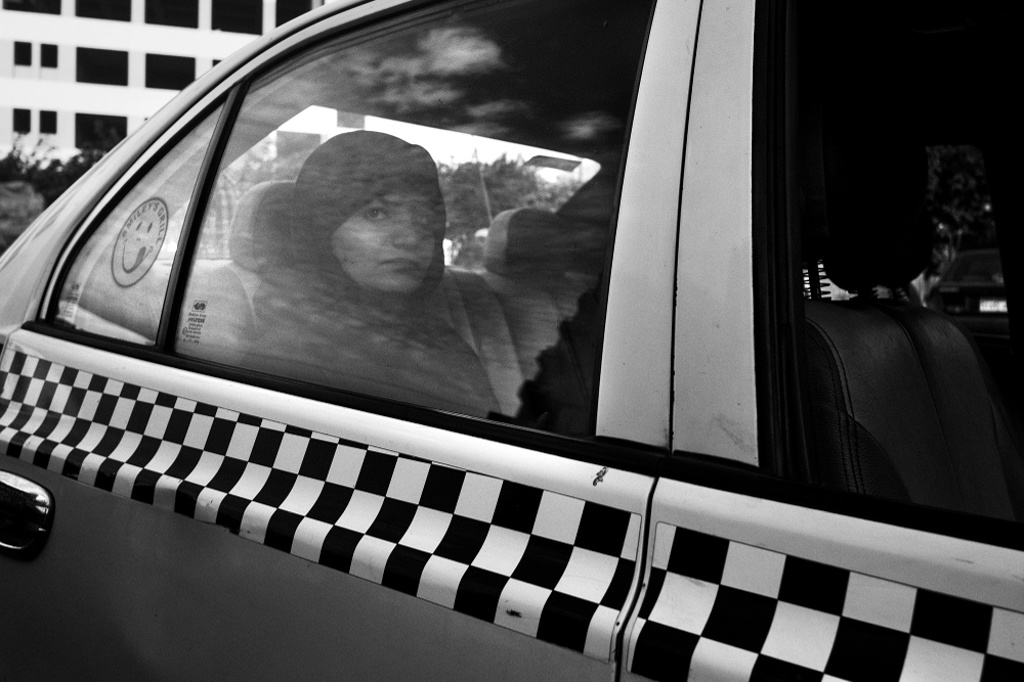 In 6th October City, the fear of controls and arrests induces Syrian refugees to leave their houses the least possible.Very often, the only daily itinerary is the one that leads to work, for those who have it. 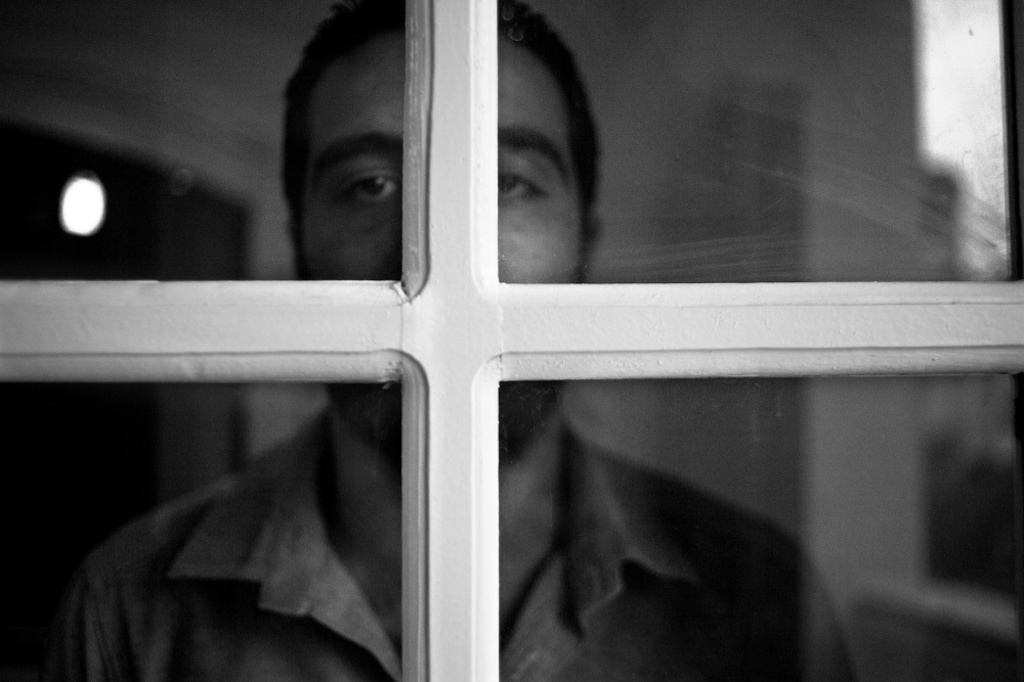 Arrested in 6th October City only for being Syrian, this man was arbitrarily accused by the Egyptian Police to take part in the protests in support of the Muslim Brotherhood.