After the beginning of the Syrian revolution, which ended up in a bloody war lasting for more than three years by now , over a million Syrians found refugee in Turkey. In a first moment they were hosted in refugee camps near the Syrian-Turkish border, but due to the daily life difficulties many of them decided to reach theTurkish capital. The former Prime Minister Recep Tayyip Erdogan favoured the Syrian immigration promising a concrete help, but after using the Syrian case for his project of Arabization ofTurkey, he abandoned the refugees to their destinies.

Unlike the migrants, who halt in Istanbul before recahing Europe with the help of the traffickers, the refugees can not be repatriated. The Syrians in Istanbul come from different social classes. Some of them stay in the Turkish capital waiting to seek refugee in Europe, others have invested capitals to open restaurants and commercial activities with the idea of remaining inTurkey definitively.
The poorest families, always emarginated by the Turkish people, live in difficult situations.The houses they stay in are often unsafe and without running water or heating. Thanks to the unity of the Syrian group in Istanbul were born associations and schools, which help the refugees providing them with food and medicine, educate their children and teach them theTurkish language.
The situation is creating discontent and tensions in Istanbul, especially among the conservative and ultranationalist Parties, giving birth to anti-Syrian demonstrations. “Life in Turkey is very hard, the Syrians can not work because they do not have the necessary permits and the only solution is to work illegaly.There are children who work 15 hours per day to bring to their families few money which are not even necessary to buy the bread.When the war is over I want to go back to Damascus, to my family, to my land.” 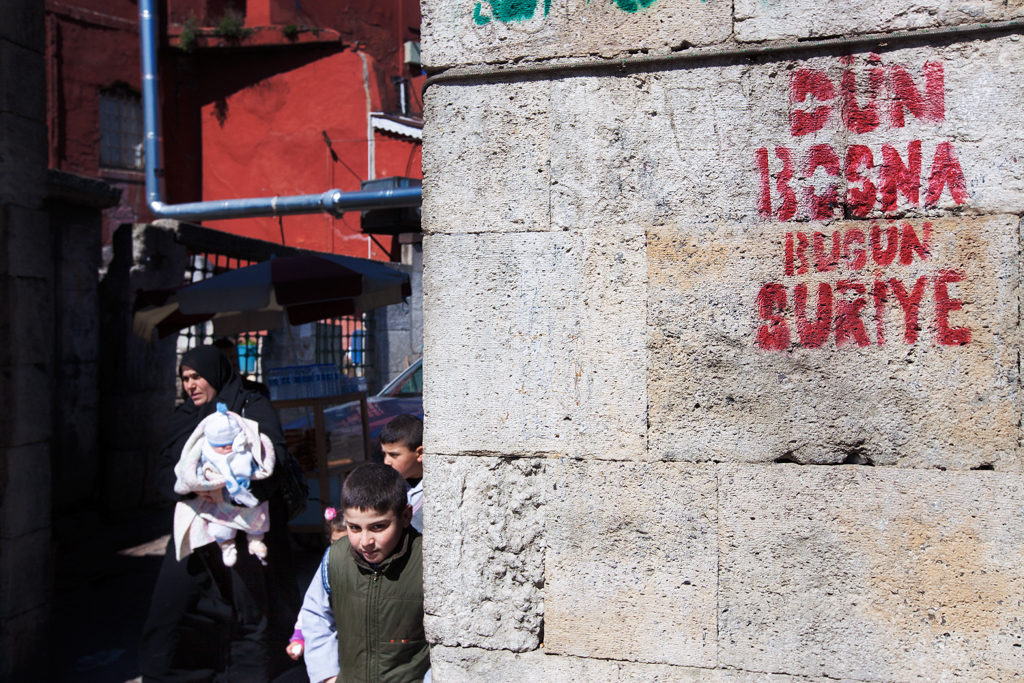 The wall near the Fatih Mosque bears a writing: “Yesterday Bosnia, today Syria”. The syrian community seeking shelter in Turkey counts about 1.5 million people. Syrian refugees try to reestablish their lives in Istanbul. 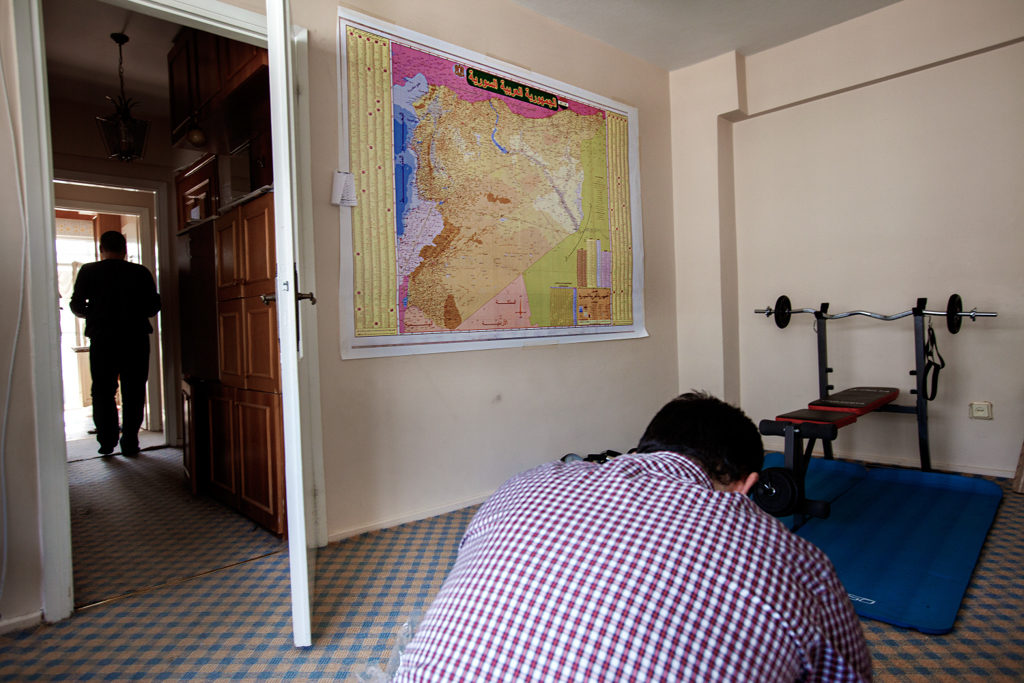 Refugees come from different social classes. Those who can afford it rent an apartment in Aksaray for 1000Tl per month and share it with other people. Usually the richer refugees think about escaping to Europe paying a smuggler, while others decide to stop in Istanbul and invest their money in commercial activities. 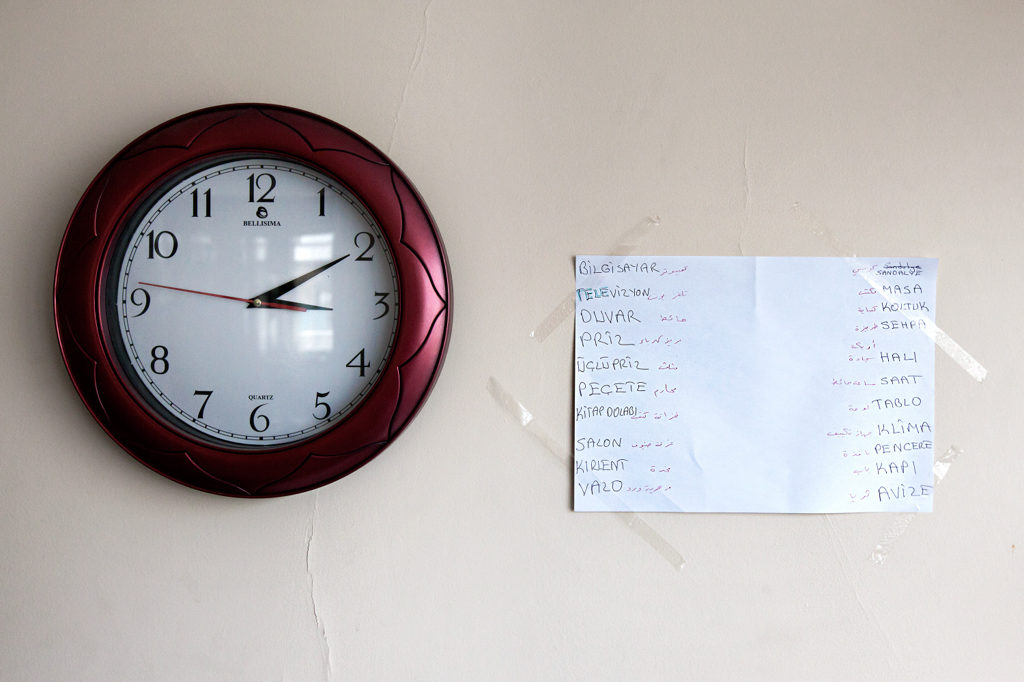 After the trip to Istanbul, one of the main problems for Syrian refugees is the language. Some words from the turkish and arabic languages are similar, but, due to the nationalism, a dominant characteristic of many turks, people who speak arabic are discriminated.

A., 12 years old, was found on the street from the owner of a Syrian restaurant. He and his brother were welcomed by the man, a former computer engineer escaped from war who started working as dishwasher. The two boys work until fourteen hours a day and they sleep in a room behind the refrigerator in the kitchen of the restaurant. 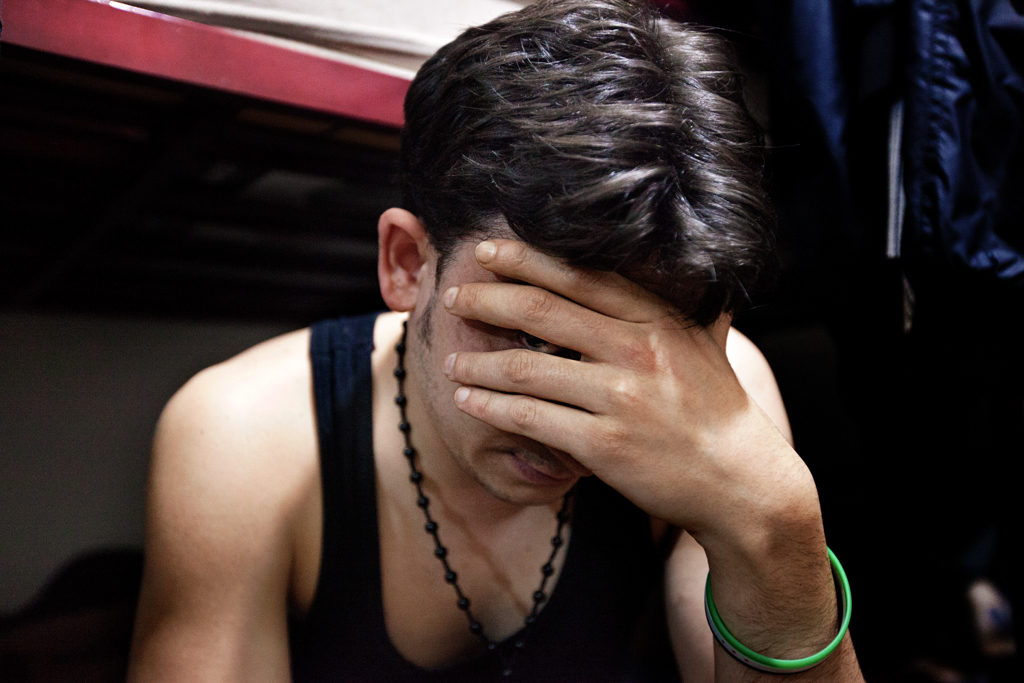 Those who can’t spend too much for the rent share small basements or cellars. Many Syrian refugees can’t work in Turkey because they don’t have a residency permit. O., 24 years old, escaped from Aleppo and works as a tailor without any job security. He left his family in Syria and is thinking of going back there to fight against the regime of Assad. 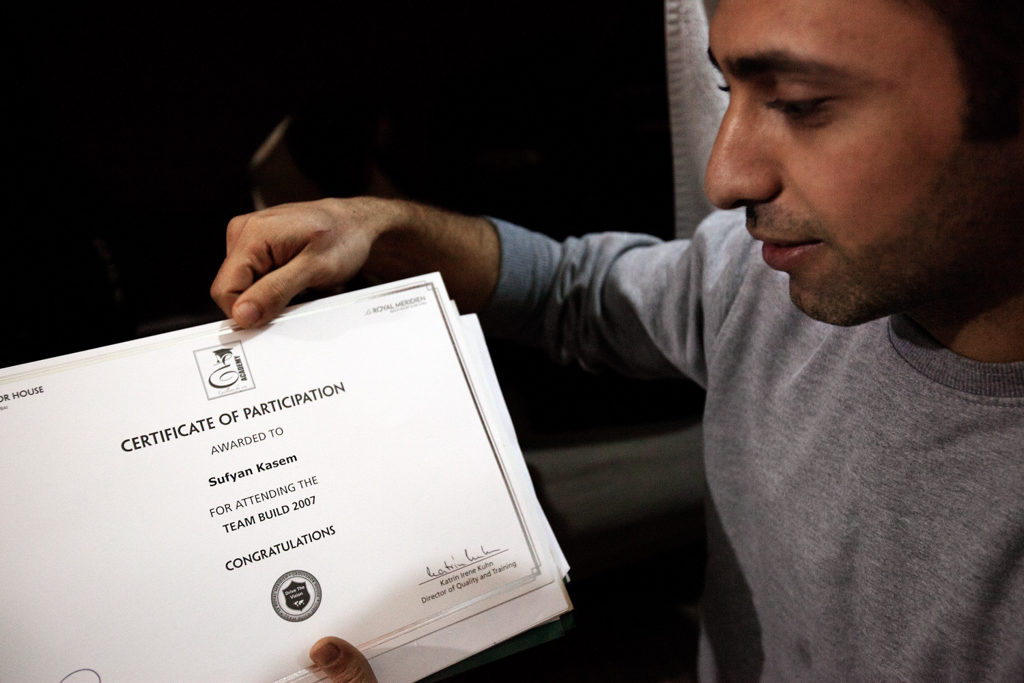 S., 30 years old. He graduated at a cookery school and worked for a long time in the Emirates. After the war began, he returned to his family and couldn’t get back to his work anymore. He went in Egypt, but after the deposition of President Morsi the situation became impossible and he had to travel to Istanbul. Here he works in a Syrian restaurant until fourteen hours a day. 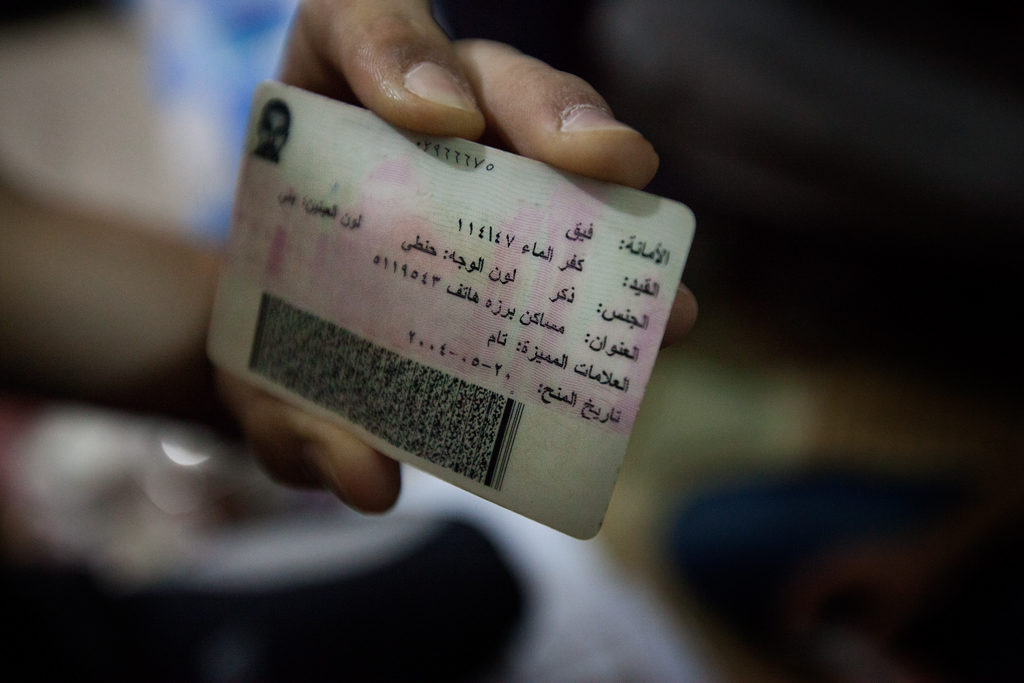 Syrian guy shows his ID. After telling that the Police of Assad arrested and tortured him for four days, he explains that on the ID there is a small sign that declares his religion. When he was coming back from University, the Police stopped him, checked his ID and arrested him because he is Sunni. 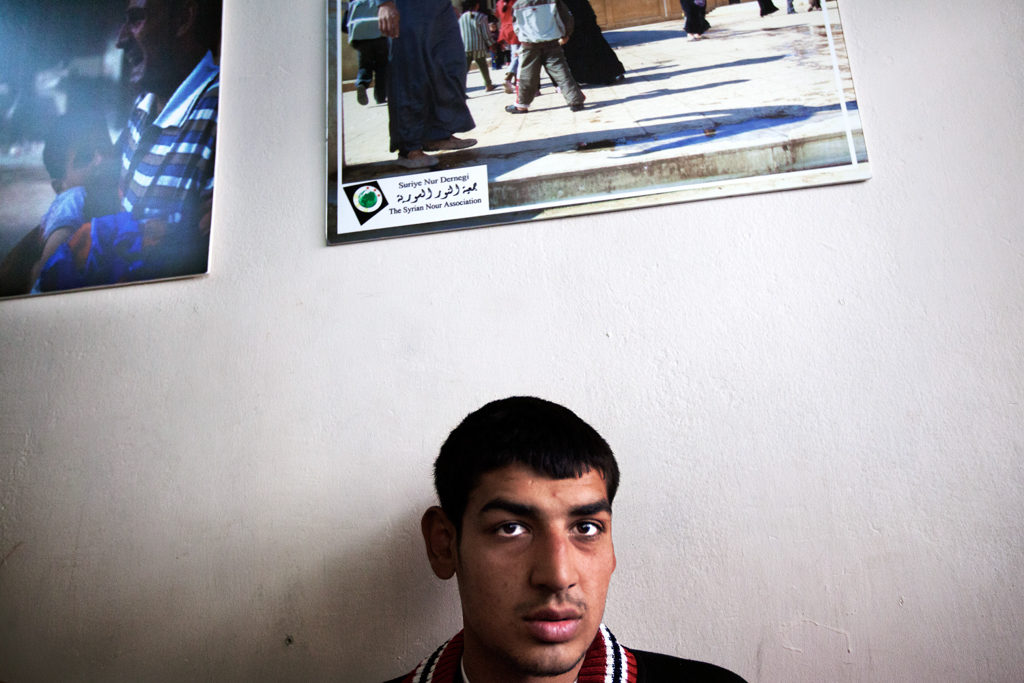 The Syrian community founded many associations that help Syrian refugees in Istanbul. Near Aksaray, the “Syrian Noor Association” provide with a doctor and a dentist. Some people suffer from post- traumatic Stress disorders, especially young people directly linked to war events happened in Syria, but the psychological support is not appropriate. 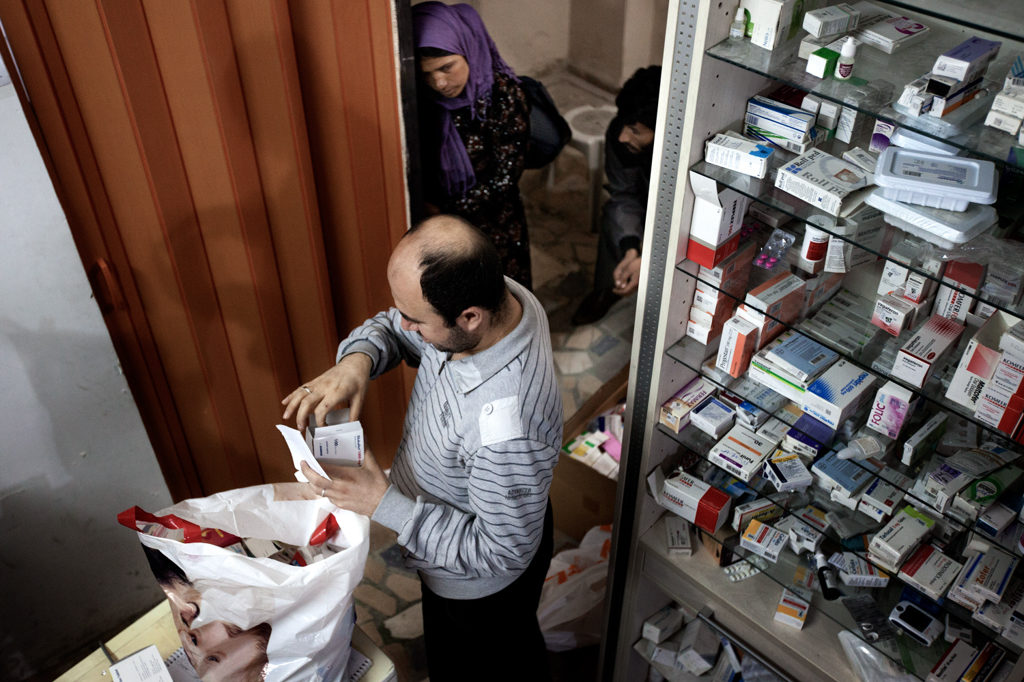 The “Syrian Noor Association” collects medicines in order to distribute them in the center or to send them every month to Syria. The Turkish Government allows them to do so, but doesn’t help in any way. 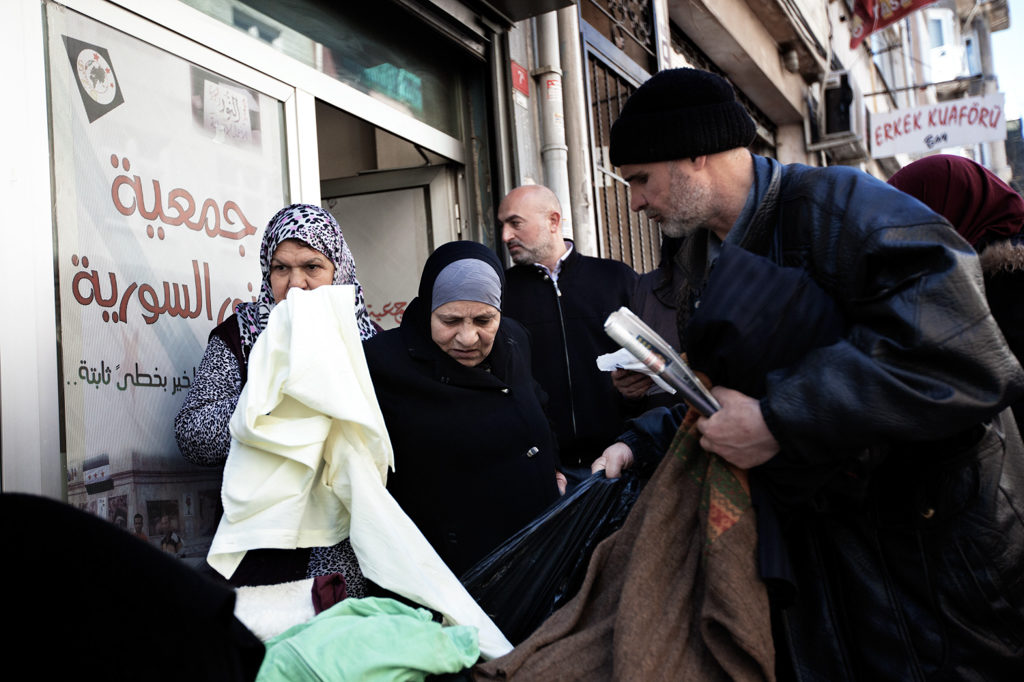 Every day many refugees come to the center to take the clothes that the Association and the Mosque collect for them. Families who flee from Syria leave all their things in their houses and usually arrive in Istanbul with nothing at all. 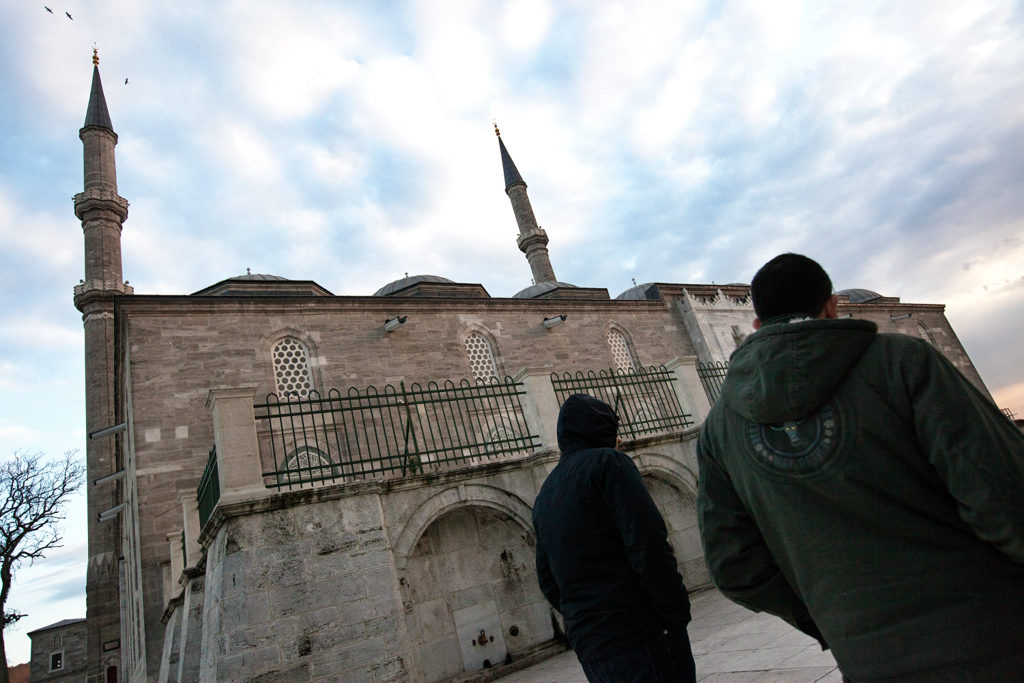 Syrian refugees who escape to Istanbul are usually Sunni muslims. Turkey, after Ataturk, has always been secular but after Erdogan the religion became part of the political life. Erdogan, in the beginning, helped Syrians in the name of religion in order to collect consent for the elections also in the Syrian community. Some Turkish refugees claim that Erdogan is a good muslim man but doesn’t help them. 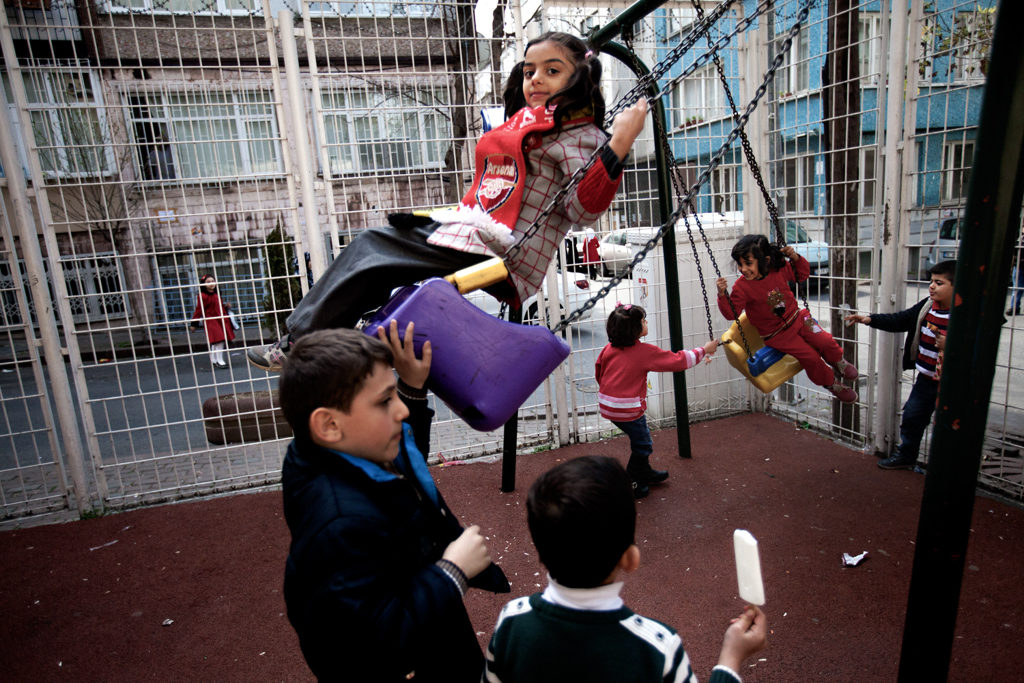 Syrian young people (from 0 to 17 years old) in Turkey account for about 55% of the refugees - reports UNHCR. Many of them have lived bad situations and saw war events very closely. Some of them suffer from psychological diseases due to what they have witnessed in Syria during the conflict. Several associations were founded by the Syrian community to try and help them. 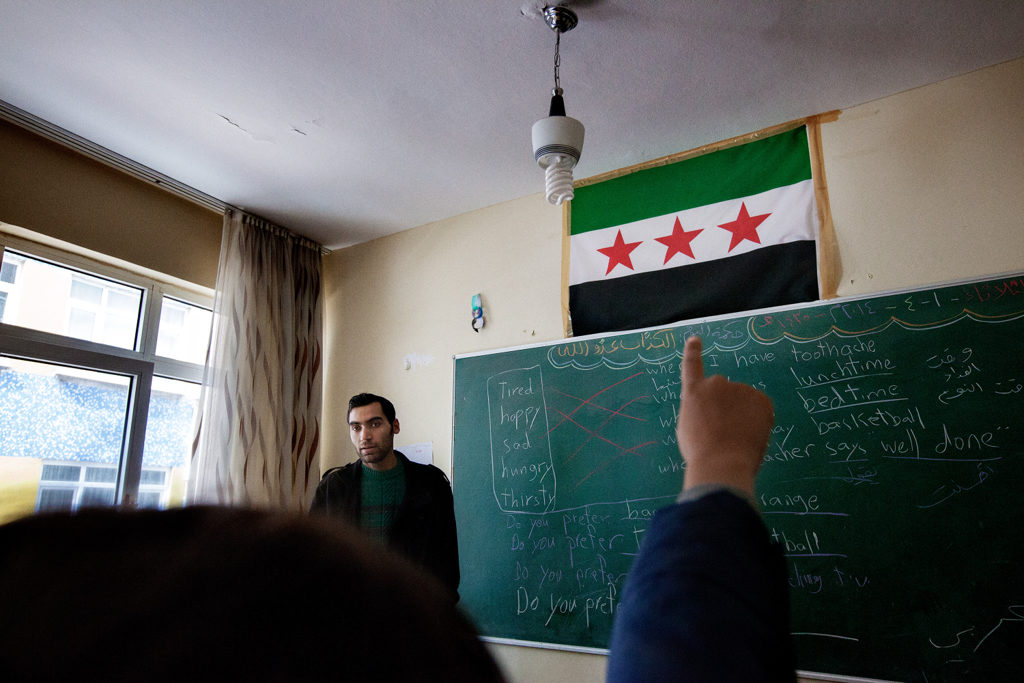 One of the first things that the associations try to recreate is the school, like in other countries where Syrian refugees are self- organized. Children here continue to study according to the Syrian program. Some books are re-written after deleting the praises of Assad. In school, also Turkish and English languages are taught. 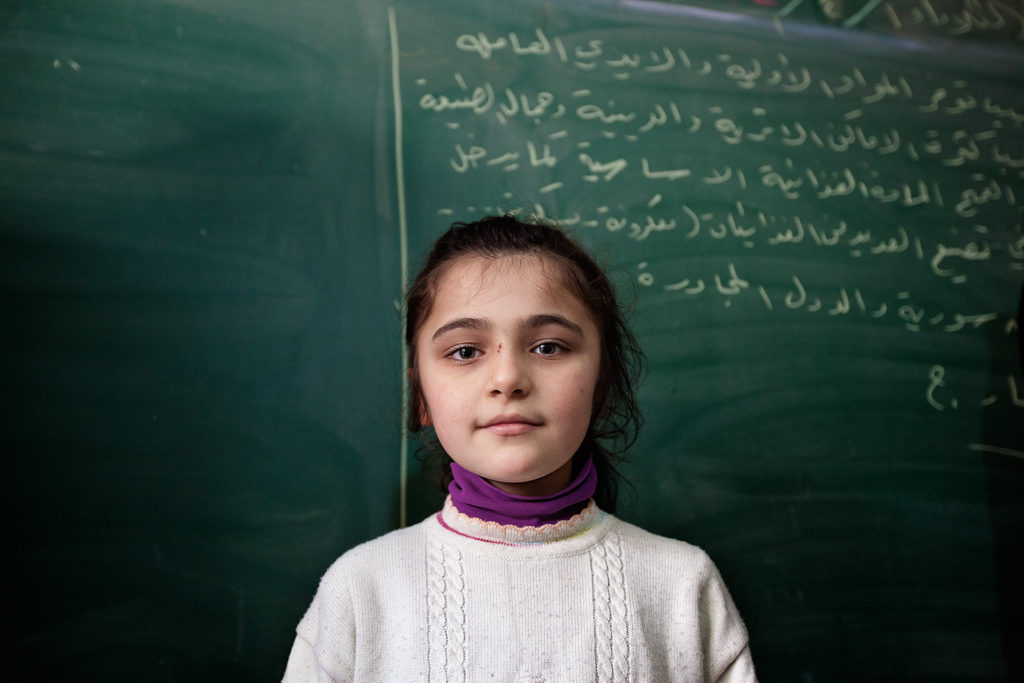 A little girl sings a song about war. “We came to your feast. Through your celebration we are asking you, why now we don’t have even any feast? O’ World, my land is burned, my free land is stolen. Our sky is dreaming, asking days, where is the beautiful shiny sun? Where are the pigeons folks? My little land, like me little, give it back peace and give us back our childhood. Give us our childhood Give us, give us Peace.” 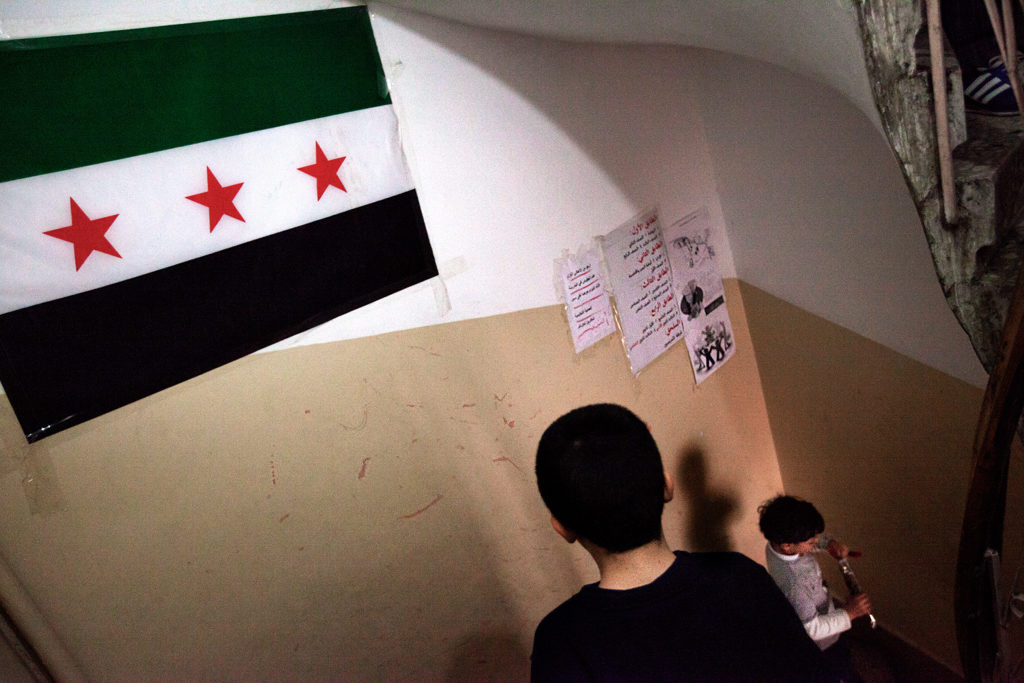 The flag used by the revolutionaries is still hung in all classrooms. Some school publicly took a stand in support of the Syrian revolution hanging on the walls the flag that represents it. 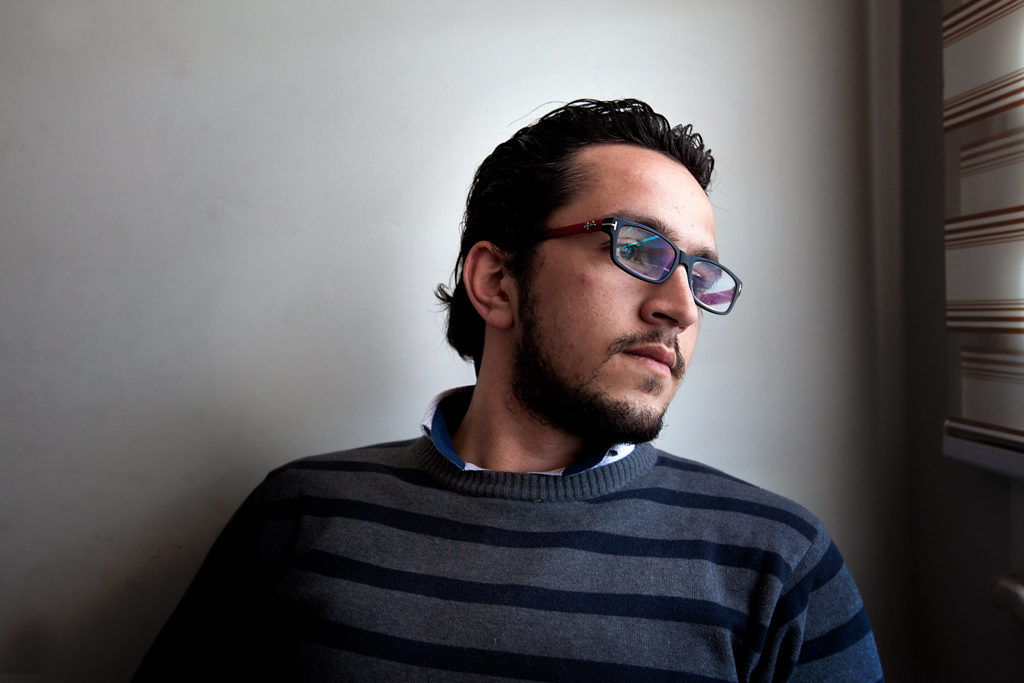 A 23 year-old man from Damascus. He came to Istanbul at the beginning of 2013 after fleeing from Aleppo. After graduating in computer science in Syria, he escaped in order to teach turkish language to Syrians. In this school, men and women who want to try to settle in Istanbul take turkish language lessons. Without knowing the language it is hard to find a decent work. 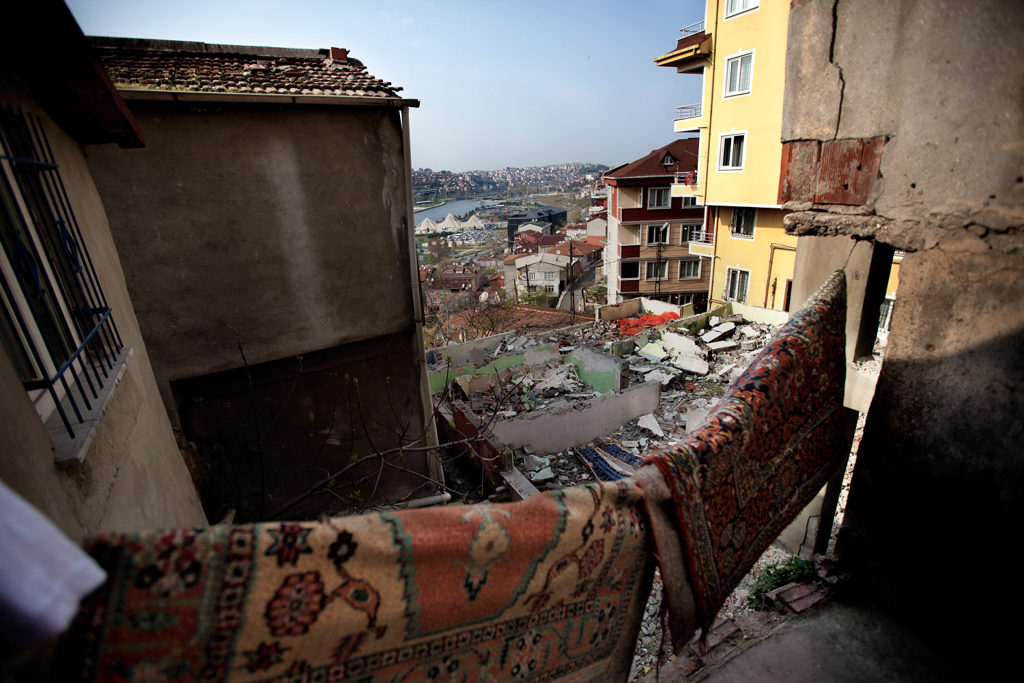 The middle-class people can rent a flat for 300/400Tl (125/165$) near the neighborhood affected by the restructuring plan that Erdogan has set up to re-build some areas of Istanbul. Usually the owner of the house is turkish and families try to find the money to pay the rent in any way. 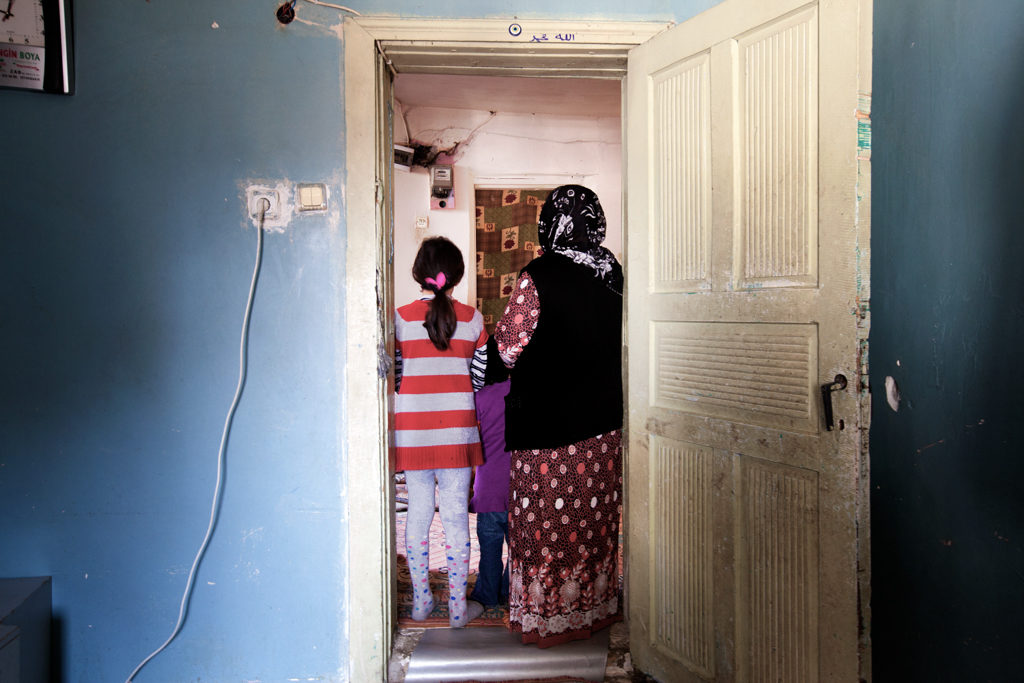 H. and her family live in a small house with two bedrooms and a kitchen. There are ten people leaving here, with seven children. All families fled from Damascus. The men of the family work as carpenters or bricklayers to raise the money to pay the rent and food. 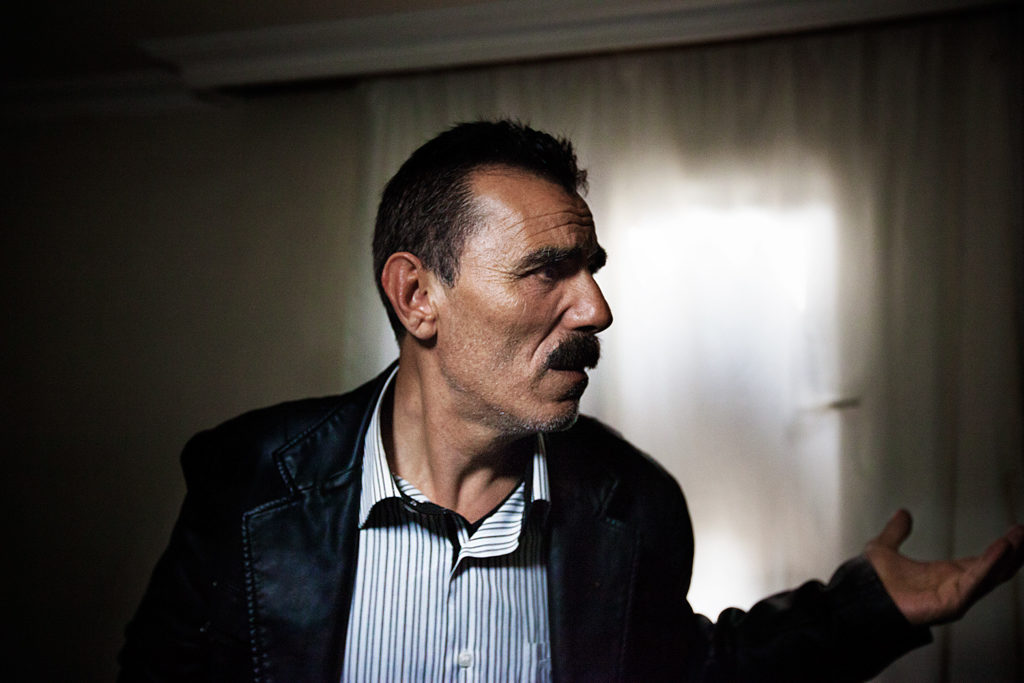 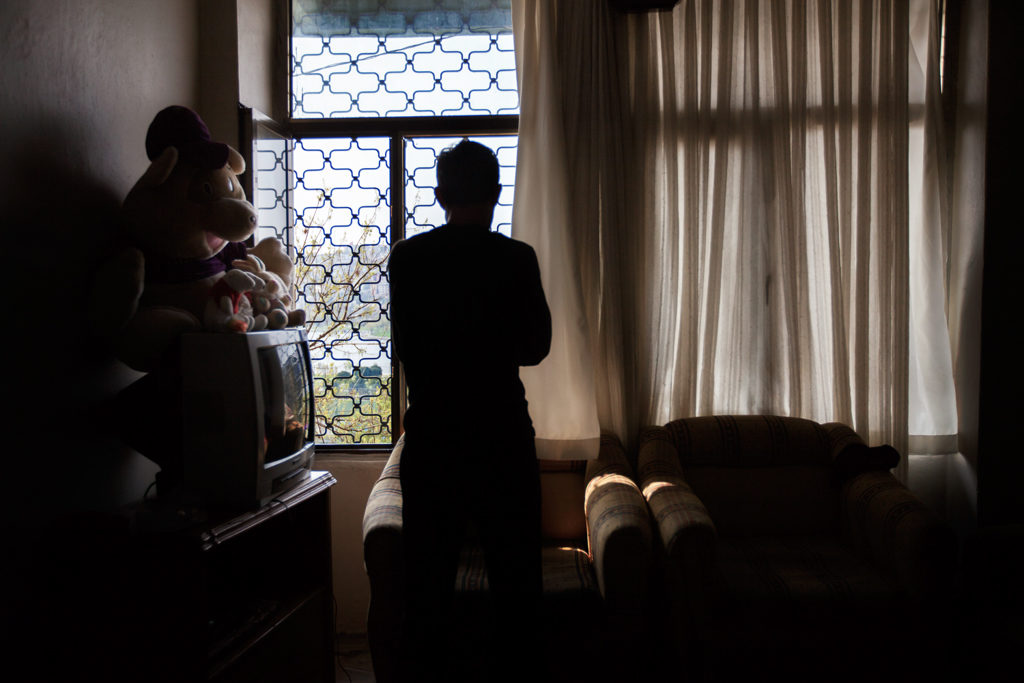 A., 33 years old, comes from the Kurdish region. He claims that the Assad regime gave the ID to Kurds and acknowledged the Kurd population after the war began. He left his village because there was a conflict between different Kurdish groups: some want the Assad’s regime to fall down, while others sustain the regime. 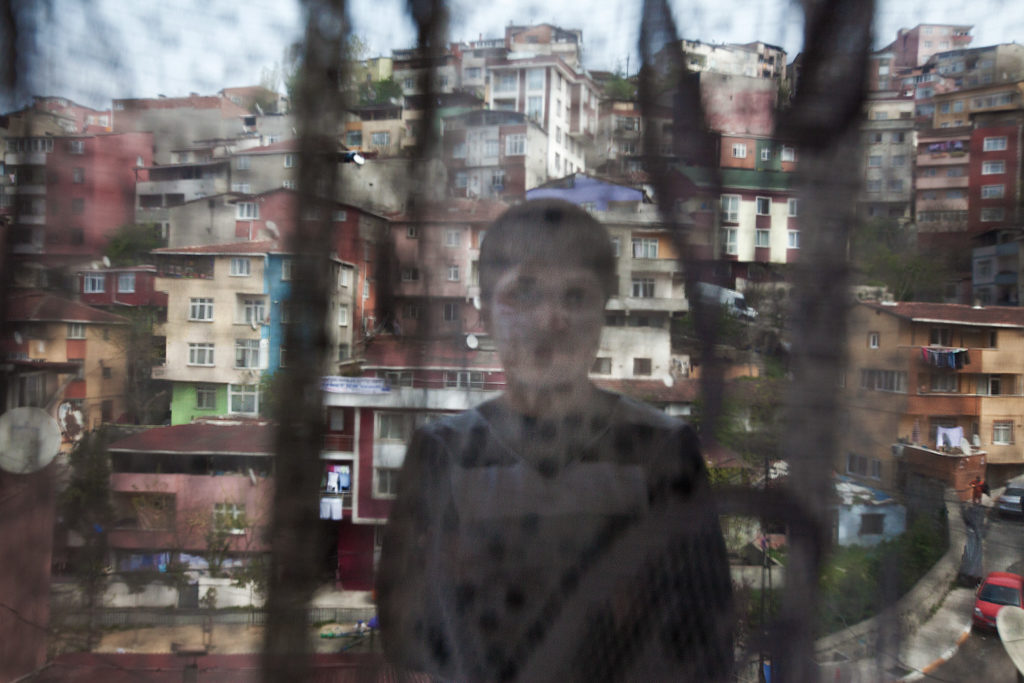 A., 16 years old boy from Hasakah. He and his family came to Istanbul on foot, helped by a smuggler, after having paid 200$ per person. He doesn’t go to school and works until fourteen hours a day as a button sewer to raise 150 Tl (65$) per week to pay the rent of his house. 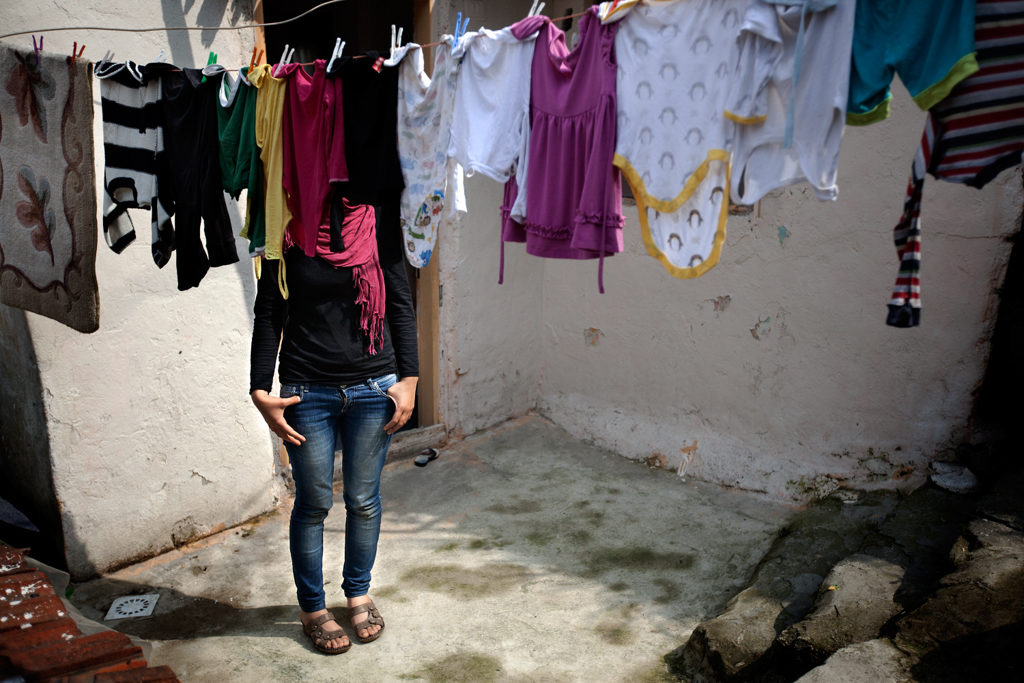 A. comes from Damascus and is in Istanbul from one year. When the war started in Syria she was pregnant. Her husband found a job and can pay the rent of the house, which they share with another family. In this neighborhood, far from the touristic center of Istanbul,Turkish people are more polite and help Syrians by giving them some food. Also the Mosque helps refugees giving them bread and rice. 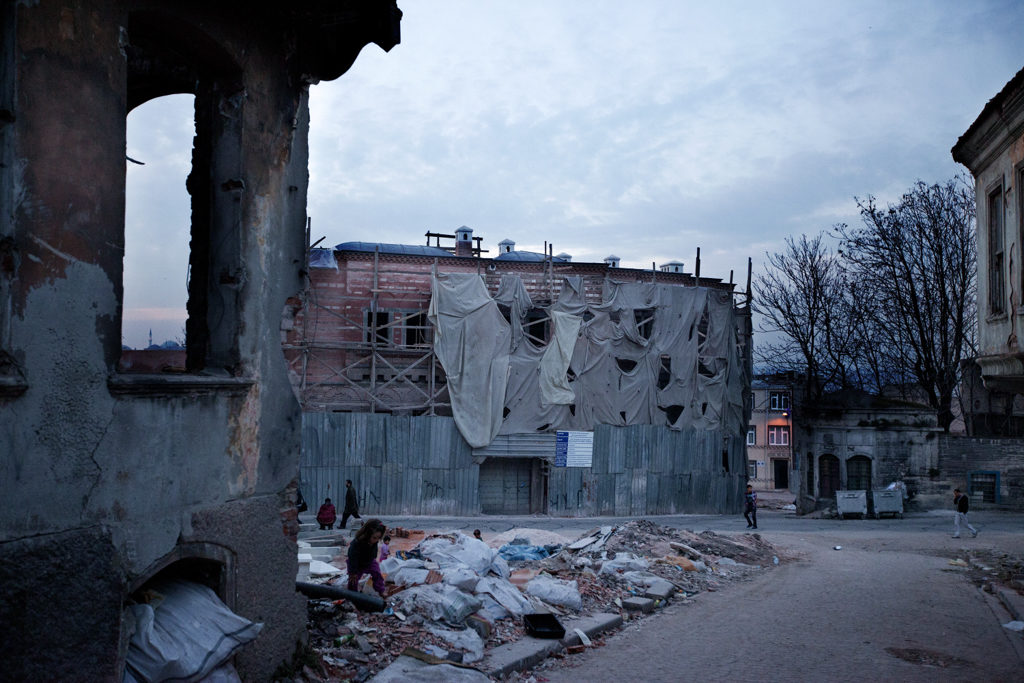 In the poorest neighborhoods, refugees can find a small room for 100/200Tl (40/80$). Sometimes it happened that refugees occupied empty houses. Life here is very hard because usually rooms don’t have heating and running water, the situation is very bad and they wonder why nobody does anything. 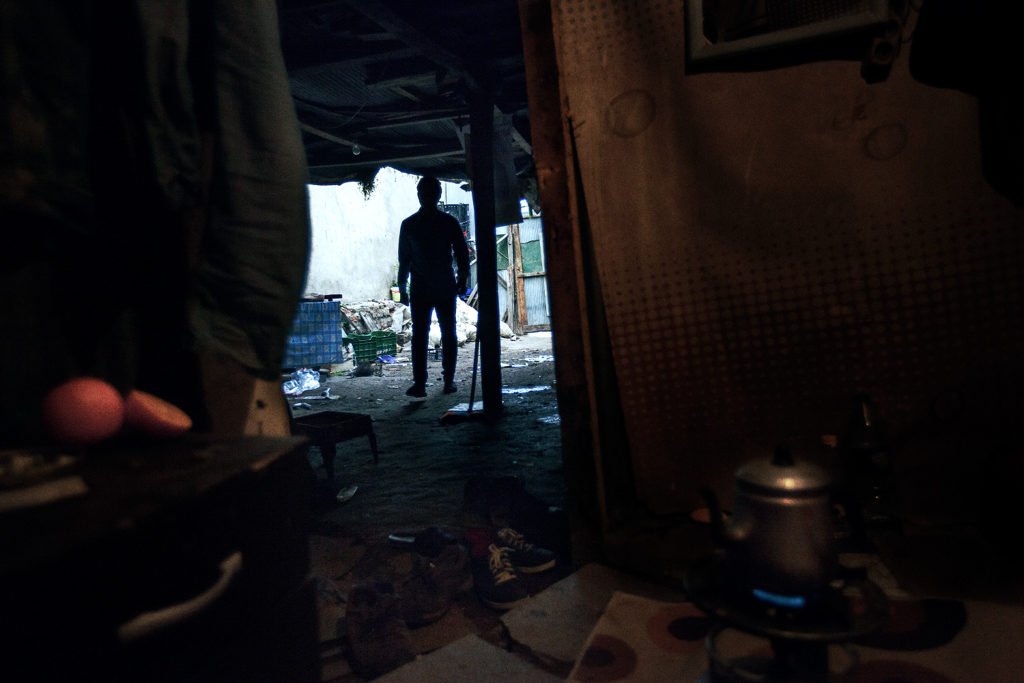 H., 27 years old from Homs. He was studying mechanical engineering in Syria. He is in Istanbul to collect money to continue his studies in Syria when the war ends. He wants to graduate and go back to Syria to rebuild it. He lives in a shelter made with a truck tarpaulin. He works as a bricklayer in Istanbul and washes oranges and apples as a second job.The shelter is under a tree and it was built by himself. 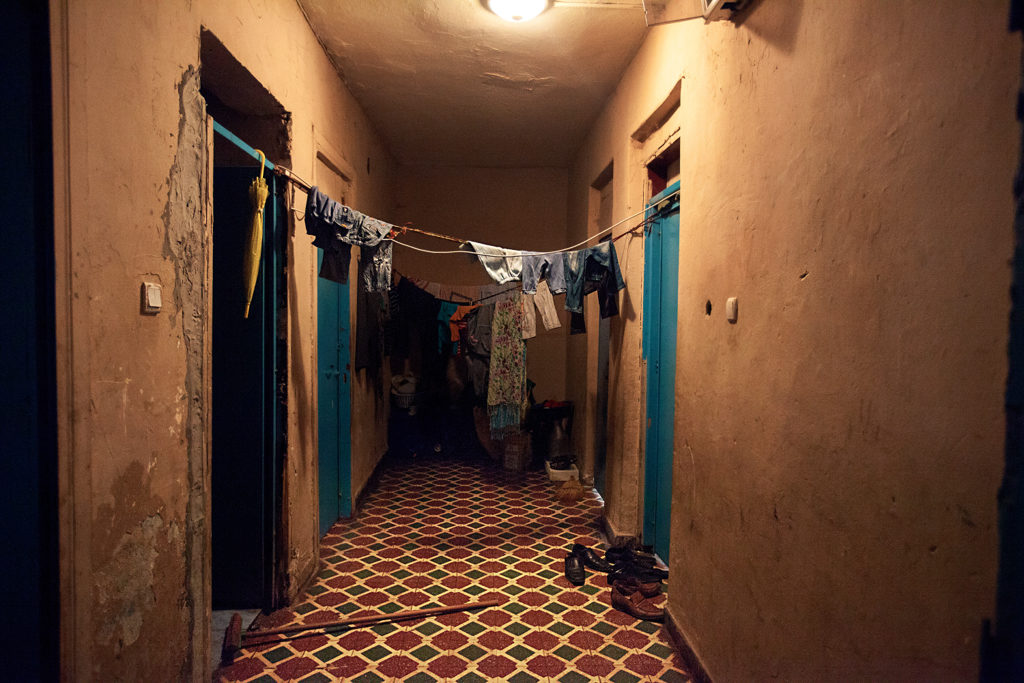 The hygienic situation in the poorest buildings is bad. There is no heating nor drinkable water. Every family rents a room no larger than 25 square meters and usually has only a small window. The restructuring plan of Erdogan aims to destroy this old building to erect a new one that Syrian refugees couldn’t rent. 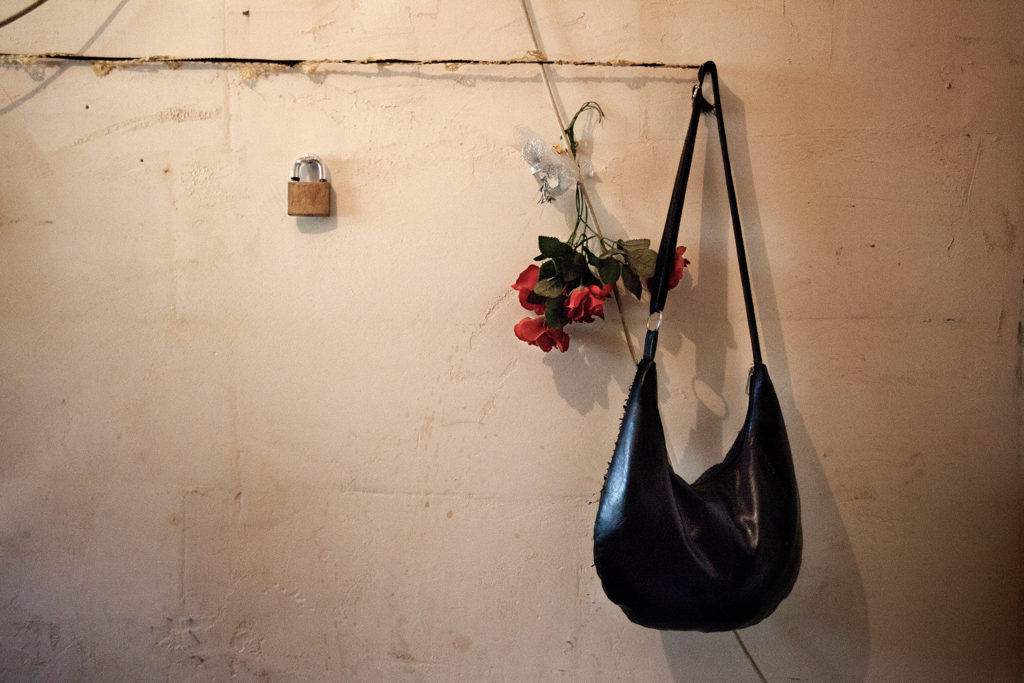 Often families have been forced to split due to the war. Many mothers and wives have sons and husbands who fight in a war that has continued for the past four years. Women take care of their children and are forced to walk several kilometers every day to go and get the aid given by associations. Women complain that after an initial moment, when both the Turkish government and the international associations had given first aid to people, they were left to themselves. 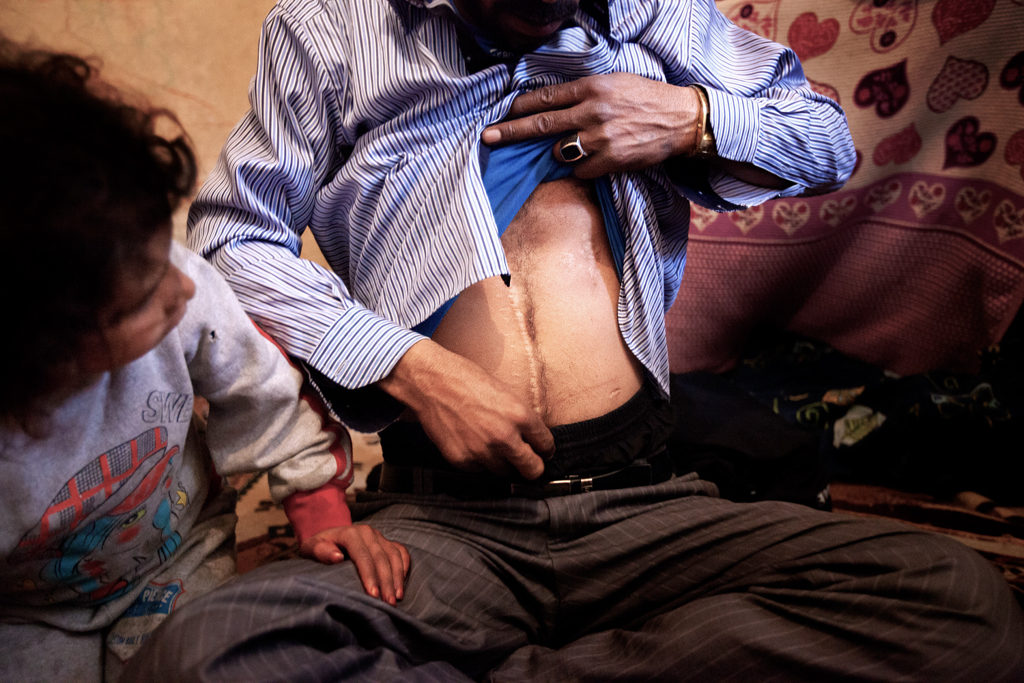 B., 35 years old man escaping from Aleppo was wounded and, after having surgery, came to live in a room with his family. He can’t work nor walk very well. “We were escaping from Aleppo and a rocket fell close to the car. Splinters exploded and stroke me to the stomach and the leg. When I arrived to Turkey, in the center, they fixed my wounds. Thank God I survived, but now the situation is very bad, we are left to ourselves and we don’t know what the future holds. I think I want to go back to my country when the war ends, I have my land in Syria. Inshallah”. 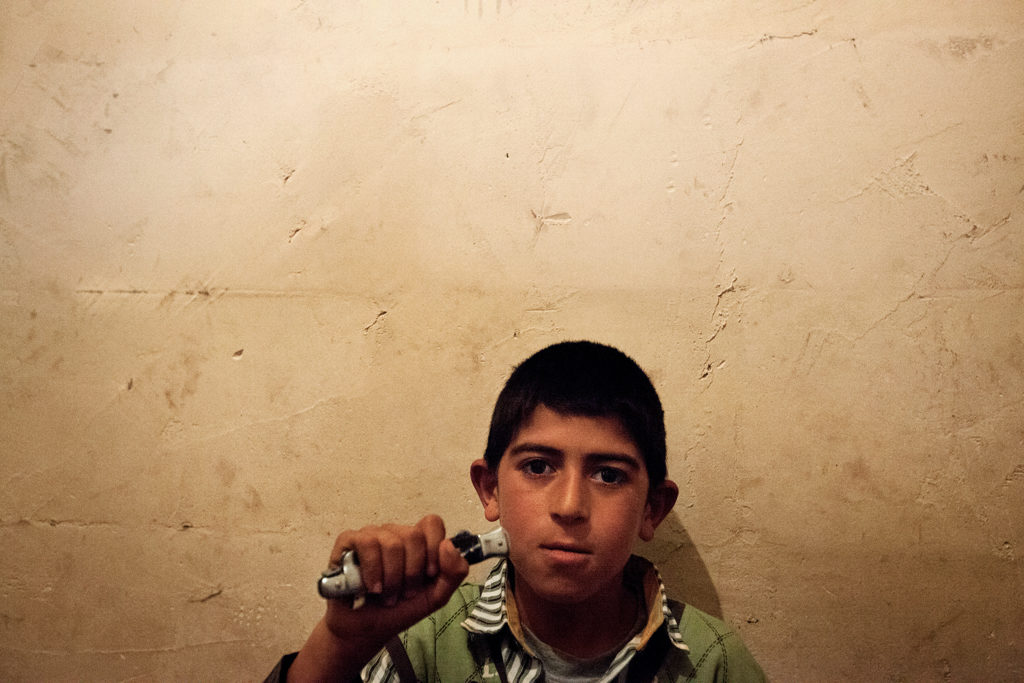 Children who can’t afford to go to school wander through the Istanbul center seeking handouts or finding illegal jobs where they are exploited working till forteen hours a day to raise little money. 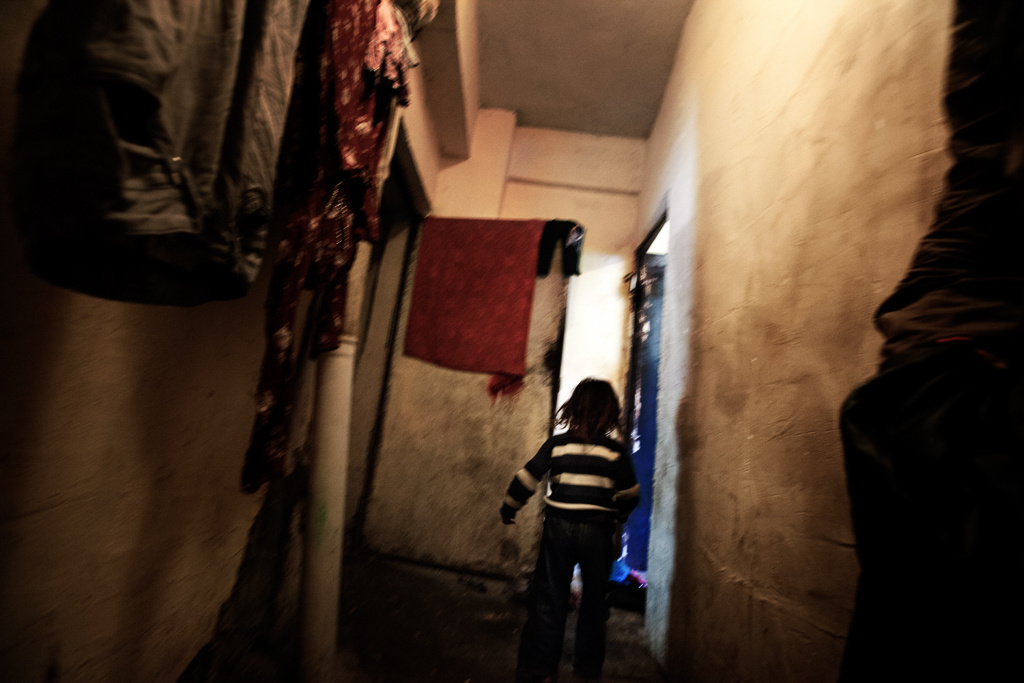 The situation is still precarious. Since 2014 several demonstrations against Syrian refugees were made. At first welcomed by former Prime Minister Erdogan, Syrians were then left to themselves. Those who can will try to emigrate and seek asylum in Europe, but an increasing number of Syrian refugees are forced to live in a limbo of uncertainty, while they wait for the war to end to return to their country.